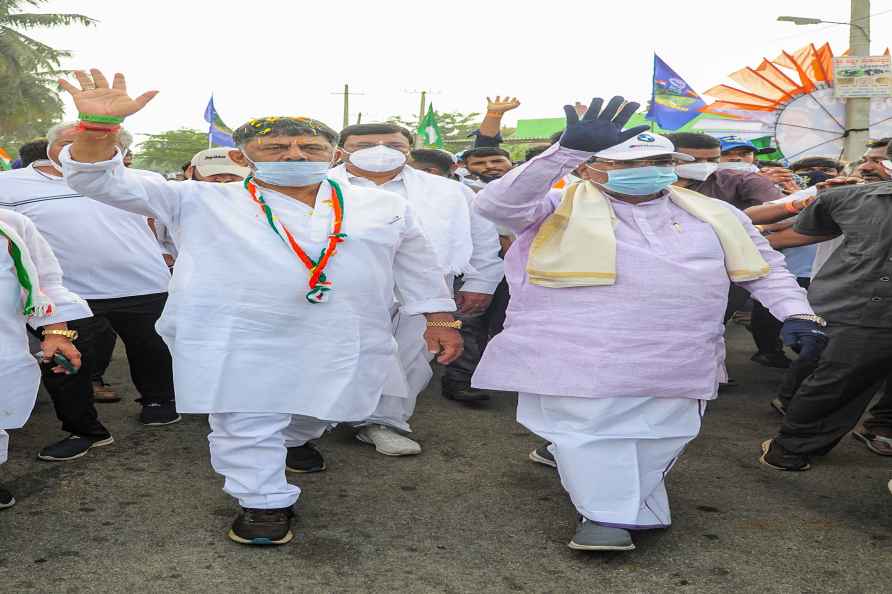 [Chikkenahalli: Former Chief Minister Siddaramaiah and KPCC President D K Shivakumar during the fourth day of the 10 day padayatra from Mekedatu to Bengaluru to demand the implemention of Mekedatu water project in Chikenahalli near Bengaluru, Wednesday, Jan. 12, 2022. ( /PTI] Bengaluru, Jan 12 : Slamming the Congress for organising a ten-day 'padayatra' demanding speedy implementation of Mekedatu project by the ruling BJP in Karnataka, state Home Minister Araga Jnanendra on Wednesday stated that hundreds of participants in the rally are Covid positive. "I have information that hundreds of people who are taking part in the padayatra are Covid positive. Some of the leaders who participated have already tested positive and under treatment. Several of the leaders are participating despite testing positive," he alleged. Before the 'padayatra', the number of cases in Ramnagar and Mandya districts were very less. After the inauguration of padayatra, both districts are witnessing a surge in Covid cases, he said. Araga Jnanendra had earlier said that Congress leaders will have to take responsibility if the situation of lockdown arises in the state because of the event. He had also stated that the government will make a decision after discussion to prevent padayatra from entering Bengaluru. Some of the statements by the Congress leaders are detrimental to the interests of the state on the Mekedatu project as the matter is being taken up by the Supreme Court soon, he stated. If the surge in cases continues, there may be a situation of imposing lockdown in the state. Some of the states in the country have already imposed a lockdown. However, lockdown is our last option, he stated. However, the 'padayatra' continued on the fourth day. Congress state President D.K. Shivakumar and Opposition leader Siddaramaiah are leading the protest march participated by thousands of people and party workers. The padayatra was inaugurated on January 9 and will conclude on the 19th. /IANS

Islamabad, May 20 : Pakistan remained in the grip of speculation that the country's "establishment" had started consultations over the formation of an interim government, ahead of possible early elect […]

Inter-state boundary dispute between Assam, Arunachal to be resolved by next year: Union HM Amit Shah.

Inter-state boundary dispute between Assam, Arunachal to be resolved by next year: Union HM Amit Shah. […]

Russia won't export food to the detriment of its own market

Moscow, May 20 : Russia will not export food to the detriment of its own market, Deputy Chairman of Russias Security Council and former President Dmitry Medvedev said. In a lengthy Telegram post […]