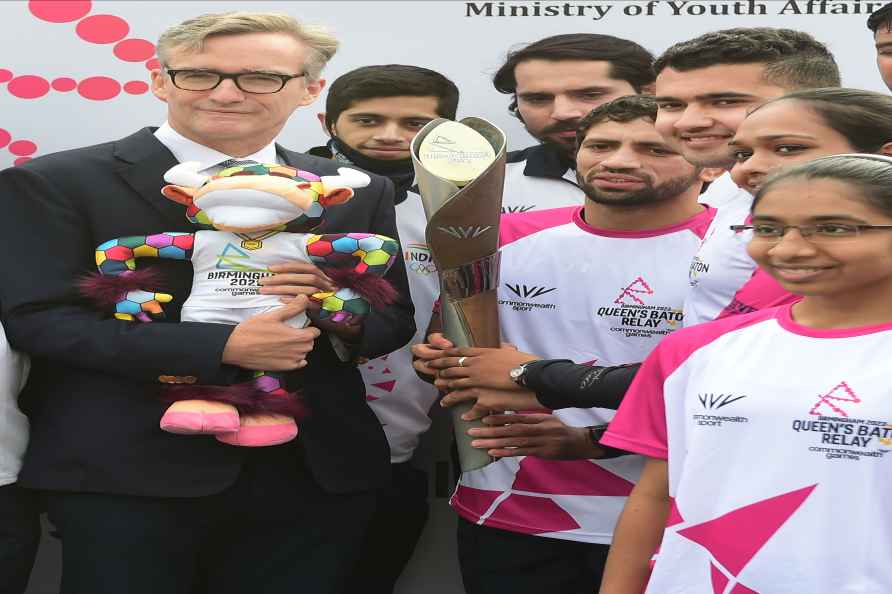 [New Delhi: British High Commissioner to India, Alex Elis hands over the Queen's Baton for the Birmingham Commonwealth Games to Olympic Silver medallist wrestler Ravi Dahiya, at Dhyan Chand National Stadium, in New Delhi, Wednesday, Jan 12, 2022. ( /PTI] New Delhi, Jan 12 : Haryana-based golfer Diksha Dagar and Judoka Yash Ghangas have been included in the Target Olympic Podium Scheme (TOPS) in the Core and Development groups respectively. The 21-year-old left-hander Diksha Dagar, who is from Jhajjar in Haryana and is a silver medalist in the 2017 Summer Deaflympics, finished 50th in the Olympic Games last year. Yash, meanwhile, rose from Panipat in Haryana to express himself on the mat. The Sports Ministry primarily supports elite athletes under the Annual Calendar for Training and Competition (ACTC) of each National Sports Federation. TOPS provides customised support to athletes in areas not covered under the ACTC and addresses unanticipated needs of the athletes as they prepare to excel in the Olympic and Paralympic Games. Financial assistance for Bajrang and Sunil The Sports Ministry's Mission Olympic Cell (MOC) has approved financial assistance for wrestlers Bajrang Punia and Sunil Kumar for foreign exposure training. Bajrang, bronze medalist at the Tokyo Olympics, was earlier approved an amount of Rs 7.53 Lakh for a 26-day training camp in Moscow ahead of a busy season. He is now supported with an additional Rs 1.76 Lakh for his ongoing camp that started on December 27. The 26-day camp concludes on January 2021. Jitender and Anand Kumar have accompanied Bajrang as his sparring partner and physiotherapist respectively. Bajrang is set to compete in international meets including UWW Ranking events, the Commonwealth Games in Birmingham as well as the Asian Games in Hangzhou, China. "I have to compete in Ranking Series in Italy and Turkey this February and then the Asian Championships in Mongolia in April. I'm going to give my best as I aim is to change the colour of my medal in Paris 2024," Bajrang said. Greco-Roman wrestler Sunil Kumar, meanwhile, has been approved an amount of Rs 10.85 Lakh towards a special training camp at Romania and Hungary with his sparring partner and coach. Sunil, who is a part of the TOPS Development group, will be using the foreign exposure trip to prepare for the upcoming United World Wrestling Ranking events. Sunil had won the gold medals in the Senior National Championships 2019 and 2020, Asian Championship 2020 and the Senior Nationals in 2021. /IANS

Kashmir: Army never says no to people in distress, lends helping hand in snow-bound areas
[Upper Darby:A medical helicopter rests next to the Drexel Hill United Methodist Church after it crashed in the Drexel Hill section of Upper Darby, Pa

While there has been partial engagement, the threat by no means has reduced: Army Chief Gen M M Naravane on eastern Ladakh border row.

While there has been partial engagement, the threat by no means has reduced: Army Chief Gen M M Naravane on eastern Ladakh border row. […]

Agartala: People pay tribute to Swami Vivekananda during a programme on his birth anniversary, in Agarata, Wesdnesday, Jan. 12, 2022. ( /PTI […]