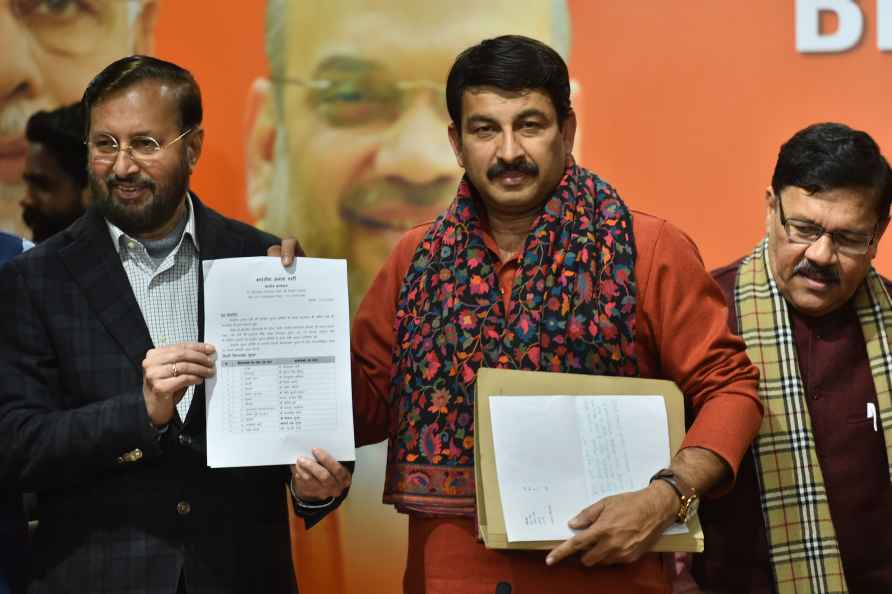 New Delhi, Jan 10 : Except in Goa, the Congress party has not announced any list of candidates in the states going for polls. The Congress Central Election Committee is scheduled to meet on Monday to finalize tickets for phase 1 elections in UP and the first list for Punjab, Manipur and Uttarakhand. The Congress meeting will be held virtually in wake of Covid situation. The party's screening committees for states have filtered the names of the probable candidates which have been sent to the central panel. The Congress in Uttarakhand has more or less decided to give one ticket per family which has been an issue of conflict as some leaders want ticket for their kin, but sources say that this criteria may be waived for winnable candidates. In UP, the party has decided to give 40 per cent ticket to women and the party is likely to release the first list with the same quota to keep the momentum going. In Punjab, the Congress will have a risk in ticket distribution with state president Navjot Singh Sidhu asserting for more tickets to his supporters, so the party has to balance itself in ticket distribution. In Goa, the party has already released two lists but many leaders are upset that their name has been ignored by the party. The Congress has decided not to project Chief Ministerial face to overcome internal rift. Congress sources say that it will only be decided after the results and Congress legislature party will decide the new leader with the consent of the high command as except at few occasions, the party has not projected a chief minister's face. The Congress leaders in Punjab and Uttarakhand want to project the face of Chief Minister as supporters of Harish Rawat, former Uttarakhand CM and Navjot Singh Sidhu, the Punjab unit chief want to be projected as Chief Minister's face. But Congress will not take risk to alienate the other factions ahead of polls. /IANS

Muslim leaders take a step forward to ease unrest situation in K'taka
Bengaluru, May 17 : In a bid to calm the simmering unrest in Karnataka, Muslim community and religious leaders are urging people to postpone the use o

No protests will be allowed in Delhi CM's residence area: Delhi Police to HC
New Delhi, May 17 : The Delhi Police on Tuesday apprised the Delhi High Court that it has restricted protests at the Civil Lines Metro station, the ar

Ishan Mishra gets candid about his role in 'Janhit Mein Jaari'

Mumbai, May 17 : Actor Ishan Mishra, who is best known for his performances in 'It's Not That Simple 2' and 'Laakhon Mein Ek 2' is all set to make his film debut with 'Janhit Mein Jari' starring along […]

**EDS: HANDOUT PHOTO MADE AVAILABLE FROM MINORITY AFFAIRS MINISTRY ON WEDNESDAY, MAY 18, 2022.** Agra: Union Minister for Minority Affairs Mukhtar Abbas Naqvi during his visit to Hunar Haat in Agra. ( […]

[**EDS: TO GO WITH STORY FGN48** Kartarpur: Mumtaz Bibi meets her brothers after getting separated from her family during Partition in 1947, at Kartarpur in Pakistan's Punjab province, Wednesday, May […]

New Delhi, May 17 : The government has announced some relaxation to its recent order on restrictions of wheat exports. It has now decided that wherever wheat consignments have been handed over t […]