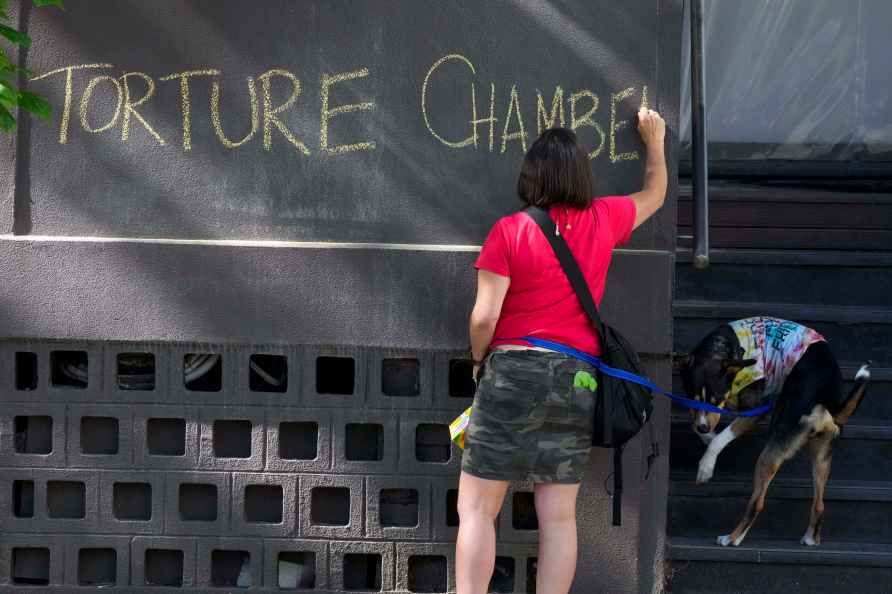 [Melbourne:A refugee advocate writes a slogan on the wall outside the Park Hotel, used as an immigration detention hotel where tennis player Novak Djokovic is confined in Melbourne, Australia, Sunday, Jan. 9, 2022. After five nights in hotel detention Djokovic will get his day in court on Monday, Jan. 10, in a controversial immigration case that has polarized opinions in the tennis world and elicited heartfelt support for the star back home in his native Serbia. /PTI] Ramnagar (Karnataka), Jan 10 : The Congress' padayatra (protest rally) in Karnataka, demanding speedy implementation of the Mekedatu project across the Cauvery river has entered its second day. The Congress leaders will march 16 km on Monday to reach Kanakapura city by night. The 10-day padayatra is being led by state Congress President D.K. Shivakumar. Despite Covid-19 restrictions and curfew imposed by the Karnataka government, thousands are participating in the padayatra, raising concerns over rapid spread of the virus. The Congress has announced that no matter what, the party would continue the padayatra. On Sunday night, Shivakumar refused to undergo Covid test after the completion of the first day of the protest march at his native place, Doddahalalli. He took the health officer to task and said he is fit enough to walk 15 km since morning. "It is shameful for Chief Minister Basavaraj Bommai to indulge in such tactics to scuttle the padayatra. Let him (CM Bommai), Home Minister Araga Jnanendra and Health Minister K. Sudhakar take Covid tests. I can carry Home Minister on my shoulder and walk. I know my rights. I will not get tested," he said. Opposition leader Siddaramaiah could not participate in the padayatra as he had fever and went back to Bengaluru after the inauguration. However, the march managed to evoke tremendous response from people of the state. Villagers en route gave a warm welcome to the Congress leaders and showered flowers on them as they walked through the villages. The leaders even danced to the beats of drummers and folk artistes while walking during the rally. On Monday, padayatra will stop for lunch in Madappanadoddi village and reach Kanakapura by night. /IANS

Finance Minister Nirmala Sitharaman said on Tuesday the country's trade pacts with the UAE and Australia will chart the way for economic growth. Speaking at the stakeholders' outreach programme on […]