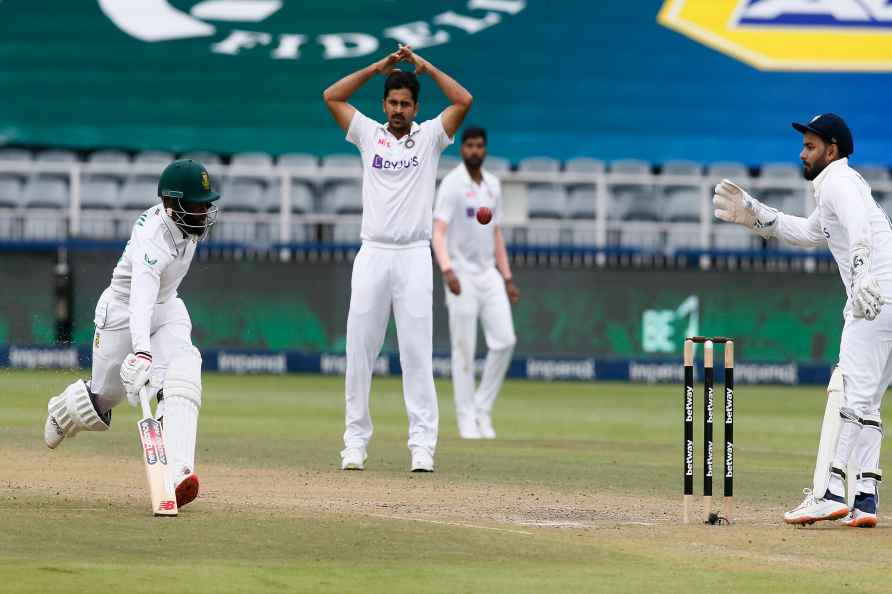 Johannesburg, Jan 6 : Persistent rain at the Wanderers has washed out the first session of day four in the second Test between South Africa and India here on Thursday. Lunch has been taken after a single ball was not bowled in the opening session of day four due to rain coming in on and off mode from morning with covers on the pitch and square area. As per the weather forecast, rain along with thunderstorms have been predicted for the entire day. Though the recent update suggested there could be some sun from 1-4pm local time, rain and clouds have been shown as well. "RAIN CONTINUES. There's been no change to the weather yet at Imperial Wanderers as rain continues to keep play at bay," said a tweet from Cricket South Africa (CSA). "Rain has washed out first session on Day four here at The Wanderers. Let's hope the weather gets better. We will be back for further updates shortly," read a tweet from the Board of Control for Cricket in India (BCCI). Coming to the match, South Africa captain Dean Elgar was gutsy in leading the way for his team with the bat as the hosts' finished at 118/2 in 40 overs at stumps on day three. With two days left in the match, South Africa need 122 runs to level the series while India need eight wickets to script their first-ever series victory in the 'Rainbow Nation'. India had set a target of 240 for South Africa after being all out for 266. Cameos from Shardul Thakur (28) and Hanuma Vihari (40 not out) took the lead past 200 after a stand of 111 runs off 144 balls between Cheteshwar Pujara (53) and Ajinkya Rahane (58) set the base for India to pose a tricky target for South Africa. For the hosts, Kagiso Rabada, Marco Jansen and Lungi Ngidi took three wickets each. Brief scores: India 202 & 266 in 60.1 overs (Ajinkya Rahane 58, Cheteshwar Pujara 53; Kagiso Rabada 3/77, Lungi Ngidi 3/43) against South Africa 229 and 118/2 in 40 overs (Dean Elgar 46 not out, Aiden Markram 31; Ravichandran Ashwin 1/14, Shardul Thakur 1/24), South Africa need 122 runs to win. /IANS