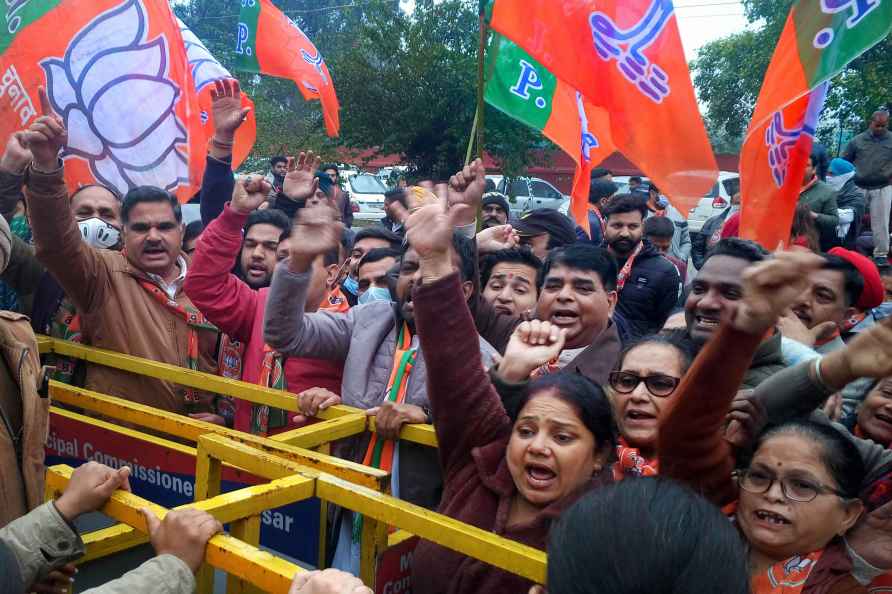 [Amritsar: Bharatiya Janata Party (BJP) workers shout slogans during a demonstration outside the District Collector's office against the Punjab Government over alleged security lapse during Prime Minister Narendra Modi's visit to Ferozepur, in Amritsar, Friday, Jan 7, 2022. ( /PTI] New Delhi, Jan 7 : Even as the Congress seems to be a divided house on the issue of Prime Minister's security breach, party MP from Punjab Manish Tewari on Friday termed the two different probes by the Centre and state as a case of polarising. He demanded that there should be one probe committee. "Speaks of Polarising times we live in-Even on a sensitive issue concerning security of @PMOIndia, @PunjabGovtIndia & GOIA have ordered 02 separate probes.Both probes should be merged by SC today & 01 Inquiry by sitting HC/SC judge should be conducted," Tewari tweeted. Tewari on Thursday had demanded probe by a sitting HC Judge. The Centre has constituted a committee to probe the serious lapse in the security arrangements for Prime Minister Narendra Modi's visit to Ferozepur, Punjab on Wednesday. In a social media post, the spokesperson of the Ministry of Home Affairs said, "The Ministry of Home Affairs (MHA) has constituted a committee to enquire into the serious lapses in the security arrangements during Prime Minister Narendra Modi's visit to Ferozepur, Punjab, on January 5, which led to the exposure of the VVIP to grave security risk." The Punjab government on Thursday announced to constitute a high-level committee for a thorough probe into the lapses. An official spokesperson said the committee would comprise Justice (retd) Mehtab Singh Gill and Principal Secretary (Home Affairs) Anurag Verma. The committee will submit its report within three days. "We were told that the Prime Minister would fly by helicopter from Bathinda to Ferozepur. But all of a sudden, he decided to move by road. If there were any security lapses during PM Modi's visit, we are ready to probe the matter," Chief Minister Charanjit Singh Channi had earlier told the media . /IANS

Alina Kabaeva: Putin's alleged girlfriend and mother to some of his children
[Belgrade: A woman passes by a mural depicting the Russian President Vladimir Putin that reads: ''Brother'' vandalized with paint, in Belgrade, Serbia