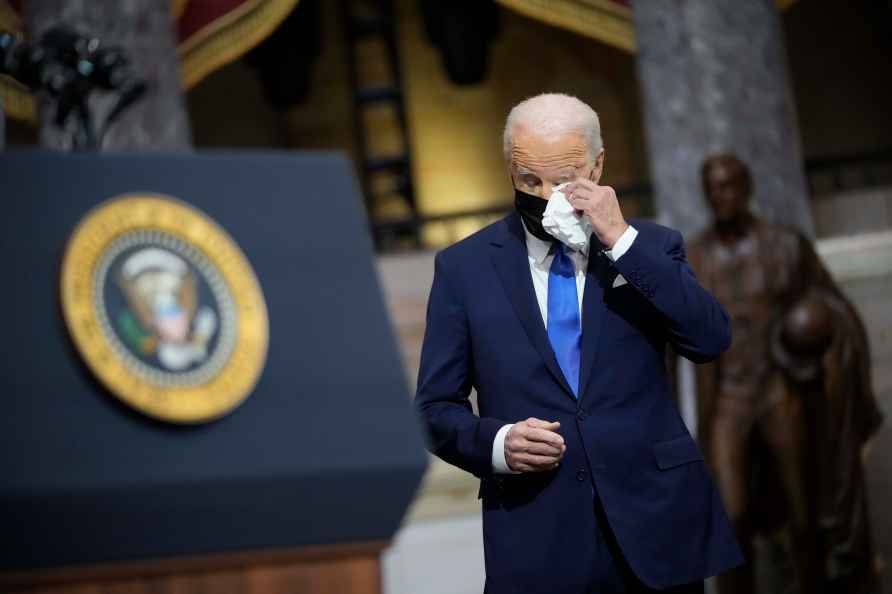 [Washington:President Joe Biden wipes his eyes as Vice President Kamala Harris speaks from Statuary Hall at the U.S. Capitol to mark the one year anniversary of the Jan. 6 riot at the Capitol by supporters loyal to then-President Donald Trump, Thursday, Jan. 6, 2022, in Washington. /PTI] Washington, Jan 6 : US Attorney General Merrick Garland said that the "perpetrators" involved in the January 6, 2021 Capitol riot must be held accountable and federal authorities would "follow the facts wherever they lead". "The actions we have taken thus far will not be our last. The Justice Department remains committed to holding all January 6 perpetrators at any level, accountable under law, whether they were present that day, or were otherwise criminally responsible for the assault on our democracy," Garland said on Wednesday while addressing Justice Department staff. "We understand that there are questions about how long the investigation will take, and about what exactly we are doing. Our answer is and will continue to be the same answer we would give with respect to any ongoing investigation: as long as it takes and whatever it takes for justice to be done consistent with the facts and the law," he said. Garland's remarks came as Thursday marks a year since a mob of then President Donald Trump's supporters stormed the Capitol building in an attempt to stop Congress from certifying the 2020 election results to Joe Biden. To date, the Justice Department has charged more than 725 individuals for storming the Capitol, and more than 150 rioters have pleaded guilty to charges, from assaulting police to felony obstruction, according to Bloomberg News. Democrats have denounced the Capitol riot as an attack on democracy, while most Republicans have downplayed its implications, especially Trump's alleged role of inciting it. The House select committee investigating the riot will continue to collect information, seek testimony from willing witnesses and examine the events leading up to the riot in the new year after six months of intense work. The committee plans to begin holding public hearings in the next few months, aiming to publish an interim report containing initial findings by the summer and deliver the final report in the fall. "We hope to be able to tell the story to the country so that they understand it isn't just about that one day, January 6, but all that led up to it. What happened on that day and the continuing danger going forward," House Intelligence Committee Chair Adam Schiff, a Democratic member of the select committee, told CBS News on Sunday. However, Americans are still divided on the performance of the select committee. About 53 per cent of Americans said the congressional probe is "important for the future of democracy", while 42 per cent called it "a waste of time away from other important issues", according to a poll released on Tuesday by USA TODAY/Suffolk University. /IANS