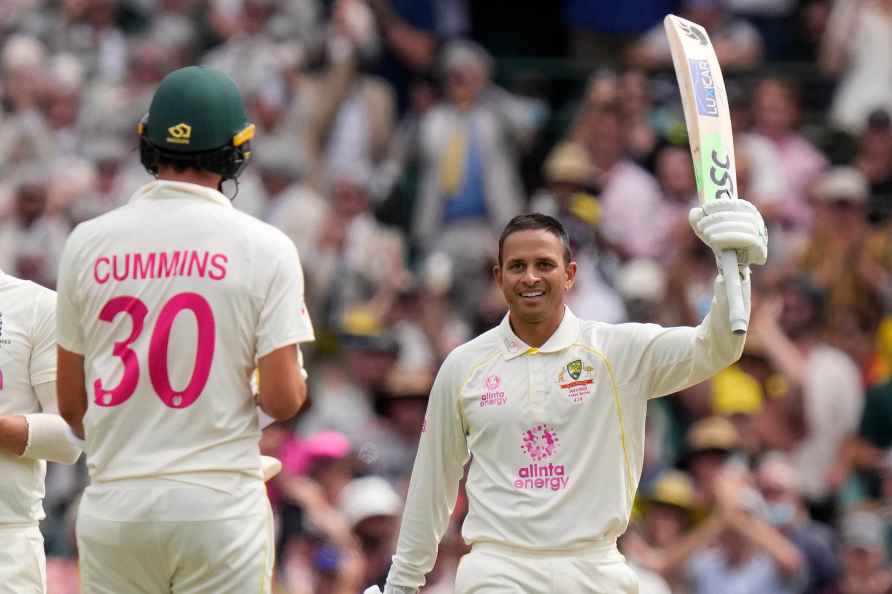 [Sydney: Australia's Usman Khawaja celebrates making 100 runs against England during the second day of their Ashes cricket test match in Sydney, Thursday, Jan. 6, 2022. /PTI] Sydney, Jan 6 : Left-handed batter Usman Khawaja smashed his ninth Test century (102 not out) and took Australia to 321/6 at Tea against England on the second day of the fourth Ashes Test, here on Thursday. Australia, who were 209 for 3 at lunch, added 112 runs and lost three wickets in the second session on Day 2 at Sydney Cricket Ground. Resuming the second session, English bowlers who looked flat in the first session, were lively after Lunch, led by top class Stuart Broad. He troubled Steve Smith 3-4 times in the sixth over after the break before having him caught-behind for 67, breaking the 115-run stand. The pacer then forced an under-pressure Cameron Green (5) to nick off too who opted to lunge and defend against Broad's seam bowling. However, it was an outstanding knock from Khawaja which kept the momentum going for Australia. The batter weathered through the tough phases to settle into the innings and has looked the most comfortable and composed. With the good partnership going on between Khawaja and Alex Carey, England skipper Root brought himself into the attack. He struck immediately, putting an end to Carey's innings in the middle with Jonny Bairstow taking a splendid catch behind midwicket. Pat Cummins took 22 balls to get off the mark but struck back-to-back fours against Malan to push forward Australia's total. Khawaja got to his century in the final over before Tea, having added 36 runs with Cummins in 51 balls for the seventh wicket. Brief scores: Australia 321/6 (Usman Khawaja 102 not out, Steve Smith 67; Stuart Broad 3-60) vs England. /IANS