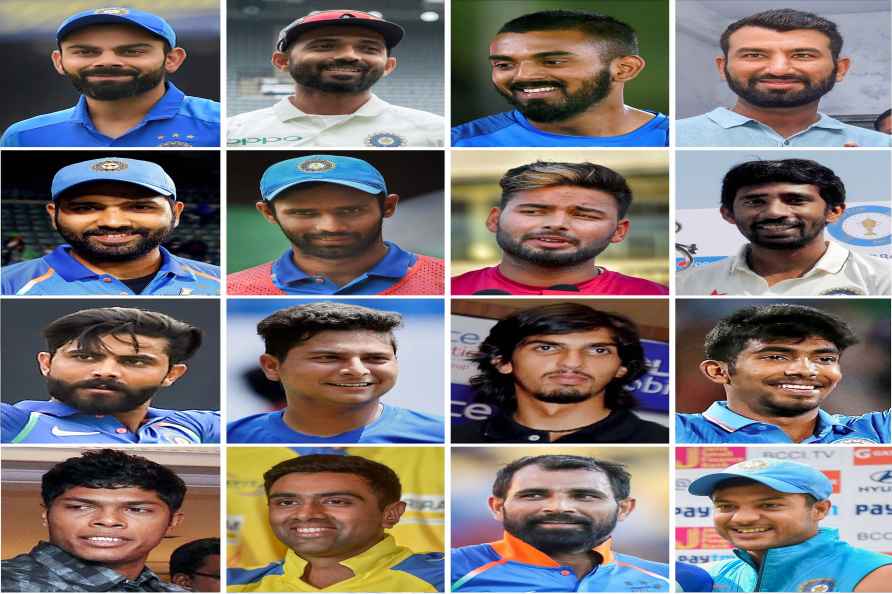 Johannesburg, Jan 3 : Dean Elgar and Keegan Petersen took South Africa to 35/1 at stumps and trailing India by 167 runs on day one of the second Test at the Wanderers on Monday. On a day that saw eleven wickets fall for 237 runs, South Africa kept themselves on top after a solid bowling performance, led by Marco Jansen's 4/31, helped them restrict India to 202. After being bowled out for a modest score, Mohammed Shami gave India the first breakthrough as Aiden Markram was trapped plumb in front of the wicket. Shami got the ball to skid in from a good length and Markram tried to defend but was beaten and struck on the pads. Shami continued to trouble Elgar, beating and squaring him up on multiple occasions as Jasprit Bumrah kept the pressure up from the other end. Keegan Petersen collected two fours off Shami to get going. During the 18-over spell, Elgar and Petersen were beaten on multiple occasions but did well to survive. Bumrah almost had the wicket of Petersen if Rishabh Pant had caught a tough catch with his right glove. Elgar was beaten four times in an over by Mohammed Siraj. But an over before stumps, Siraj walked off midway from his over, clutching the right hamstring. Earlier, stand-in skipper KL Rahul made a fighting fifty while Ravichandran Ashwin missed his half-century by four runs in a batting display where the middle-order, minus an injured Virat Kohli, failed to get going. Just like Centurion, India had won the toss and elected to bat first. But the similarities ended there as India got starts but couldn't stitch a big partnership. The start of India's innings was clearly split into two halves: 36/0 in the first hour and 17/3 in the second hour. Mayank Agarwal was more aggressive of the opening duo, driving Duanne Olivier for fours through cover and down the ground before giving the same treatment to Rabada. A cautious Rahul survived a caught-behind appeal as a short ball from Olivier brushed his shoulder. South Africa took the review, thinking of the sound as outer edge, and burned it. Rahul replied with back-to-back fours -- an on-drive and an outer edge through third man and gully. After drinks break, Agarwal fell while trying to drive a full ball from Marco Jansen and edged behind to keeper Kyle Verreynne. Cheteshwar Pujara was troubled by Ngidi, Rabada, and Olivier consistently bowling incoming deliveries, which kept short leg interested thrice. Ngidi bowled two maidens in his four-over spell, keeping the pressure on India. Rahul continued to find a boundary each off Olivier and Rabada. But saw his partners go down in quick succession in the 24th over as Olivier sent back Pujara and Rahane on back-to-back deliveries. Pujara's forward defence resulted in extra bounce taking the shoulder edge of the bat to Temba Bavuma at gully. Next ball, Rahane steered a back of length delivery straight to Keegan Petersen at third slip. Hanuma Vihari was given a life at nine when Bavuma dropped a straightforward catch at point off Ngidi. Rahul and Vihari crunched five boundaries in the next six overs, with the stand-in captain's drive through cover and latter's slap over point being the standouts. But the solid 42-run stand was brought to an end by Rabada, taking out Vihari at the stroke of drinks break. A short ball with extra bounce took an inner edge off Vihari's bat to short leg, where Rassie van der Dussen dived to his left and put out his left hand to take a stunning catch. Rahul continued to march forward with a leaning drive through cover off Olivier and pulling Rabada through fine leg. He then brought up his half-century in 128 balls. But in the next over, Rahul attempted to pull a short ball from Jansen but the top-edge was caught by Rabada diving in from fine leg. Ashwin and Pant build a stand of 40 runs for the sixth wicket, with the off-spinner being the more aggressive of the two. But Jansen ended the partnership, taking out Pant with a delivery angled towards off-stump and coming in to take the inner edge to Verreynne. In the next over, Olivier picked his third wicket as Shardul Thakur slapped away from the body straight to Petersen at gully. Ashwin continued to counter-attack, clipping Rabada through mid-wicket with the full face of the bat, and leaned forward to drive Olivier through mid-on. Shami cut Rabada solidly but drove straight back to the bowler, who completed a superb caught and bowled dismissal. Ashwin survived a chance at 44 when Bavuma almost pulled off a screamer at deep cover. But on the very next ball, Ashwin backed away to upper-cut a short ball from Jansen and miscued it completely to Petersen at point. Bumrah brought out the long handle to smash Rabada for 14 runs, including two fours and a six to take India past 200. Rabada then wrapped the Indian innings by strangling Siraj down leg. India will be aware they need to bounce back with the ball on day two to topple South Africa from pole position in the match. Brief scores: India 202 all out in 63.1 overs (KL Rahul 50, Ravichandran Ashwin 46; Marco Jansen 4/31, Kagiso Rabada 3/64) against South Africa 35/1 in 18 overs (Keegan Petersen 14 not out, Dean Elgar 11 not out; Mohammed Shami 1/15), South Africa trail by 167 runs /IANS

There were people willing you to fail when I took charge; I made myself thick-skinned: Shastri
Mumbai, April 26 : Former Indian men's cricket team chief coach Ravi Shastri has said that when he took over the job of guiding the national side, he

There were people willing you to fail when I took charge; I made myself thick-skinned: Shastri

Mumbai, April 26 : Former Indian men's cricket team chief coach Ravi Shastri has said that when he took over the job of guiding the national side, he knew he had to have a "thick skin, thicker than th […]

New Delhi, April 26 : Former India women's hockey captain Elvera Britto, the eldest of the three famous Britto sisters who ruled the roost for nearly a decade in the 60s, passed away in Bengaluru in t […]

Mumbai, April 26 : Punjab Kings seem to have learnt a lesson from their defeat in the previous game against Delhi Capitals on April 20, where their ultra-aggressive approach let them down big time. […]

Rio de Janeiro, April 26 : Football legend Pele has expressed a desire to see Brazil win the FIFA World Cup for the sixth time in Qatar later this year. The most successful outfit in the competi […]