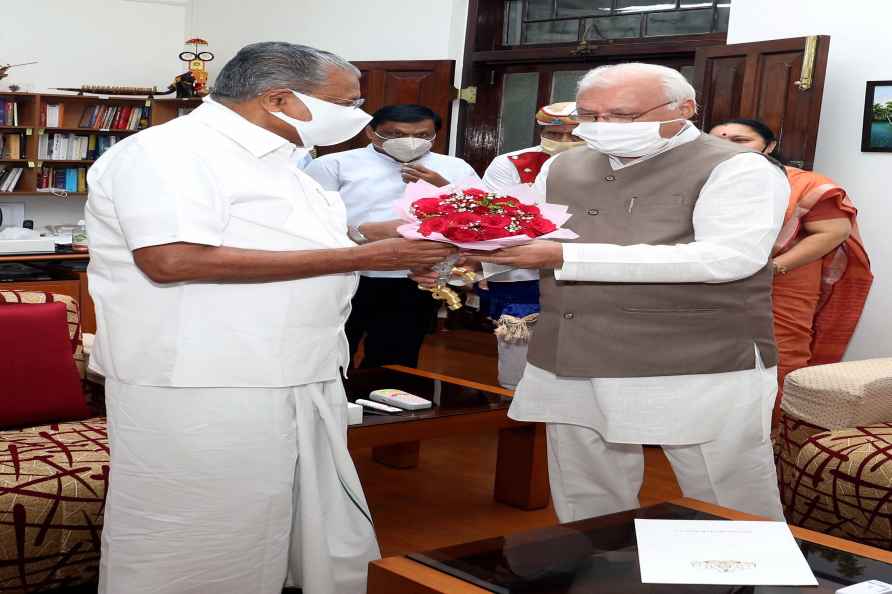 Thiruvananthapuram, Jan 3 : Though Kerala Chief Minister Pinarayi Vijayan is one who is known for his tough stand, he also keeps promises. Vijayan kept his word to K.C. Rosakutty, a former Congress legislator, who resigned just before the assembly elections last year and joined the CPI-M. Roaskutty has now been appointed chairperson of the Kerala State Women's Development Corporation and she will assume office on Friday. During the 2011-16 term of Oommen Chandy led Kerala government, Rosakutty was the chairperson of the Kerala State Women's Commission. Rosakutty is the third turncoat who has been given posts for dumping the Congress party, after she was denied a seat to contest from Wayanad district. Popular Congress leader Lathika Subash created flutter just before the April 6 assembly polls, when she tonsured her head in front of the State Congress headquarters, after she was denied a seat to contest the polls. Subash soon made the Nationalist Congress Party her new 'home' and for her decision, Vijayan has made her the chairperson of the Kerala Forest Development Corporation. Similarly for former Congress general secretary (Organisation) K.P. Anil Kumar who quit his party in September was given the plum post of the chairman of Overseas Development and Employment Promotion Corporation. A media critic on condition of anonymity said this is the good thing of Vijayan that if he accepts, then the accepted person will get sops. "Unlike the Congress party, where keeping promises is appallingly poor, the Vijayan led CPI-M led Left is not like that. This is also a strategy of the CPI-M to accommodate those who jump the fence and after a few years, then they will have to prove their mettle. So far Vijayan has kept his word and this is a 'marketing' strategy being employed that those who come will not be treated as second class citizens," said the critic who did not wish to be identified. However if the CPI-M got three prized catches, the Congress also got an even bigger catch, when it got back one of its tallest leader and closest aide of A.K. Antony -- Cheriyan Phillip, who at his prime left the Congress party in 2001 to join as a fellow traveller of the CPI-M. However last year, Phillip after being miffed of not being selected for Rajya Sabha, left the CPI-M and returned to the Congress party and he has now started his own YouTube Channel, that was launched last Saturday, where he will be exposing the Left. /IANS

Parliamentary panel to consider 'Mediation Bill 2021'
New Delhi, May 19 : The Parliamentary Standing Committee on Personnel, Public Grievances, Law and Justice is slated to hold a meeting for consideratio

Bikru wants Panchayat Bhawan back from Vikas Dubey's hold
Kanpur, May 19 : The head of Bikru village that witnessed the massacre of eight police personnel in July 2020, has written to the UP government demand

AAP gears up for upcoming civic body polls in Punjab

DW BUREAU / Chandigarh The Aam Aadmi Party (AAP) is gearing up for the civic body pools in Punjab, that are to be held later this year. On Thursday, AAP Punjab affairs in-charge Jarnail Singh held […]

Chennai, May 19 : The Greater Chennai Police has launched a hunt for four killers of a city-based financier. Arumugham, 36, who was a small-time financier in Chennai was riding pillion with his […]

New Delhi, May 19 : The Parliamentary Standing Committee on Personnel, Public Grievances, Law and Justice is slated to hold a meeting for consideration of 'The Mediation Bill, 2021' on Thursday. […]