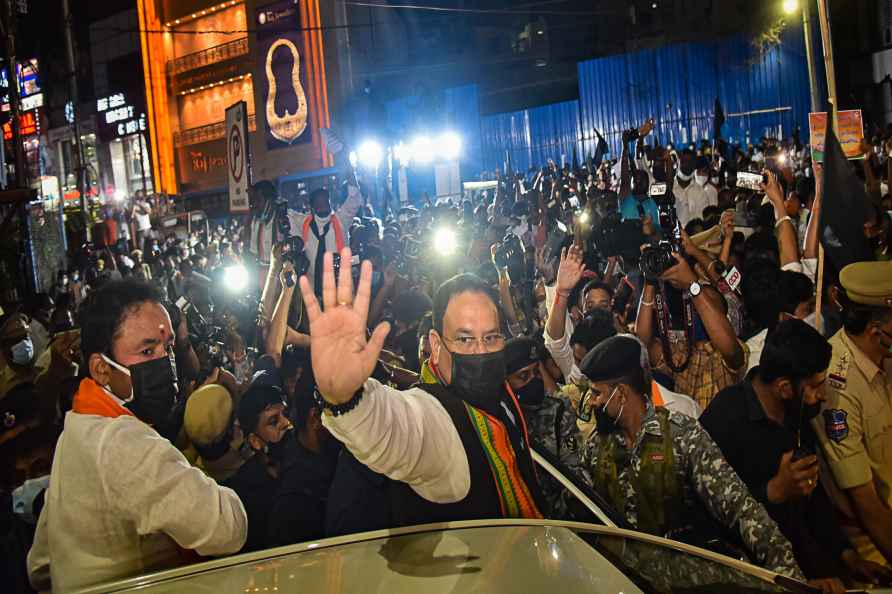 [Secunderabad: BJP National President JP Nadda with Union Minister Gangapuram Kishan Reddy, during a protest march against the arrest of Telangana BJP President Bandi Sanjay Kumar, in Secunderabad, Tuesday, Jan. 4, 2022. ( /PTI] Hyderabad, Jan 4 : Hyderabad police on Tuesday denied permission to a rally by BJP national president J.P. Nadda to protest against the arrest of party's Telangana unit president and MP Bandi Sanjay Kumar. The saffron party had planned to organise the candle light rally from Mahatma Gandhi Statue, Ranigunj to Paradise X Roads in Secunderabad on Tuesday evening. The rally was to be led by Nadda and several BJP leaders including union minister for tourism and culture G. Kishan Reddy were to participate in this. However, citing the orders banning public meetings and rallies in view of Covid-19 situation, the city police refused to give permission. Sanjay was arrested in Karimnagar town on Sunday night when he was staging a night-long protest demanding the government to amend orders relating to transfers of government employees and teachers. The Karimnagar MP was booked for violating Disaster Management Act and for attacking police personnel. A magistrate on Monday sent him and four others to judicial custody for 14 days. The BJP has called for a state-wide protest for 14 days against the arrest and alleged that Telangana Rashtra Samithi (TRS) is using undemocratic means to suppress the peaceful protests. Condemning the arrests, Nadda said that the BJP will take all democratic recourse to fight against the autocratic measures of the TRS government. Meanwhile, union minister Kishan Reddy visited Karimnagar jail and called on Bandi Sanjay. He later visited Sanjay's office and alleged that the police attacked the MP and his supporters when they were holding a peaceful protest in the premises. Talking to reporters, Kishan Reddy wondered if Covid rules apply only to BJP. He asked why the rallies and meetings of ministers and TRS leaders were allowed. He alleged that the state government was implicating BJP leaders in false cases but made it clear that they will not be afraid of such tactics. /IANS

10 terrorists killed in Kashmir in 3 days
[Srinagar: Locals inspect an under construction house where two Lashkar-e-Taiba (LeT) were hiding and later killed during an encounter, at Soura in Sr

Patna: RJD supporters with their bodies painted, ride a buffalo during Rajya Sabha nomination, in Patna, Friday, May. 27, 2022. ( /PTI […]