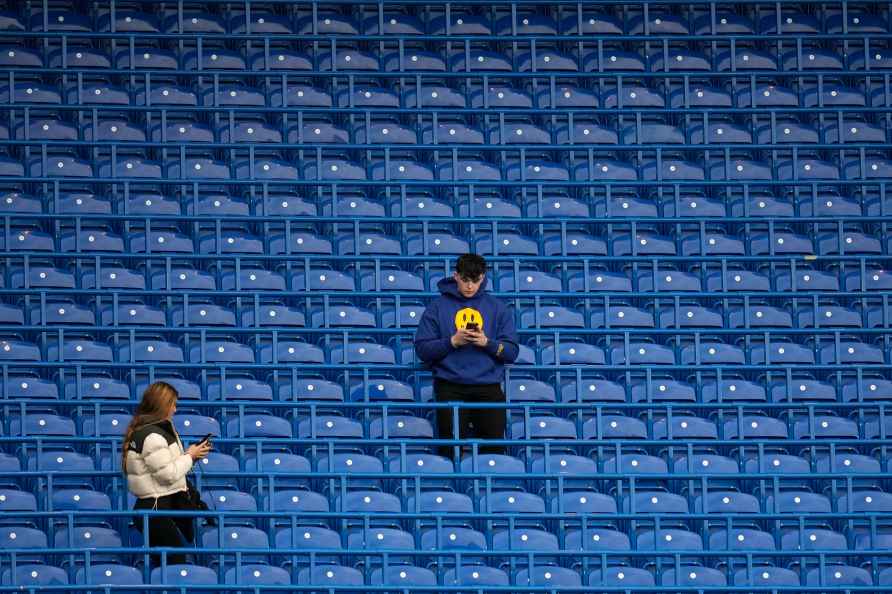 [London: Spectators take their places in the stands ahead of the English Premier League soccer match between Chelsea and Liverpool at Stamford Bridge in London, Sunday, Jan. 2, 2022. /PTI] London, Jan 2 : Standing at top flight football games in England returns on Sunday after more than 30 years when Chelsea welcome Liverpool at London's Stamford Bridge stadium. All stadiums in the two top flights in English football, the Premier and Championship leagues, became all-seater following the 1989 disaster when 97 Liverpool fans were killed in a crush at Sheffield's Hillsborough stadium. The return of standing on the terraces was welcomed Saturday by the chief of the organisation representing football fans. "This is a huge step forward. This is something we've been campaigning for 30 years on," said Kevin Miles, CEO of the Football Supporters Association. "It's great to see people now being offered the choice on whether to sit or stand at a football match. I will feel more secure having that safety rail in front of me there. I think that will make a difference to the confidence of fans in the stands about their own safety." Standing is to be allowed at five stadiums as part of a government pilot scheme to determine whether standing should be brought back at all grounds, reports Xinhua. As well as Chelsea, Cardiff City, Manchester City, Manchester United and Tottenham Hotspur, will be the first in the top two tiers of football to have licensed 'safe standing' in designated seated areas for home and away fans. "Fans have long campaigned for the introduction of safe standing, so I'm pleased that Stamford Bridge will launch this pilot program that will allow us to carry out an in-depth trial at some of our biggest stadia over the remainder of the season, and inform a decision on a widespread roll-out. Safety will be absolutely paramount at all times," said Sports Minister Nigel Huddleston on Saturday. Detailed work is being carried out to monitor the early adopters of standing, with the Sports Grounds Safety Authority (SGSA) working with football clubs, supporters groups, local authorities and the police. SGSA spokesman Ken Scott said that the early adopters programme would enable them to properly test and evaluate licensed standing areas and advise the government in its next steps. Chelsea and Liverpool entered the new year in second and third places respectively, with Manchester City topping the Premier League table. /IANS

Russia to stop gas supply to Finland after electricity cut
[FILE - A metallurgical plant is seen on the outskirts of the city of Mariupol, Ukraine, Thursday, Feb. 24, 2022. Russia began evacuating its embassy

After US, Canada bans China's Huawei, ZTE from 5G networks

Toronto, May 20 : After the US, Canada has now moved to ban Chinese telecommunication giants Huawei and ZTE from its 5G networks in order to ensure the "long term safety of our telecommunications infr […]