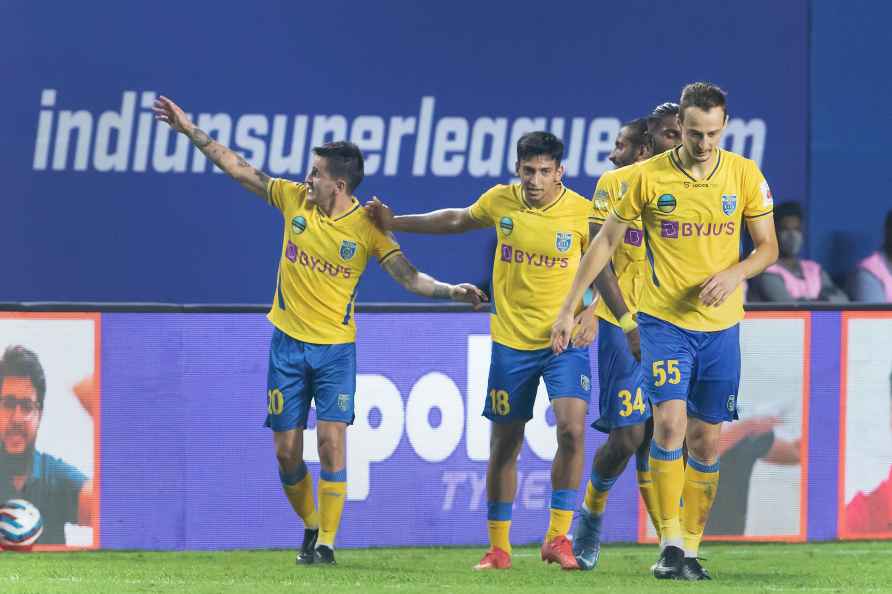 [Goa: Kerala Blasters FC players celebrate after scoring a goal during match 46 of season 8 of Indian Super League football tournament between Kerala Blasters FC and FC Goa, at the Tilak Maidan Stadium, in Goa, Sunday, Jan. 2, 2022. (ISL/ /PTI] Vasco da Gama (Goa), Jan 2 : Odisha FC will face a stern test against Mumbai City FC when the two sides meet in their Indian Super League (ISL) match at the Tilak Maidan Stadium, here on Monday. Odisha suffered a heavy defeat to Hyderabad FC in their last outing, underlining their drop in form since the first few games where they looked very good. The Kiko Ramirez-coached side have been poor defensively, conceding 20 goals in 8 games this season, the worst record so far. In 2020-21 ISL, Odisha ended with the worst defensive record conceding 44 goals in 20 games with just one clean sheet. "There are some moments where we made individual mistakes and that cost us the game. But we cannot blame anyone. The coaching staff will take the responsibility first and then the players. We will keep trying to find a solution and we are confident of getting better," Assistant Coach Kino Garcia said in the pre-match press conference. "Mumbai are league leaders and they are a strong team. We have done our homework and we will be ready," he added. Kiko Ramirez remains suspended for the game for accumulating his second caution from the bench last match. For defending champions Mumbai, it will be about consolidating their lead at the of the heap after dropping points in the last two matches. The Islanders lost to Kerala Blasters FC and drew with NorthEast United FC in a high-scoring encounter, allowing teams like Hyderabad FC and ATK Mohun Bagan to close the gap on them. Mumbai have been a first-half team so far. Sixty percent of the goals scored by them have come in the first period. No team has scored more goals than Mumbai City (12) in the first half of games this season. But what will concern coach Des Buckingham is their struggles in the second half. Mumbai have conceded nine of their 13 goals in the second half of games. Seven of the nine goals conceded in the second half of games has come in 15 minutes between the 45th and 60th minute. No team has conceded more goals in these 15 minutes. "We need to make sure defensively we are well placed as well. That's what we have been training on in the last few games. We want to continue playing attacking football but we need to be good defensively as well," Buckingham said. /IANS

Alia jets off for her Hollywood debut, feels 'like a newcomer all over again'

Mumbai, May 20 : Bollywood actress Alia Bhatt, who got married to Ranbir Kapoor last month in an intimate ceremony, has jetted off to an undisclosed location for the shoot of her Hollywood debut proje […]

India could have averted power crisis with renewable goal on track: Report

New Delhi, May 20 : India could have averted the power crisis in April if progress towards the 175 GW renewable energy goal had been on track, a new analysis by think tank Climate Risk Horizons said o […]

China proposes search for nearby habitable planets via space telescope

Beijing, May 20 : Chinese scientists have proposed a space project to survey the sky through a space-borne telescope to hunt for habitable Earth-like planets outside our solar system, about 32 light-y […]