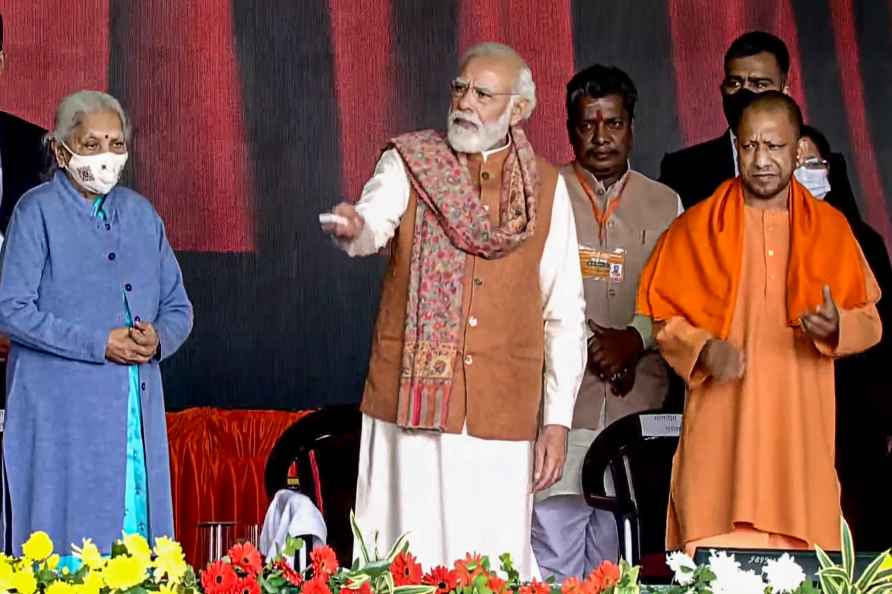 [**EDS: VIDEO GRAB** Meerut: Prime Minister Narendra Modi lays the foundation stone of Major Dhyan Chand Sports University in Meerut, Sunday, Jan. 2, 2022. UP Governor Anandiben Patel and UP CM Yogi Adityanath is also seen. ( /PTI] Meerut, Jan 2 : Prime Minister Narendra Modi will be in Meerut on Sunday to lay the foundation for the Major Dhyan Chand Sports University. According to an official release, the university will be established at an estimated cost of Rs 700 crore at the Salawa and Kaili villages of the Sardhana town. Massive security arrangements have been put in place by Central and state agencies, including SPG, anti-bomb disposal squads, NDRF teams and five companies of the PAC. More than a thousand Uttar Pradesh Police personnel are also being deployed at the venue. According to official sources, the Prime Minister will stay for 90 minutes at the venue and will interact with 32 athletes out of thousands who will be present for the inauguration. The sports university is named after Hockey legend Major Dhyan Chand who helped India score three Olympic gold medals in 1928, 1932, and 1936. In 1956, he was awarded the Padma Bhushan. His birthday that falls on August 29 is celebrated as National Sports Day. The new sports stadium will be equipped with state-of-the-art sports infrastructure including synthetic hockey ground, football ground, separate grounds for basketball, volleyball, handball, and kabaddi. This is besides a lawn tennis court, gymnasium hall, a synthetic running stadium, swimming pool, a multipurpose hall and a cycling velodrome. /IANS

Woman lost during 1947 violence meets Sikh brothers after 75 yrs at Kartarpur
[**EDS: TO GO WITH STORY FGN48** Kartarpur: Mumtaz Bibi meets her brothers after getting separated from her family during Partition in 1947, at Kartar

Kolkata, May 19 : In an unprecedented directive issued at around 11.45 p.m. on Wednesday, a single judge bench of the Calcutta High Court directed the CRPF to take charge of the security of the West B […]

By Arul Louis United Nations, May 19 : With economic growth forecast at 6.4 per cent for this fiscal year, India will be the fastest-growing major economy, according to the UN. "We expect Ind […]