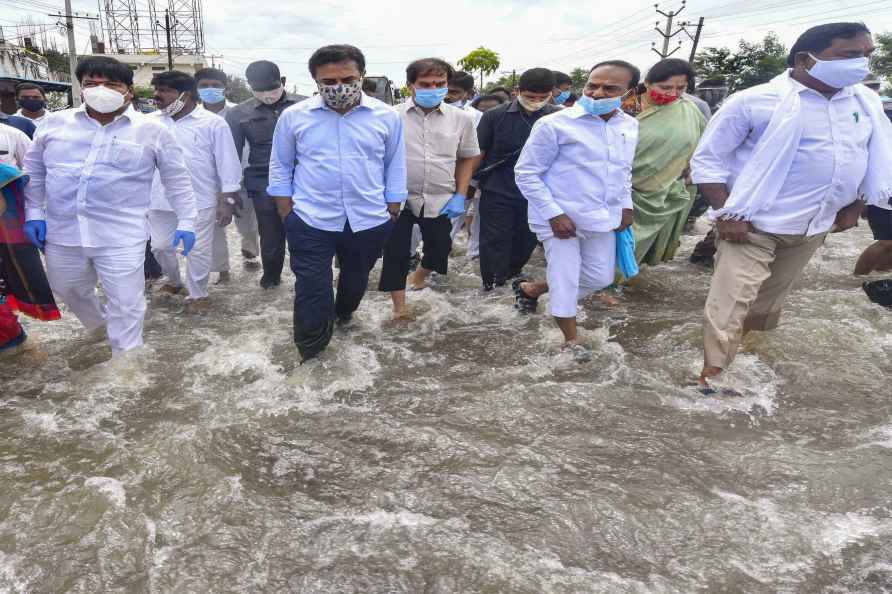 Hyderabad, Jan 1 : Telangana's minister for municipal administration and urban development K.T. Rama Rao on Saturday urged the Centre to transfer defence land for construction of two skyways and ministry of home affairs land for building a flyover in Hyderabad. The minister said it was unfortunate that the Centre had not responded to repeated requests of the state government to transfer defence lands to facilitate construction of skyways from Patny to Kompally and from Jubilee Bus Station to Turkapally. "During the last six years we made several requests. Four defence ministers have changed and we requested all of them," said the minister at the inauguration of Sheikhpet-Raidurgam flyover in the city. KTR said while the defence lands were given for construction of roads in Lucknow and other cities, the Centre was not responding to the request of the Telangana government. He urged the union minister for culture and tourism G. Kishan Reddy, who was present at the flyover inauguration, to take up the issue of defence lands with Defence Minister Rajnath Singh. KTR also referred to the problems faced by people in Secunderabad Cantonment area due to closure of 21 roads in violation of local military authority rules and urged Kishan Reddy to take up the issue with the Defence Minister and ensure that all the roads are reopened for the public. The state minister also requested the central minister to help in transfer of a piece of land of ministry of home affairs at Rasoolpura Junction for building a flyover to ease the traffic congestion. Stating that Hyderabad has a rich history and cultural heritage, KTR also urged the central minister to make every effort to get UNESCO world heritage city status for Hyderabad. He offered all the help from the state government in this regard. Kishan Reddy, in his speech, said the Centre was ready to provide funds to develop Science City in Hyderabad and suggested the state government submit a proposal in this regard. The central minister also asked the state government to initiate land acquisition for Regional Ring Road (RRR) around Hyderabad. Stating that the Centre has already approved the project, he said the work can begin as soon as the land is acquired. Kishan Reddy said the project would be a game changer for the development of Hyderabad and its surroundings. The six-lane two way flyover from Sheikhpet to Raidurgam has been built under the Strategic Road Development Program (SRDP) at a cost of Rs 333 crore. This 2.7 km long flyover is the second longest flyover in the city and will help in free flow of traffic from Rethibowli towards Gachibolwli bypassing four crossings. KTR said the state government was focusing on development of Hyderabad as it was playing a key role in Telangana's contribution to the national growth. He cited the report of the Reserve Bank of India (RBI) that in a short span of time Telangana has become the fourth largest contributor to the country's economic growth. He said under SRDP which is the brainchild of Chief Minister K. Chandrasekhar Rao and aimed at easing traffic congestion, 24 projects have been completed at a cost of Rs 6,000 crore. The government has also formed Hyderabad Road Development Corporation Limited (HRDCL) to develop 132 link roads while under Comprehensive Road Maintenance Program (CRMP), roads to a length of 709 km were being maintained. /IANS

Muslim leaders take a step forward to ease unrest situation in K'taka
Bengaluru, May 17 : In a bid to calm the simmering unrest in Karnataka, Muslim community and religious leaders are urging people to postpone the use o

No protests will be allowed in Delhi CM's residence area: Delhi Police to HC
New Delhi, May 17 : The Delhi Police on Tuesday apprised the Delhi High Court that it has restricted protests at the Civil Lines Metro station, the ar

Bengaluru, May 17 : In a bid to calm the simmering unrest in Karnataka, Muslim community and religious leaders are urging people to postpone the use of loudspeakers while calling Azaan on mosques from […]

No protests will be allowed in Delhi CM's residence area: Delhi Police to HC

New Delhi, May 17 : The Delhi Police on Tuesday apprised the Delhi High Court that it has restricted protests at the Civil Lines Metro station, the area where Delhi Chief Minister Arvind Kejriwal's re […]

TN MPs to meet FM and Textile Minister on Wednesday