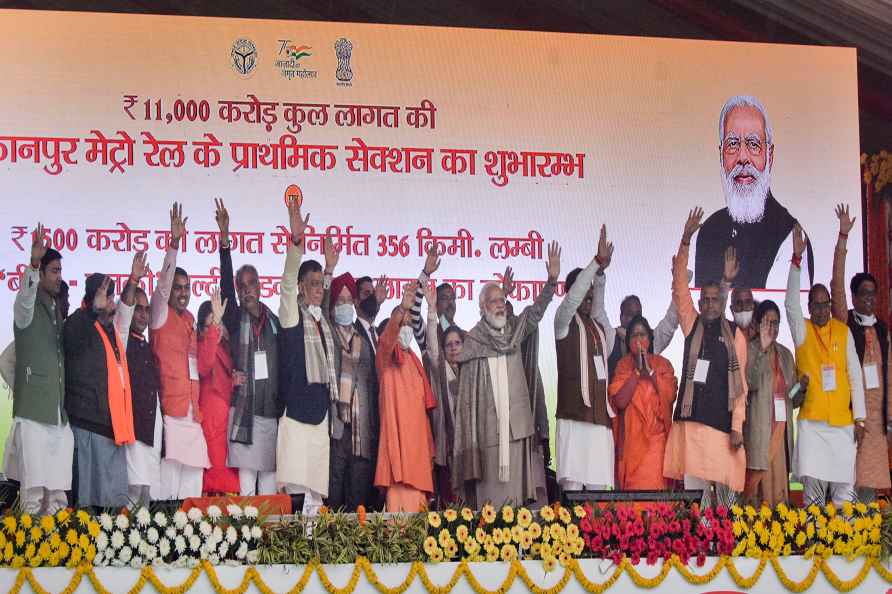 [Kanpur: Prime Minister Narendra Modi along with Union Minister Hardeep Singh Puri, Uttar Pradesh Chief Minister Yogi Adityanath, Uttar Pradesh Deputy Chief Minister Keshav Prasad Maurya and other dignitaries, waves towards supporters during a programme to launch a section of Kanpur metro line, in Kanpur, Tuesday, December 28, 2021. ( /PTI] Kanpur, Dec 28 : Prime Minister Narendra Modi will on Tuesday inaugurate the completed section of Kanpur metro rail and Bina-Panki multi-product pipeline project, and also attend the 54th convocation ceremony of Indian Institute of Technology Kanpur (IIT-K). The Bina-Panki multi-product pipeline will be operated by Bharat Petroleum Corporation Limited (BPCL). The 356-km pipeline originates from Bina Refinery in Madhya Pradesh and terminates at Panki Depot in Kanpur. Established at the cost of Rs 1,524 crore, it will cater to the demand of petroleum products from northern states and has a capacity of 3.5 million metric tonne per annum. The pipeline is equipped with the state-of-the-art supervisory control and data acquisition (SCADA) system, ensuring supply of petrol and diesel to Kanpur, Lucknow, Aonla, Shahjahanpur, Baitalpur and Gonda. Meanwhile, the completed 9 km-long section of the metro rail project is from IIT-Kanpur to Moti Jheel. Modi will also inspect the project and undertake a metro ride from the IIT metro station to Geeta Nagar. The entire length of the project in Kanpur is 32 km and is being built at a cost of over Rs 11,000 crore. The Prime Minister will also attend the 54th convocation of IIT Kanpur as the chief guest while Uttar Pradesh governor Anandiben Patel and Chief Minister Yogi Adityanath will be the guests of honour. IIT-K will be hosting physical convocation after a year as it was held virtually last year. The institute has created a bio bubble to ensure safety amid the Covid-19 pandemic. IIT-K spokesperson Girish Pant said: "Bio-bubble is a concept developed recently in the field of sports, especially in cricket, where a bio-secure environment is created to minimise contamination risks from the novel coronavirus. "Although the concept has now spread to many sectors, it is probably the first time that a higher educational institute has adopted such measures for its convocation. "The institute had conducted RT-PCR tests of all the attendees on Monday and a subsequent rapid antigen test will also follow on the convocation day prior to opening of the gate to the venue of the event." On the occasion, a total of 1,723 students will be receiving their degrees and 80 prizes and medals will also be given. Twenty-one students will also be awarded the "Outstanding PhD Thesis Award" in the second session of the convocation. During the convocation, all the students will be issued digital degrees through an in-house blockchain-driven technology developed at the institute under the National Blockchain Project. The Prime Minister will launch the blockchain-based digital degrees. These digital degrees can be verified globally and are unforgeable. Moreover, three honorary doctorate degrees will also be given to three eminent personalities namely Prof Rohini M Godbole, Senapathy 'Kris' Gopalakrishnan, and Pandit Ajoy Chakrabarty. /IANS