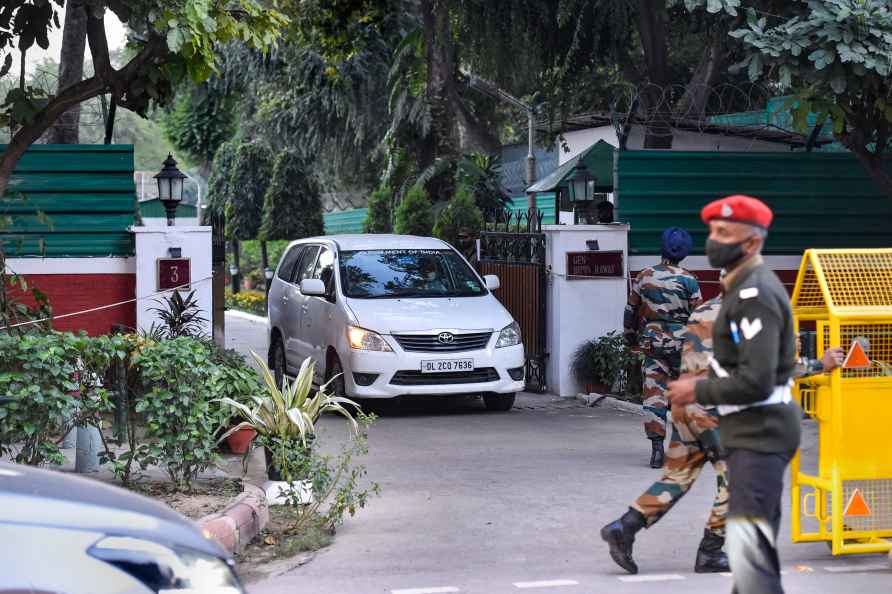 [New Delhi: Security personnel outside the residence of Chief of Defence Staff (CDS) Gen Bipin Rawat, in New Delhi, Wednesday, Dec. 8, 2021. CDS Gen Bipin Rawat accompanied by his wife Madhulika Rawat, his staff and other officials were on board IAF Mi-17V5 helicopter when it crashed in Coonoor, Tamil Nadu. ( /PTI] New Delhi, Dec 8 : India's first Chief of Defence Staff, Gen Bipin Rawat, his wife, and 11 others were killed when their IAF Mi-17 helicopter crashed near Coonoor in Tamil Nadu's Nilgiris district on Wednesday, the IAF announced. "With deep regret, it has now been ascertained that Gen Bipin Rawat, Mrs Madhulika Rawat and 11 other persons on board have died in the unfortunate accident," the Indian Air Force said in a tweet. Defence Minister Rajnath Singh, in a series of tweets, said: "Deeply anguished by the sudden demise of Chief of Defence Staff Gen Bipin Rawat, his wife and 11 other Armed Forces personnel in an extremely unfortunate helicopter accident today in Tamil Nadu. "His untimely death is an irreparable loss to our Armed Forces and the country". "General Rawat had served the country with exceptional courage and diligence. As the first Chief of Defence Staff he had prepared plans for jointness of our Armed Forces," he said. The CDS was going to the Defence Services Staff College, Wellington, to give a lecture. The chopper, with a total of 14 persons on board, took off from the Sulur air base near Coimbatore and was on its way to Coonoor. When the chopper was a few minutes away from landing, it, as per eyewitnesses, hit a tree, crashed, and caught fire, resulting in several casualties. /IANS