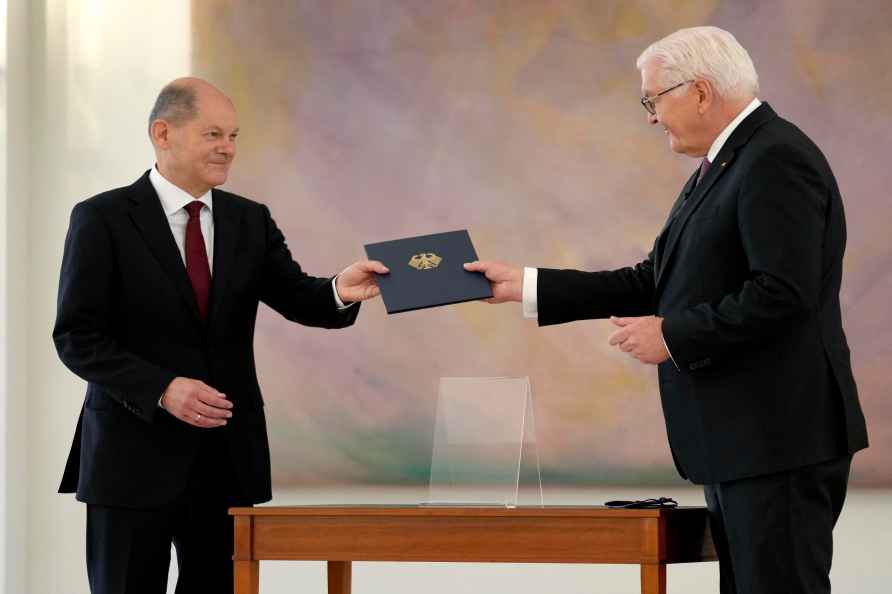 [Berlin: New elected German Chancellor Olaf Scholz, left, receives his letter of appointment by German President Frank-Walter Steinmeier, right, during a reception at Bellevue Palace in Berlin, Germany, Wednesday, Dec. 8, 2021. Scholz has become Germany's ninth post-World War II chancellor, opening a new era for the European Union.......s most populous nation and largest economy after Angela Merkel.......s 16-year tenure. Scholz.......s government takes office with high hopes of modernizing. /PTI] Berlin, Dec 8 : Germany has got a new leader after a decade and a half with SDP leader Olaf Scholz on Wednesday getting confirmed as the new Chancellor, bringing to an end to the Angela Merkel era. Scholz, 63, who will helm the three-party "traffic light" coalition - so named due to the colours of the constituent parties - SPD (red), Free Democrats (yellow), and the Greens - received 395 votes to 303 in the Bundestag and was subsequently given a standing ovation, the BBC reported. He was then formally appointed as the ninth Federal Chancellor by President Frank-Walter Steinmeier. The elevation of Scholz, who was Vice Chancellor in the Merkel dispensation, brings curtains down on Merkel's 31-year political career. His 16-strong cabinet is likely to include as many women as men. /IANS

Bangladesh fielding error vs New Zealand goes viral; leaves cricket fans in splits
[Christchurch: Tom Latham of New Zealand is 150 not out during play on day one of the second cricket test between Bangladesh and New Zealand at Hagley

Over 40 killed, many displaced as heavy rains, snowfall hit Pakistan
[Islamabad: Ambulances carry the dead bodies of victims after a heavy snowfall-hit area in Murree, some 28 miles (45 kilometers) north of the capital

Rain with thunderstorm to continue in parts of MP: IMD

New York, Jan 8 : Lateral flow tests may be less effective at detecting Omicron even when people are at their most infectious, a US real-world study has found. According to the Daily Mail, resea […]