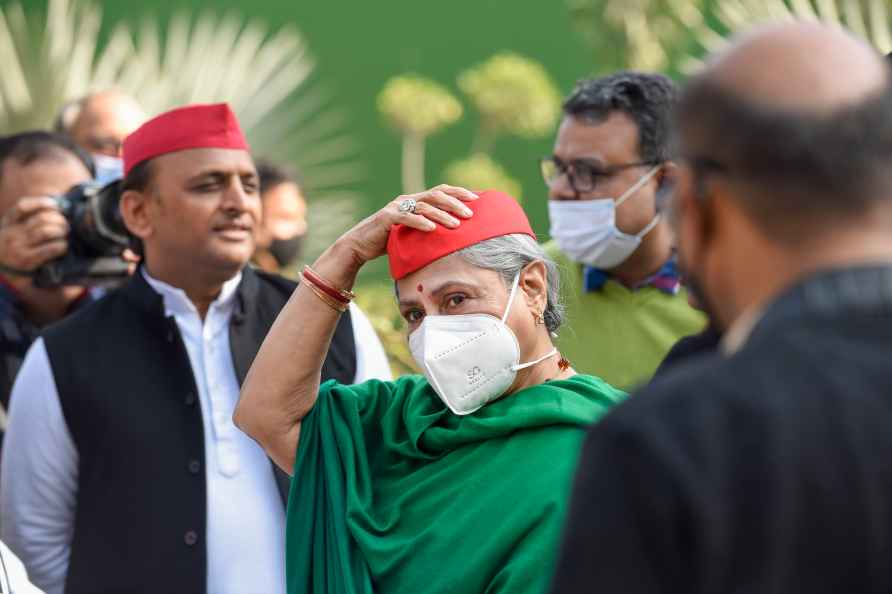 [New Delhi: Samajwadi Party MP Jaya Bachchan adjusts her party cap as she arrives to support the suspended Rajya Sabha MPs, who have been staging a protest near Mahatma Gandhi's statue demanding revocation of their suspension, during the Winter Session of Parliament, in New Delhi, Wednesday, Dec. 8, 2021. ( /PTI] New Delhi, Dec 8 : Congress president Sonia Gandhi on Wednesday accused the Centre of being "insensitive" towards the farmers, adding that the farm laws were repealed in an "undemocratic" manner. While addressing the Congress Parliamentary party meeting, she paid homage to the 700 farmers who lost their lives during their protest against the farm laws. Rahul Gandhi was also present at the meeting. Extending unconditional support to farmers demand of legally guaranteed MSP, she called upon the party members to honour the farmers who died during the protest. Notably, the Congress has been demanding appropriate compensation to the families of victim farmers. Party MP Rahul Gandhi recently placed a list of the dead farmer protesters in the Lok Sabha. The Opposition has been demanding a detailed discussion on the border situation in Parliament but the Centre is avoiding it, Sonia Gandhi alleged. Terming suspension of 12 Rajya Sabha MPs "unprecedented and unacceptable", the veteran leader said the party stands in solidarity with them. Demanding revocation of the suspension order, Sonia said the Centre will have to reinstate them. The Modi government is also being accused of selling the country's assets to recover its economic losses. On Tuesday, while interacting with the media, Leader of Opposition in Rajya Sabha Mallikarjun Kharge said that MPs were suspended for the entire Winter session for an act which took place in the Monsoon session. If the Centre does not revoke the suspension, the Opposition will resort to a hunger strike. /IANS