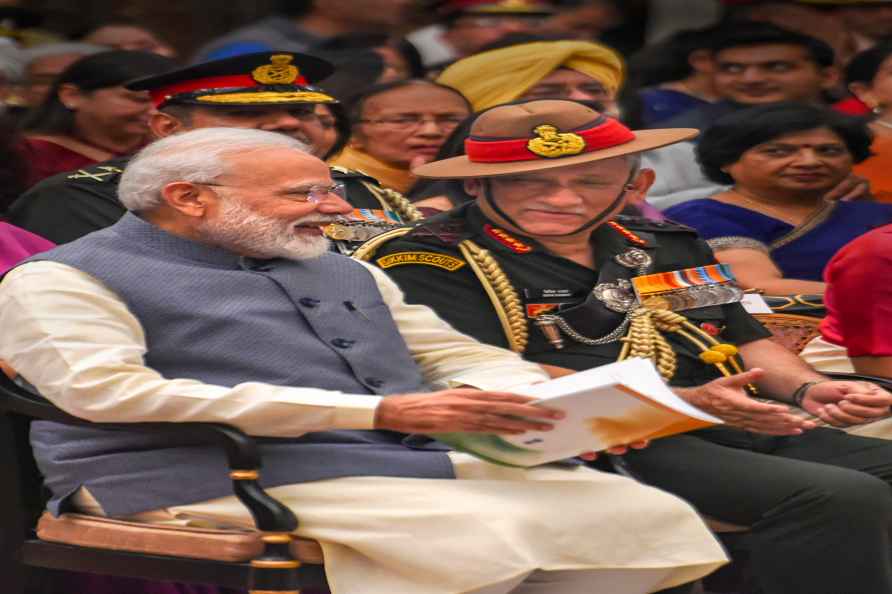 [**EDS: FILE IMAGE** New Delhi: File image dated, Tuesday, March 19, 2019, of Prime Minister Narendra Modi and Chief of Army Staff Bipin Rawat at the Defence Investiture Ceremony- II, at Rashtrapati Bhawan in New Delhi. An Indian Air Force helicopter with Chief of Defence Staff General Bipin Rawat on board crashed in Tamil Nadu's Coonoor on Wednesday, Dec. 8, 2021. ( /PTI] Chennai, Dec 8 : At least four senior military officials were feared dead in an Indian Air Force helicopter crash in Tamil Nadu's Coonoor on Wednesday afternoon in which Chief of Defence Staff General Bipin Rawat was travelling along with 13 others. Rawat and his wife Madhulika Rawat and others were in the chopper. He was going to the Defence Services Staff College in Wellington in Coonoor district to give a lecture scheduled at about 3 p.m. Confirming about General Rawat's presence, Indian Air Force tweeted, "An IAF Mi-17V5 helicopter, with CDS Gen Bipin Rawat on board, met with an accident today near Coonoor, Tamil Nadu." Two passengers were severely injured. Drones are being used to locate the survivors. The force said that an inquiry has been ordered to ascertain the cause of the accident. The chopper took off from the Sulur airbase and was proceeding to Wellington when it crashed. Others who were in the chopper were Brigadier L.S. Lidder, Lieutenant Colonel Harjinder Singh, Naik Gursewak Singh, Naik Jitender Kumar, Naik Vivek Kumar, Naik B. Sai Teja, Havaldar Satpal and pilots. The rescued suffered serious injuries and have been taken to the Military Hospital in Wellington cantonment. The hospital is surrounded by a strong contingent of police personnel. According to reports, four bodies were recovered from the accident site. A former Wing Commander of the Indian Air Force (IAF) told IANS that 'based on the visuals on the news channels, the helicopter must have crashed with a strong impact and exploded'. According to Tamil Nadu Health Secretary Dr J. Radhakrishnan a special medical team has been sent to Coonoor to provide treatment to the injured. TN Chief Minister may visit the injured in the hospital, sources said. /IANS