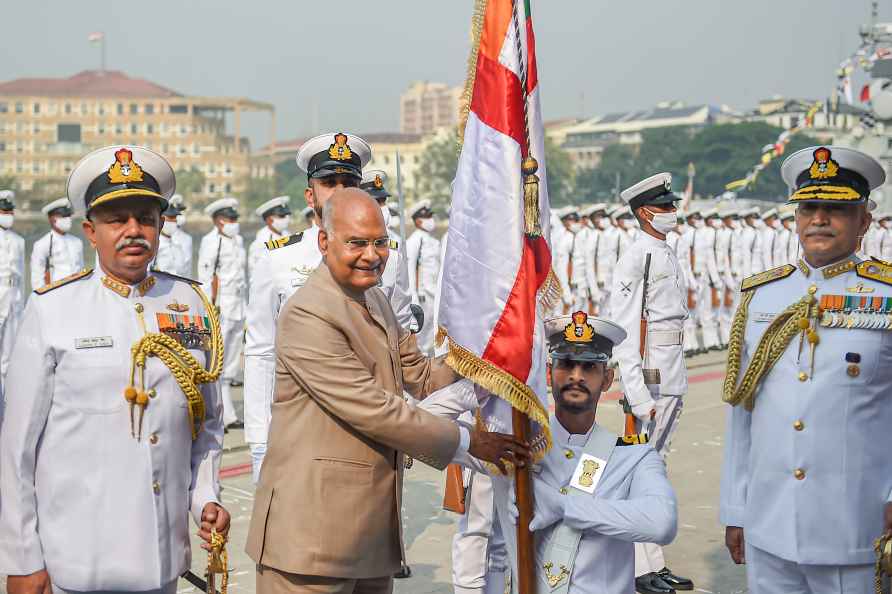 [Mumbai: President Ram Nath Kovind during the presentation of 'President Standard' to the 22nd Missile Vessel Squadron, also known as the Killer Squadron, at a ceremonial parade at Naval Dockyard in Mumbai, Wednesday, Dec. 8, 2021. ( /PTI] Mumbai, Dec 8 : Paying tributes to the Indian Navy, President Ram Nath Kovind on Wednesday said it is now looked upon by the country's maritime neighbours as "a preferred security partner in the Indian Ocean Region (IOR)". A large share of the global maritime trade transits through the IOR. Hence, maintaining peace and tranquillity in this region is of paramount importance, not only for India but for the entire global community, the President observed. "India is a maritime nation and our navy has a huge role to play in furtherance of our foreign policy and in protecting our national interests and commercial operations. It has been successfully safeguarding our extensive maritime interests with resolve and tenacity," said President Kovind. Moreover, the emerging geopolitical challenges in the Indo-Pacific Region present India with an opportunity to play a pivotal role, and one of the leading navies here, it has invested significant efforts in meeting all regional commitments and furthering relations with the partners in the Indo-Pacific Region, he added. The President was speaking while presenting the coveted "President's Standard to 22nd Missile Vessel Squadron", here, in the presence of Governor Bhagat Singh Koshyari and Chief of Naval Staff Admiral R. Hari Kumar. The President said that the timing of this honour could not have been more befitting as the nation is celebrating 'Swarnim Vijay Varsha", and served as a testimony to the exceptional services rendered to the nation by the past and present officers and sailors of this squadron in its five-decades long journey. The squadron's glorious history started in 1970 with the 8 OSAI class ships - known for their speed and firepower - from the USSR, and they played a crucial role in the Arabian Sea and Bay of Bengal during the 1971 War. At that time, Operation Trident and Operation Python saw the sinking of Pakistan naval ships on the western seaboard and the Indian Navy managed to strike a lethal blow to the enemy power. Similarly, on 8th December, 50 years ago, the killer Squadron ships set ablaze the Karachi harbour, crippling the enemy morale, enforced a blockade on Karachi and achieved total sea control, though these ships were acquired primarily for shore defence, but became the most potent offensive strike force. The much decorated and honoured Killer Squadron evolved over the years with the induction of the Veer and Prabal class of ships, the latter being built in India. "I look at this commitment of the Indian Navy as a tribute to Chhatrapati Shivaji Maharaj who is regarded by many historians as the founder of India's battle-ready naval force in the 17th century," said President Kovind. The Supreme Commander of the Armed Forces also noted how the Indian Navy has rendered assistance to people during humanitarian crises or natural calamities within the country and beyond, like the repatriation of Indians during the Covid-19 pandemic from different countries or the rescue operations during the week-long havoc wreaked by Cyclone Taukte in May 2021. /IANS

Australian Open: Nadal begins quest for 21st Grand Slam with easy opening-round win
[Belgrade: Fans with Serbian flag and journalist wait for arrival of Novak Djokovic in front of the VIP terminal at the Nikola Tesla airport in Belgr