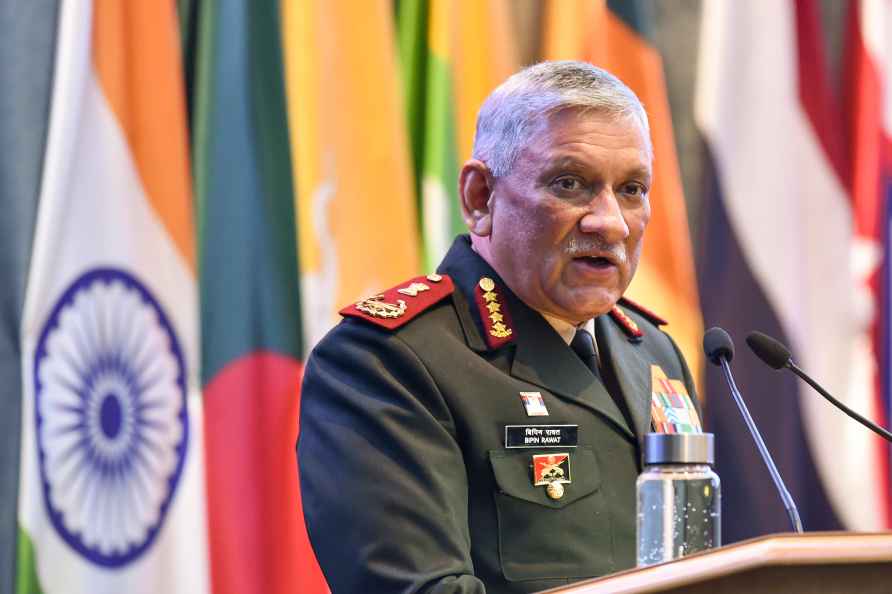 [*EDS: FILE PHOTO** New Delhi: In this Dec. 7, 2021 file photo, Chief of Defence Staff Gen Bipin Rawat addresses during the PANEX-21 exercise on disaster management, at DRDO Bhawan in New Delhi. An Indian Air Force helicopter with Chief of Defence Staff General Bipin Rawat on board crashed in Tamil Nadu's Coonoor on Wednesday, Dec. 8, 2021. ( /PTI] New Delhi, Dec 8 : A military chopper crashed in Tamil Nadu's Coonoor on Wednesday in which Indian's Chief of Defence Staff General Bipin Rawat was travelling along with 14 others. The number of casualties are still unknown and local police have ascertained only three rescued and searches are on for others. Emergency rescue teams have been rushed to the spot. Confirming about General Rawat's presence, Indian Air Force said, "An IAF Mi-17V5 helicopter, with CDS Gen Bipin Rawat on board, met with an accident today near Coonoor, Tamil Nadu." The force said that an inquiry has been ordered to ascertain the cause of the accident. The rescued suffered serious injuries and have been taken to Wellington cantonment. /IANS

New Delhi, Jan 6 : TickerPlant, a subsidiary of 63 moons technologies limited, today announced its collaboration with Google Cloud for the development of the CryptoWire eco-system, catering to all sta […]

New Delhi, Jan 6 : India's overall Omicron tally increased to 2,630 after 495 fresh cases were recorded in the last 24 hours, with Maharashtra and Delhi continuing to be the worst-hit, the Union Healt […]