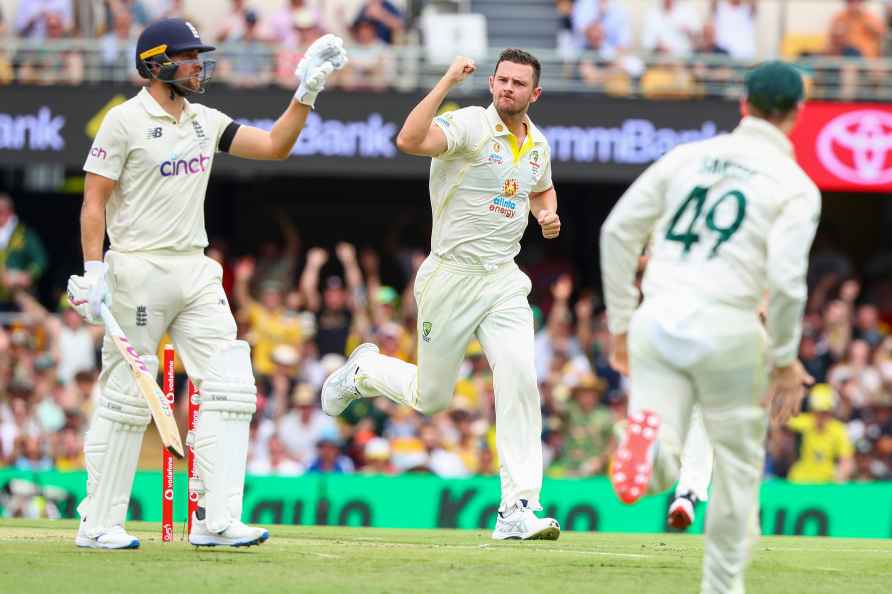 [Brisbane : Australia's Josh Hazlewood, center, celebrates after taking the wicket of England's Dawid Malan, left, during day one of the first Ashes cricket test at the Gabba in Brisbane, Australia, Wednesday, Dec. 8, 2021. /PTI] Brisbane, Dec 8 : Australia captain Pat Cummins made a cracking start to his captaincy stint with a five-wicket haul as the hosts skittled out England for just 147 on day one of the first Ashes Test at The Gabba here on Wednesday. At tea, Australia are the happier side of the two, with all pacers ending with wickets against their name. Resuming from 59/4 at lunch, Cummins struck in the very first over as Haseeb Hameed nicked to Steve Smith at second slip. Jos Buttler hit some exquisite boundaries to lead the attempt of a fightback with Ollie Pope, sharing a 52-run stand for the sixth wicket. But it didn't last long as Mitchell Starc cramped Buttler for room, forcing him to nick behind to keeper Alex Carey. Three overs later, Pope departed, top-edging to fine leg, giving Cameron Green his first Test wicket. From there, Cummins took over to take out England's tail quickly and wrap up an insipid batting effort from the tourists. Earlier, on a green pitch and overcast sky at The Gabba, Australia made inroads in the first session after England opted to bat first. Starc struck with the very first delivery, clean bowling Rory Burns around his legs. Josh Hazlewood caused more misery on England, drawing edges off the bats of Dawid Malan and Joe Root to be pouched by Carey and David Warner at first slip, respectively. Ben Stokes, playing his first competitive cricket match since July, fended a rising delivery from Cummins to Marnus Labuschagne at third slip. Though Pope and Hameed lifted England to safety till lunch, neither of them could go on for long as Cummins and Co. kept them under 150. Brief scores: England 147 all out in 50.1 overs (Jos Buttler 39, Ollie Pope 35, Pat Cummins 5/38; Mitchell Starc 2/35) vs Australia. /IANS

As internal Senate wrangling abates, approval of US envoy to India could proceed
[Paris: Giant portraits of late French politician Simone Veil, right, and diplomat Jean Monne, left, are displayed outside the Pantheon before a tribu

UNited Nations, Jan 6 : The UN has called for maximum restraint after the Houthi militia in Yemen seized a United Arab Emirates (UAE) ship. While the circumstances are unclear, the world organiz […]

Lahaul-Spiti: Women walk to their home after collecting water from a near frozen water body amid accute shortage, in a village in Lahaul-Spiti district, Friday, Jan. 7, 2022. ( /PTI […]