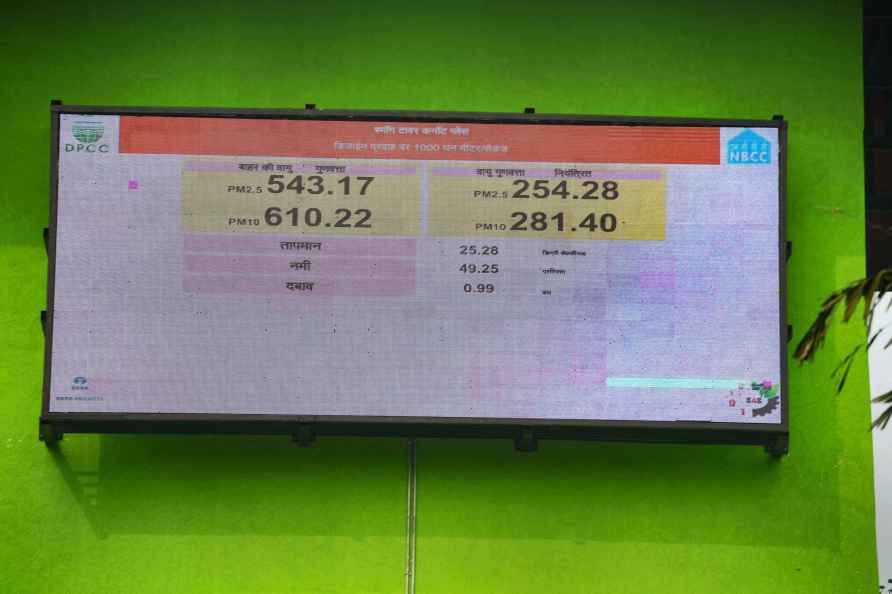 New Delhi, Dec 7 : A total of 63,727 trucks carrying non-essential commodities have been inspected and 31 impounded since the implementation of the CAQM's guideline to bar entry of non-CNG and non-electric trucks in the national capital to prevent further deterioration of air quality. This data was shared in a compiled Action Taken Report (ATR) with regard to directions taken by the Commission for Air Quality Management (CAQM) on December 17 under section 5 of Environment (Protection) Act, 1986 "in public interest to curb high air pollution in Delhi". As per the initial guidelines, the entry of trucks in Delhi except those carrying essential commodities, till November 21 (subject to further review for extension) was stopped. On November 24, Delhi Environment Minister Gopal Rai, following the commission's order, announced the further extension of the ban till December 3. "We have decided that starting November 27, CNG and electric trucks will be allowed to enter. Other trucks will remain banned till December 3. From November 27, CNG and electric trucks, as well as essential service vehicles, will be allowed to enter and the others will remain banned till December 3," he had told media in a conference. The order was further extended till December 7 to reduce vehicular emission in the city. Meanwhile, to control the dust pollution, up until December 5, a total of 576 sites have been visited by the Commission's Flying Squads and based on serious violations and non-compliances observed in such sites across different sectors namely, industries, industrial areas, construction & demolition (C&D) sites, DG sets in commercial, residential setups and other miscellaneous sectors, etc., a total of 111 units sites have been identified for immediate closure, which include 28 Industrial sites, 42 Construction & Demolition (C&D) sites and 41 Diesel Generator (DG) sets. In terms of geographical jurisdiction, 30 of these sites are in Delhi, 23 in Haryana (NCR), 43 in Uttar Pradesh (NCR) and 15 in NCR of Rajasthan. There is a blanket ban on all the construction and demolition (C&D) activities in the city until further orders. While stubble burning in the neighbouring states of Uttar Pradesh, Haryana and Punjab is reported to be a major source of pollution in the capital, dust from the construction and demolition activities, vehicular emission and pollution from open burning contribute as the city's own source of pollution. Delhi's air quality started deteriorating in the first week of November due to change in the wind direction, increase in stubble burning in its neighbouring states and bursting of firecrackers during Diwali. Its AQI continued to settle in the 'hazardous' category for about a week. Post which the Supreme Court took notice of the matter, directing the Delhi government to come up with scientific measures to bring the pollution level down. It is only after a complete month that Delhi's AQI began to settle in the lower end of the very poor category. On Tuesday morning, its AQI stood at 314 with the level of PM 2.5 and PM 10 pollutants at very poor and moderate categories, respectively. /IANS

Inclement weather to continue in J&K, Ladakh till Jan 9
Srinagar, Jan 6 : Moderate to heavy snowfall occurred in the higher reaches of Jammu and Kashmir and Ladakh on Thursday as the weather office has fore

Mumbai, Jan 6 : Kerala boy Zamroodh talks about his journey so far on 'India's Best Dancer 2' as a contestant as he is also termed as the 'South Indian Superstar'. Zamroodh has made his way to t […]