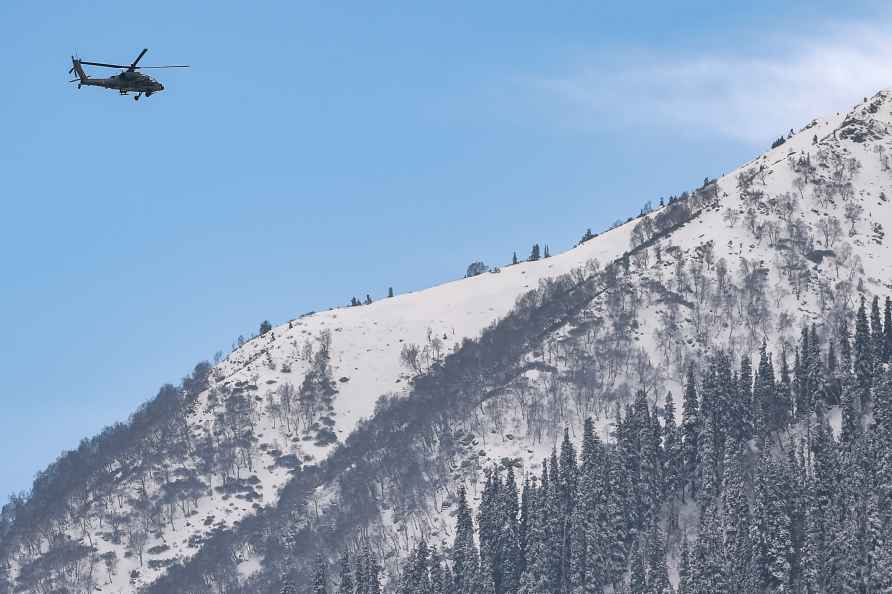 [Gulmarg: Indian Air Force, Navy and Army personnel during a joint exercise at snow clad higher reaches of Gulmarg on the heights of 9000 feet, in Baramulla district of North Kashmir, Tuesday, Dec. 7, 2021. ( /PTI] Srinagar, Dec 7 : The Srinagar-based Chinar Corps has conducted a helicopter-borne training and validation exercise in the higher reaches of Kashmir Valley, the army said on Tuesday. The tri-service exercise undertaken in Kashmir with the Indian Air Force, Navy, and Army was planned to validate the joint capability to insert a task force tactically behind enemy lines in an intense air defence and electronic warfare operating environment. "The successful conduct of the mission validated the true spirit of jointness achieved in planning, utilisation of resources, and accomplishment of laid down mission objectives as a true reflection of the tri-service ethos of the Indian armed forces," the army said. The heli-dropped task force operated in snow-clad region at heights over 9,000 feet. It included troops from infantry, the special forces and the MARCOS (Marine Commandos from the Indian Navy. The exercise included full transportation and armed helicopters from Indian Army and Indian Air Force including the Apaches attack helicopters. Aspects related to electronic warfare were also validated. "The exercise showcased the capability of the Chinar Corps and the Indian Army to carry out successful operations in high altitude areas incorporating all facets of contemporary and modern battle field in synergy with Indian Air Force and Indian Navy," the army said. /IANS

By Vishnu Makhijani New Delhi, Jan 6 : Some people just go on and on with a burning desire to pass on their knowledge to the next generation. After more than four decades in the corporate world, dur […]

[Guwahati: School students attend classes by wearing safety mask at Rupnagar Bidyapith M.E School ahead of the declaration of the new SOP in the state amid rising cases of Omicron variant of COVID-19 […]

Melbourne: Naomi Osaka of Japan plays a forehand during their singles...

Melbourne: Naomi Osaka of Japan plays a forehand during their singles match against Andrea Petkovic of Germany at Summer Set tennis tournament ahead of the Australian Open in Melbourne, Australia, Fri […]