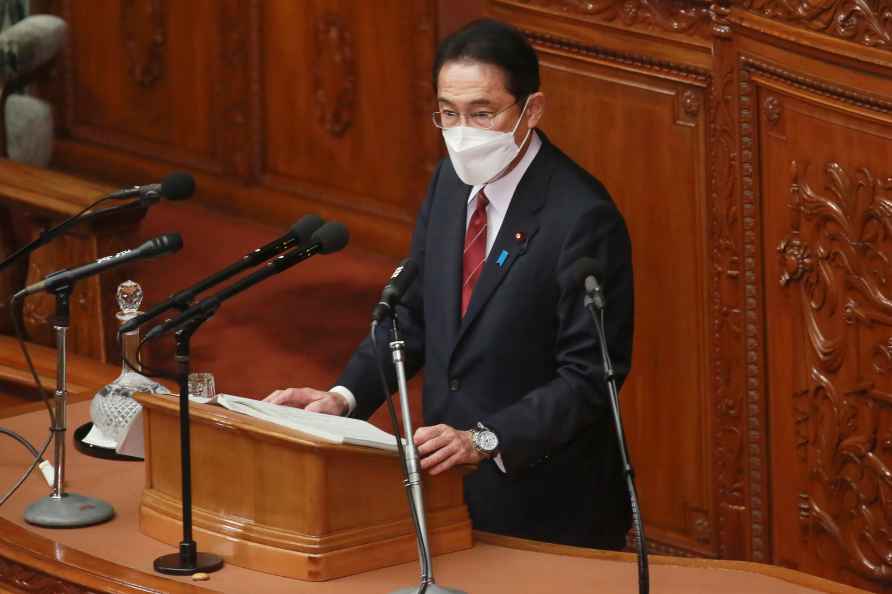 [Tokyo: Japanese Prime Minister Fumio Kishida delivers his policy speech during an extraordinary Diet session at the lower house of parliament in Tokyo, Monday, Dec. 6, 2021. Japan confirmed on Monday its third case of a new variant of the coronavirus from an entrant from Italy, as the Prime Minister Fumio Kishida vowed to get prepared based on a worst-case scenario in dealing with a next resurgence. /PTI] Tokyo, Dec 6 : Japanese Prime Minister Fumio Kishida on Monday vowed to "prepare for the worst" in dealing with the Omicron Covid-19 variant, while still promoting the economic recovery of the country. In his policy speech at the beginning of an extraordinary parliamentary session, Kishida also voiced hope for further debate on constitutional revision and pledged to conclude a sweeping review of security policy in about a year, reports Xinhua news agency. Although the Covid-19 situation in Japan has significantly improved, Kishida warned of "new risks including the confirmation of the Omicron variant across a number of countries". "We will maintain our stance of being cautious and prudent," the Prime Minister said, adding Japan has added 10,000 hospital beds for Covid patients since the summer and would possibly approve the use of an oral treatment drug later this month. He said the digital certificates for people who have been fully vaccinated against Covid-19 would be ready to give out on December 20 by the government. Referring to a decision to ban new entries of foreigners into Japan due to concerns over the Omicron variant, Kishida said he is "ready to accept criticism that I'm being too cautious before we have an adequate grasp of the situation". Moreover, the Prime Minister pledged to support businesses and workers adversely affected by the impact of the pandemic through an enormous stimulus package, funded mostly with a record 36 trillion yen ($319 billion) fiscal 2021 supplementary budget expected to be passed by Parliament during the extraordinary session. Regarding the constitutional reform, Kishida emphasized that lawmakers "have a responsibility to seriously consider" whether or not to amend the supreme law. "In a time of rapid change, we should spark wide debate among the public on whether the current Constitution is fitting for today," he said. Kishida said the government would "drastically" increase tax incentives for firms to raise wages in response to his promise of achieving his "new capitalism", which not only sparks growth in the Japanese economy but also redistributes wealth to the middle class. In order to promote digital technology, he said his government would lay underwater cables around Japan to form a "superhighway" for high-speed internet. The extraordinary parliamentary session started Monday afternoon and would run through December 21. /IANS

After security breach, PM Modi cancels Ferozepur visit
[** EDS: IMAGE POSTED BY @blsanthosh** Ferozepur: Prime Minister Narendra Modi's convoy stuck on a flyover as the road was blocked by a group of prote

EC to take stock of poll preparations in Manipur

New Delhi, Jan 5 : The Election Commission of India will take stock of poll preparations in Manipur on Wednesday via video conferencing. The EC had met a day before to deliberate on holding elections […]

Srinagar, Jan 5 : Morning flights to and from Srinagar International airport were cancelled on Wednesday due to poor visibility while travellers have been advised not to undertake journey on the Srina […]

New Delhi, Jan 5 : Morning began with light rain across many areas of the national capital followed by fog in some areas even as the IMD has predicted thunderstorm with rain on Wednesday. The In […]