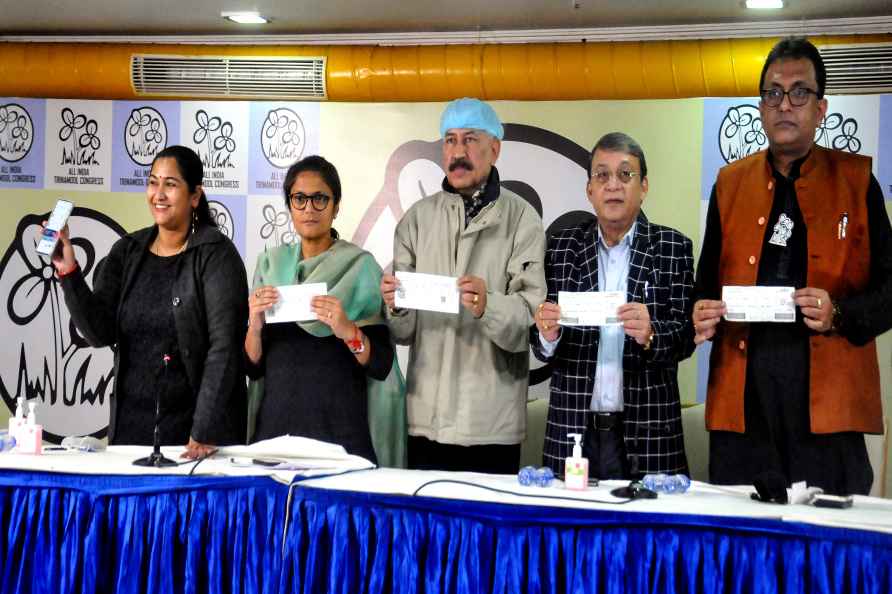 [Kolkata: Trinamool Congress MPs Sushmita Dev, Prasun Banerjee (C), Aparupa Poddar (L), Shantanu Sen (R) and party leader Biswajit Deb (2R) show the boarding passes of their flight to Nagaland, during a press conference after cancelling their visit owing to prohibitory orders in the area, in Kolkata, Monday, Dec. 6, 2021. ( /PTI] Kolkata, Dec 6 : The five-member delegation of the Trinamool Congress that was likely to go to Nagaland's Mon district on Monday to meet the families of civilians killed in the December 4 firing, cancelled the visit after the Nagaland government imposed section 144 in the affected area because of the deteriorating law and order situation. Addressing a press conference after the cancellation of the visit, former Mizoram advocate general Biswajit Deb, one of the members of the delegation team said, "We came to know that we will not be allowed to get out of the Jorhat airport because of Section 144 imposed in the area. The vehicle movement has been suspended and no gathering is being allowed. We were trying to go there to express our solidarity and not to create political disturbance. So we decided to cancel our visit. We will go there after the situation becomes normal". Trinamool Congress Rajya Sabha MP Sushmita Dev who was leading the delegation, said, "The problem of Nagaland is deep rooted and it has been aggravated after BJP came to power. Home minister Amit Shah is a total failure. He has only been successful in giving security to BJP and not to the country. We demand an individual judicial inquiry into the whole thing". When asked whether the killing is a result of the army's high handedness, Dev said, "This is a result of lack of coordination of the army with the state government. The central government has extended the territorial jurisdiction of thee BSF allowing them more power. The central government will have to realise without the help of the state, the central forces cannot function neutrally and properly". The five-member delegation from Trinamool Congress was supposed to visit Nagaland on Monday to meet the families of the civilians who were mistakenly killed by the security forces. The five-member team including four MPs - Sushmita Dev, Shantanu Sen, Aparupa Poddar and Prasun Bandopadhyay, was to reach in a village in Mon district on Monday. Earlier, West Bengal Chief Minister Mamata Banerjee expressed her condolences to the families of the bereaved. "Worrisome news from #Nagaland. Heartfelt condolences to the bereaved families. I pray for the speedy recovery of those who were injured. We must ensure a thorough probe into the incident and ensure that all victims get justice!" the chief minister wrote in her tweet. The situation in the area remained tense after security forces opened fire on civilians, which, the police said, was possibly a case of mistaken identity. Security forces had reportedly been tipped off about insurgents belonging to the Yung Aung faction of the banned outfit NSCN (K) and were tracking their movements. On Saturday, army personnel mistook coal mine workers returning home in a pick-up van as insurgents and gunned them down. /IANS

Aden (Yemen), Sep 28 : At least three soldiers of Yemen's joint pro-government forces were killed and 10 others injured in clashes with the Houthi fighters in the country's Red Sea port city of Hodeid […]