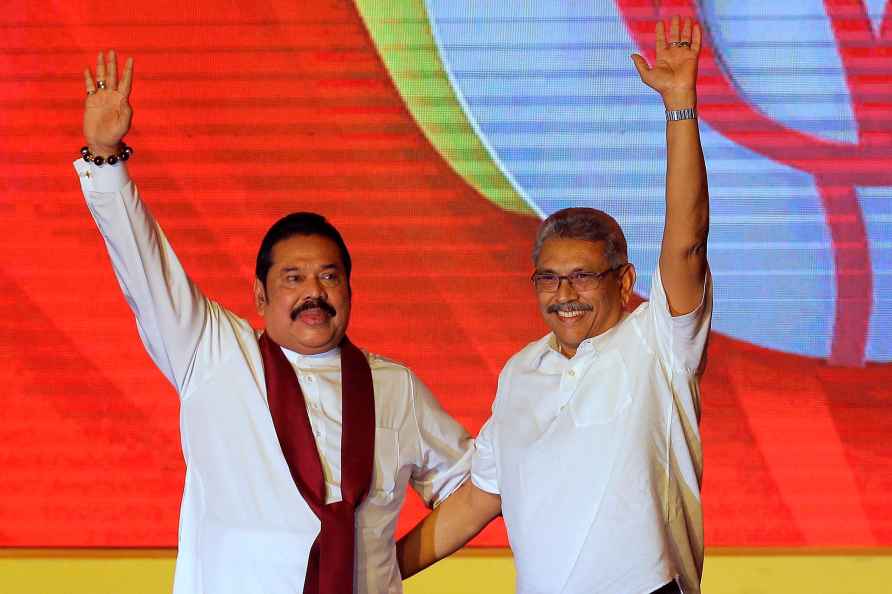 Colombo, Dec 4 : Sri Lankan President Gotabaya Rajapaksa on Saturday urged Pakistan government to ensure safety of others Lankans working in Pakistan following the brutal murder of a Sri Lankan employee at a factory in Sialkot on Friday. Posting a Twitter message, President Rajapaksa said: "Deeply concerned by the incident in Sialkot #Pakistan. #SriLanka trusts that PM @ImranKhan and the Gvt. of Pakistan will ensure justice is served and ensure the safety of the remaining Sri Lankan workers in Pakistan." Following the murder of factory manager Priyantha Kumara, Pakistan Prime Minister Imran Khan said the horrific attack and burning alive of a Sri Lankan is a day of shame for Pakistan. Khan also said investigations are underway to arrest the culprits and those responsible would be punished. Over 100 who were allegedly involved in the attack have been arrested. Meanwhile Sri Lanka High Commissioner in Pakistan Vice Admiral Mohan Wijewickrama has said that the Pakistan's foreign ministry has given an undertaking on the safety of the remaining Sri Lankan employees in Pakistan. The Lankan envoy has said that the arrangements have been made to bring down the remains of the SL Factory Manager from Lahore to Colombo. Meanwhile, Prime Minister Mahinda Rajapaksa in a message demanded justice for the murder of Lankan worker. "Shocking to see the brutal and fatal attack on Priyantha Diyawadana by extremist mobs in #Pakistan. My heart goes out to his wife and family. #SriLanka and her people are confident that PM @ImranKhanPTI will keep to his commitment to bring all those involved to justice," Rajapaksa said in a Twitter message. /IANS

Plastic bags with beef hung outside 3 temples in B'desh
By Sumi Khan Dhaka, Jan 2 : Plastic bags containing raw beef were hung on the doors of three Hindu temples and a house in Gendukuri village in Bang

'India has offered B'desh use of inland waterways system up to Varanasi'
By Sumi Khan Dhaka, Jan 1 : The High Commissioner of India in Bangladesh Vikram Doraiswami has said that India has offered the use of its inland wa

New Delhi, Jan 3 : Considering the rising cases of COVID-19 due to the Omicron variant of the Novel Coronavirus, the All-India Football Federation (AIFF) and the participating clubs have unanimously d […]

[Washington: President Joe Biden meets with the White House COVID-19 Response Team on the latest developments related to the Omicron variant in the South Court Auditorium in the Eisenhower Executive O […]

Rupee inches 6 paise higher at 74.52 against US dollar in early trade.