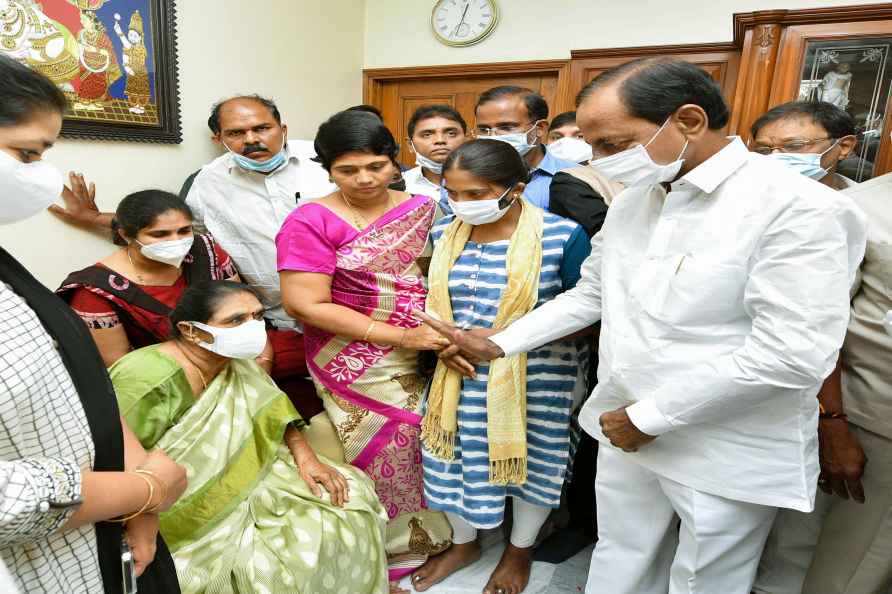 [Hyderabad: Telangana Chief Minister K Chandrashekar Rao meets the family members of former chief minister of undivided Andhra Pradesh K Rosaiah, who passed away today morning, in Hyderabad, Saturday, Dec. 4, 2021. ( /PTI] Hyderabad, Dec 4 : Tributes are pouring in from all corners of the Telugu states, for former chief minister of combined Andhra Pradesh, K. Rosaiah who passed away on Saturday. Telangana chief minister K. Chandrashekhar Rao expressed his condolences, and remembered Rosaiah as one of the "leaders who brought many laurels to the posts he had held, such as the finance ministry." Telangana governor Dr Tamilisai Soundararajan expressed grief and shock at the passing away of the former Governor of Tamil Nadu and former chief minister of the erstwhile Andhra Pradesh. Paying rich tributes to his memory, the Governor termed him as an iconic politician in the undivided Andhra Pradesh. "It is a great testimony to his unmatched acumen in administration that he presented the State Budget for a record number of 15 times," the governor observed. In neighbouring Andhra Pradesh from where Rosaiah hails, chief minister Y.S. Jagan Mohan Reddy expressed grief over the demise of Rosaiah, and conveyed condolences to the bereaved family members. Governor Biswabhushan Harichandan expressed sorrow over Rosaiah's death, and described him as a leader with values. The Jana Sena Party leader Pawan Kalyan described Rosaiah's death as a void that can never be filled for the Telugu states. Congress leaders from Telangana and Andhra Pradesh, have paid tributes to the party veteran and loyalist. The government of Telangana has announced a three-day mourning for the former chief minister who was at the helm of affairs of the undivided state of Andhra Pradesh, from 2009 to 2011. Arrangements are being made for his funeral to be conducted with police honours. Rosaiah was rushed to hospital on Saturday morning after his pulse rate reportedly fell. The hospital bulletin stated that the former chief minister was brought to the hospital in an unresponsive state. Rosaiah was declared dead at 8.20 a.m. He is survived by wife, three sons and a daughter. His body has been shifted to his residence for people to pay their final respects. The funeral is to take place on Sunday, according to family sources. Sworn in as chief minister following the death of Dr Y.S. Rajasekhara Reddy in a helicopter crash, Rosaiah had served as the chief minister of Andhra Pradesh from September 3, 2009 to November 24, 2010. After stepping down as chief minister, the wizened old Congress-man had served as Tamil Nadu governor, from 2011 to 2016. Earlier he had served as finance minister and has the distinction of presenting the state budget for a record 15 times. Born in 1933, Rosaiah began his legislative journey as a member of the Andhra Pradesh Legislative Council in 1968. He also represented Chirala in the Andhra Pradesh Assembly. /IANS

Oil depot on fire in Russian city near Ukraine border
[Bryansk: In this photo taken by an anonymous source, smoke rises from oil storage facilities hit by fire in Bryansk, Russia, Monday, April 25, 2022.

Jaipur, April 25 : Chief Minister Ashok Gehlot has approved investment proposals worth Rs 71,486 crore in Rajasthan aimed at generating over 26,000 jobs. While chairing the second meeting of the […]

Bhubaneswar, April 25 : The Special Task Force (STF) of Odisha police has arrested a wildlife criminal for smuggling one live pangolin Boudh district, police said on Monday. According to police […]