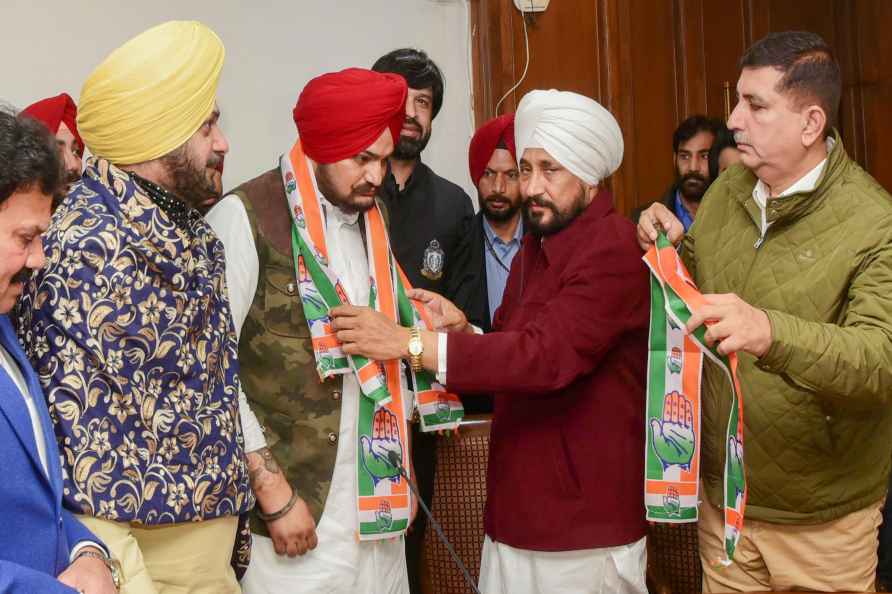 [Chandigarh: Punjabi singer Sidhu Moosewala joins the Congress party in the presence of Punjab Chief Minister Charanjit Singh Channi and President of Punjab Congress Navjot Singh Sidhu, in Chandigarh, Friday, Dec. 3, 2021. ( /PTI] Chandigarh, Dec 3 : Famous Punjabi singer Sidhu Moosewala, who was booked on charges of promoting violence and gun culture in a song, on Friday joined the Congress ahead of the Assembly polls in Punjab. He joined the party in the presence of Chief Minister Charanjit Singh Channi and State Congress president Navjot Singh Sidhu. During the induction ceremony, Sidhu described Moosewala as a youth icon. "Sidhu Moosewala is joining our family. I welcome him in the Congress fold," Sidhu told the media. Describing Moosewala as a "big artiste", Channi said with his sheer hard work, he has won the hearts of millions of people. Moosewala, whose real name is Shubhdeep Singh Sidhu, is known for his hit Punjabi tracks like 'Legend', 'Devil', 'Just listen', 'Jatt da Muqabala' and 'Hathyar', among many others. His name also featured in the Billboard Canadian Albums in 2018. "I am not entering politics for status or to earn praise. I want to become a part of the system to transform it. I am joining the Congress to raise the voice of the people. I am joining the Congress as the party has leaders who have come from common families," Moosewala said. He said he is still living in the same house in his village. His father is an ex-serviceman and his mother is a sarpanch. "Residents of my area have expectations from me," he added. /IANS