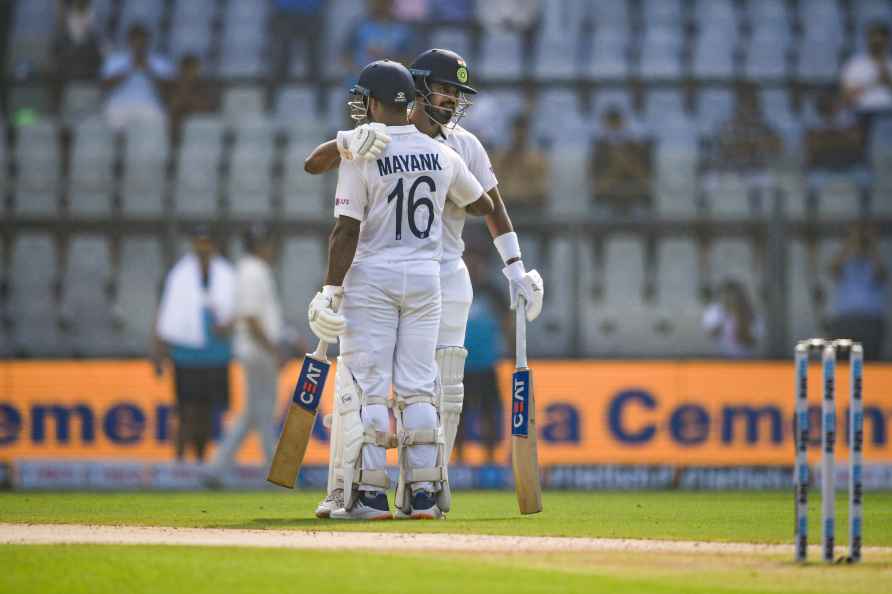 [Mumbai: Indian batter Mayank Agarwal celebrates his half century on the first day of 2nd Test match played between India and New Zealand at Wankhede stadium, in Mumbai, Friday, Dec. 3, 2021. ( /PTI] Mumbai, Dec 3 : Opener Mayank Agarwal struck an unbeaten half-century but New Zealand wrested the initiative from India on the back of three wickets by off-spinner Ajaz Patel at tea on a truncated opening day of the second and last Test of the series at the Wankhede Stadium here on Friday. India were 111/3 in 37 overs with Agarwal batting on 52 and Shreyas Iyer, who struck a century on debut in the first Test, keeping him company with seven runs. After skipper Virat Kohli opted to bat on winning the toss, India were off to a good start with Agarwal and Shubman Gill raising 80 runs, milking the bowling as none of the four bowlers except Patel could make an impression. Agarwal hit four boundaries and two well-timed sixes of the spinners. With the first session lost due to wet patches on the bowlers' run-up, play started at 12 noon and the conditions suited the batters. Both Gill and Agarwal did well to take control of the second session and looked set for a big partnership. However, Patel claimed three wickets in the space of 15 deliveries to claim the honours for New Zealand. He bowled with a nice loop and extracted turn. He kept a tight line and though Gill and Agarwal carted him for some boundaries, he kept his cool -- getting Gill out for 44 and Cheteshwar Pujara and Kohli for a duck. Kohli got out to a doubtful decision as the TV umpire could not conclusively rule that he had not inside-edged onto his pads. The delayed start robbed the wicket of whatever early morning juice it had and there was no assistance for the Black Caps' pacers. Though Tim Southee kept a good line and length and returned with figures of 10-1-15-0 in two spells, others were not as disciplined. Gill struck Kylie Jamieson for three fours in his first over, two of them off successive deliveries. Jamieson's first two deliveries were fullish but Gill capitalised on them. Initially, Patel too did not get much purchase from the pitch and the Indian duo reached 50 off 109 balls -- Gill adding 27 and Agarwal 23. But disaster struck India in the 28th over when Gill went for a drive off a flighted delivery and edged it into Ross Taylor's hands in the slips. India lost two more wickets on the same score of 80 with Pujara and Kohli falling to Patel in his next over as the hosts slumped from 80 for no loss to 80/3 in the space of 15 deliveries. Pujara stayed for only five deliveries and got out as he jumped out to a flighted delivery by Patel and the ball went off his pads onto his stumps. Kohli, who came in next, survived four deliveries and was out when TV umpire Vinod Sharma took a long look at the replays but could not conclusively rule that there was no edge onto the pads as Kohli played a forward defensive shot, with the bat and pad close to each other. With the TV DRS review remaining inconclusive, the ruling by the on-field umpire was upheld. Earlier, India lost three players to niggles as Ishant Sharma, vice-captain Ajinkya Rahane and all-rounder Ravindra Jadeja were ruled out of the Test. The BCCI secretary Jay Shah informed that Sharma was out with a dislocated left little finger, Jadeja has a right forearm injury while Rahane has a slight left hamstring strain -- all three getting hurt during the final day of the first Test at Kanpur. New Zealand lost skipper Kane Williamson to a recurring elbow injury that flared up during the first Test at Kanpur. Latham led the side in his absence. The start of the match was delayed by some wet patches on the bowlers' run-up area. Umpires Anil Chaudhary and Nitin Menon had two inspections and decided to start the match at 12 noon. Brief scores: India 111/3 in 37 overs (Mayank Agarwal batting 52, Shubman Gill 44; Ajaz Patel 3/30) vs New Zealand. /IANS

Ukraine and Kazakhstan - The Russian dilemma
[Ivanovo: In this photo taken from video provided by the Russian Defense Ministry Press Service, Russian peacekeepers of the Collective Security Treat

Virat Kohli steps down as Test captain of India, day after losing series against South Africa
[**EDS: FILE IMAGE** Southampton: In this file image dated, Tuesday, June 22, 2021, India's captain Virat Kohli reacts as he walks off the field at th

6 injured after shooting outside concert hall in US Eugene

San Francisco, Jan 16 : Six people were injured after a shooting outside a concert hall in Eugene, US state of Oregon, police said. Of the six victims that were shot and hospitalised, one was in […]

Tegucigalpa, Jan 16 : A caravan of Honduran migrants left for the US from the northern city of San Pedro Sula. Dozens of people arrived Friday evening at the Metropolitan Transportation Center i […]

Khartoum, Jan 16 : The African Union (AU) has expressed readiness to support consensus among all political parties in Sudan to achieve a political transition in the country. The AU's position wa […]

New York, Jan 16 : The US Centers for Disease Control and Prevention (CDC) has updated its guidance on masks for the general public, saying that people can choose to wear N95 and KN95 masks because th […]