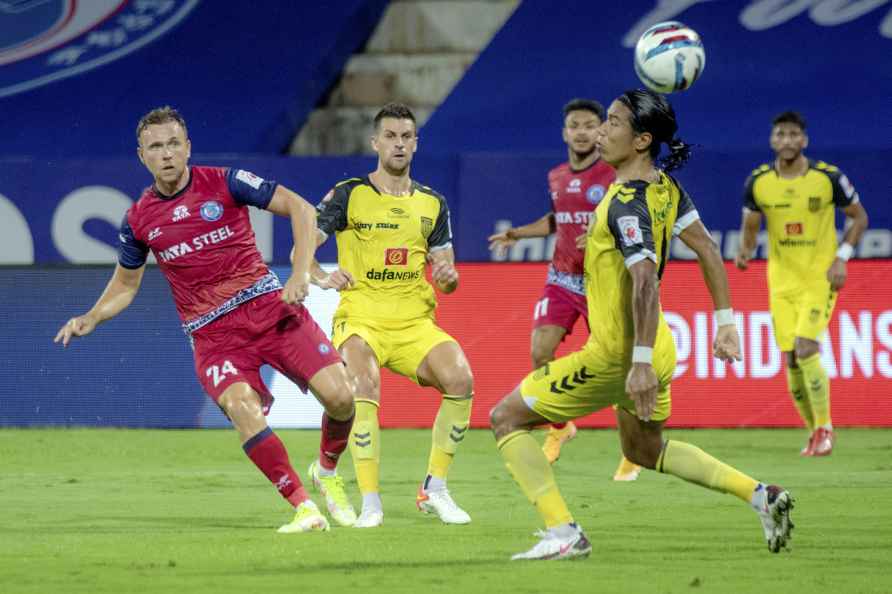 [Goa: Greg Alexander James Stewart (L) of Jamshedpur FC attempts to score a goal during match 15 of season 8 of Indian Super League football tournament between Jamshedpur FC and Hyderabad FC, at the GMC Athletic Stadium, in Goa, Thursday, Dec. 2, 2021. (ISL/ /PTI] Bambolim (Goa), Dec 2 : Jamshedpur FC and Hyderabad FC will look for morale-boosting wins when they meet in the Indian Super League (ISL) match at the Athletic Stadium in Bambolim, Goa later on Thursday. Jamshedpur FC are unbeaten in this season, having drawn their first game against SC East Bengal, and then winning their second one against FC Goa. New signing Peter Hartley has been spectacular in leading Jamshedpur FC's defence while striker Nerijus Valksis has who ended his goal drought against FC Goa will once again pose a big threat to Hyderabad FC. On the other side, Hyderabad FC are fresh off a victory against Mumbai City FC -- their first-ever against them in Hero ISL history -- after a 1-0 loss against Chennaiyin FC in their opening game. Youngster Rohit Danu and striker Bartholomew Ogbeche have been remarkable for their side winning the last game for them. Although they shared the spoils in their first game against SC East Bengal, Jamshedpur FC looked resilient and kept their composure, dominating the possession in that match. Jamshedpur FC ran riot against FC Goa in their second game with a brace from Nerijus Valskis and a goal from Jordan Murray in the latter half of the game, eventually winning 3-1. Hyderabad FC were the better team in their first game against Chennaiyin FC, but they didn't have their shooting boots on and conceded a goal via a penalty in the second half of the game. Manuel Marquez's men rectified their mistakes and eked out a win against current champions Mumbai City FC in their second game, winning 3-1. As far as key players are concerned for the Jamshedpur FC, the 34-year-old forward Nerijus Valskis has been on fire this season, having three-goal contributions in two games already. Valskis will be hungry for more goals against Hyderabad FC with support from Greg Stewart and Komal Thatal. However, Peter Hartley is the leader of the pack, keeping the Jamshedpur backline strong and composed. The defender helped his team equalise in the first match with a header in injury time in the first half. In Hyderabad FC, Rohit Danu, the 19-year-old Indian youngster has been lauded as the future of Indian football several times by Hyderabad FC coach Manuel Marquez. Surely, Danu lived up to the hype as he came off as a substitute in his last match and scored a goal against FC Goa. Bartholomew Ogbeche is one of the most experienced players in the ISL, and is already off the mark in the new season. Ogbeche's clinical finishing is an intimidating factor for the opponent team, making him a valuable asset for the Hyderabad side. Jamshedpur FC and Hyderabad FC have faced each other four times with three of those encounters ending in draws. The Red Miners have one win to their name while Hyderabad FC are yet to taste victory against their opponents on Thursday. /IANS