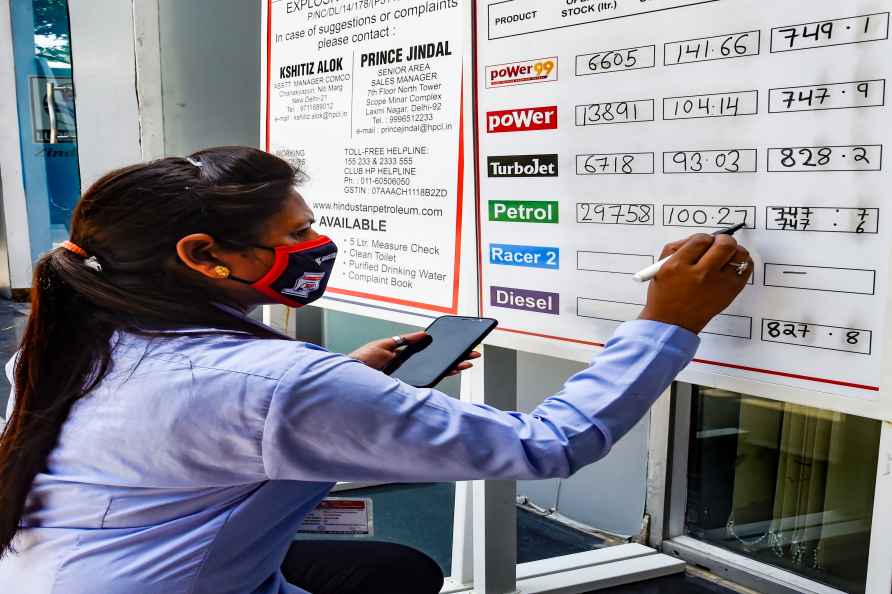 New Delhi, Dec 2 : Barring Delhi, the prices of diesel and petrol remained unchanged across major Indian cities on Thursday. Accordingly, diesel and petrol prices in Delhi stood at Rs 86.67 per litre and Rs 95.41 per litre, respectively. Notably, prices of petrol in Delhi had been static at Rs 103.97 per litre since the past one month. Prices have fallen in Delhi as it reduced the value added tax on the fuel from 30 per cent to 19.40 per cent. This decision was taken during a Cabinet meeting chaired by Chief Minister Arvind Kejriwal on Wednesday. In the financial capital Mumbai, petrol and diesel prices remained unchanged at Rs 109.98 and Rs 94.14 respectively. Prices also remained static in Kolkata at Rs 104.67 and Rs 89.79 respectively. In Chennai too, the prices of the two auto fuels remained constant at Rs 101.40 and Rs 91.43 respectively. Across the country as well, the prices largely remained unchanged on Thursday, but the retail rates varied depending on the level of local taxes. /IANS

Cured of Covid-19? Please wait for 1-3 months to buy life cover
Chennai, Jan 19 : Cured of Covid-19 and wanting to buy a life insurance policy? Then wait for a period ranging from one to three months, say life insu

Thiruvananthapuram, Jan 19 : V.D. Satheesan, the Leader of Opposition in Kerala Assembly, on Wednesday visited the house of a couple in the state capital, who for more than a year, were harassed by a […]

Fishermen in TN yet to get paid for flood relief, rescue work

Chennai, Jan 19 : Fishermen in Tamil Nadu who had rescued people stranded during the floods in October, November 2021, are yet to receive the compensation they were promised. Fisheries departmen […]

Chennai, Jan 19 : Cured of Covid-19 and wanting to buy a life insurance policy? Then wait for a period ranging from one to three months, say life insurers. This has been the practice of some lif […]