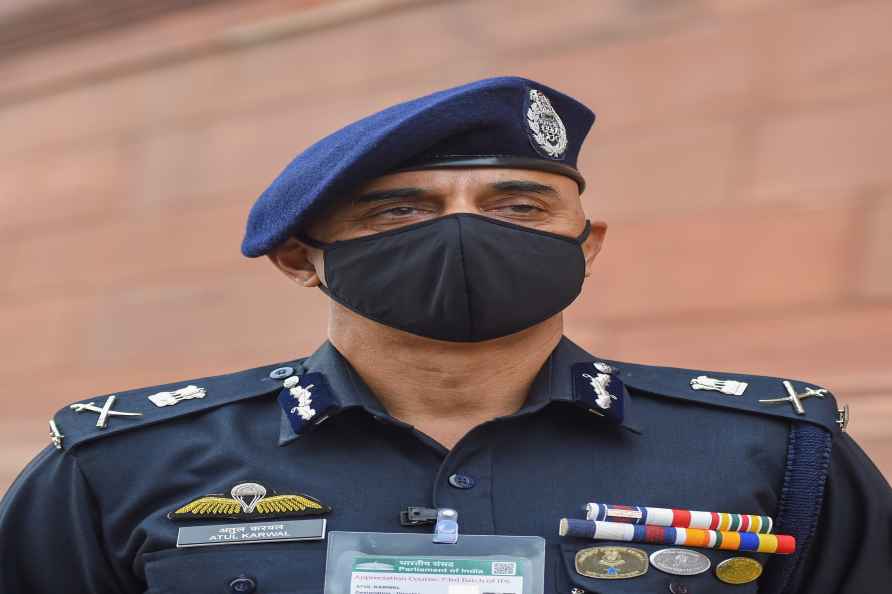 [New Delhi: National Disaster Response Force (NDRF) DG Atul Karwal comes out of the Parliament after a meeting with Prime Minister Narendra Modi on the cyclone related situation in the country, in New Delhi, Thursday, Dec. 2, 2021. ( /PTI] New Delhi, Dec 2 : The Lok Sabha on Thursday began discussion on the Covid-19 pandemic and various aspects related to it in the country, with members of the opposition and government taking potshots at each other over handling of the pandemic and vaccination. Initiating the debate, under Rule 193, Shiv Sena member Vinayak Raut said that only a third of Indians have received both doses of the vaccine so far and urged the government that there should be specific guidelines on the new Omicron variant. He also said that there was an apprehension that Mumbai would see huge casualties but fortunately, public health interventions went on well, with the guidance of Prime Minister Narendra Modi and Chief Minister Udhav Thackeray, even slum sprawl Dharavi was cleared of corona. Hitting out at the government, Raut claimed that the amount of vaccine doses supplied to different states was not according to their respective population, and that if the government had ramped up production of Covaxin, which has a gap of only 28 days between doses, India would have seen faster, higher rates of vaccinations. "In the first wave, the private doctors did not rise to the occasion, but in the second wave, the hospitals opened their shops, and depending on insurance coverage, billed poor patients exorbitantly," he said. Raising the issue of PSA plants in the country, the Shiv Sena member said that out of 1500 PSA plants, only 363 plants are operational. "We were in need of PSA plants, ventilators and drugs, but at that time the 60 per cent ventilators under the PMCARES scheme were not working, therefore, the companies responsible for this mess, should be punished as they have broken the trust between government and people." BJP's Rattan Lal Kataria said the government has done a marvellous job during the pandemic, citing the vaccination milestones, hospital and lab testing infrastructure in the country. Accusing the Opposition, Kataria further said that it has a role in democracy and they should fulfill that role, but when it comes to serving humanity, it should not do politics. Referring to the ongoing farmer's protest, he also said that we saw a protest for over a year, but despite that, Indian farmers ensured production such that not a single person died of hunger. He also said that even US President Joe Biden and Vice President Kamala Harris have appreciated the country's efforts. /IANS

After more than 30 years, standing on England's football terraces returns
[London: Spectators take their places in the stands ahead of the English Premier League soccer match between Chelsea and Liverpool at Stamford Bridge

Mt Maunganui: Blackcaps Kyle Jamieson dives for a catch but just looses grip during play on day three of the first cricket test between Bangladesh and New Zealand at Bay Oval in Mount Maunganui, New Z […]

Rupee slips 6 paise to 74.35 against US dollar in early trade on the first trading session of 2022.