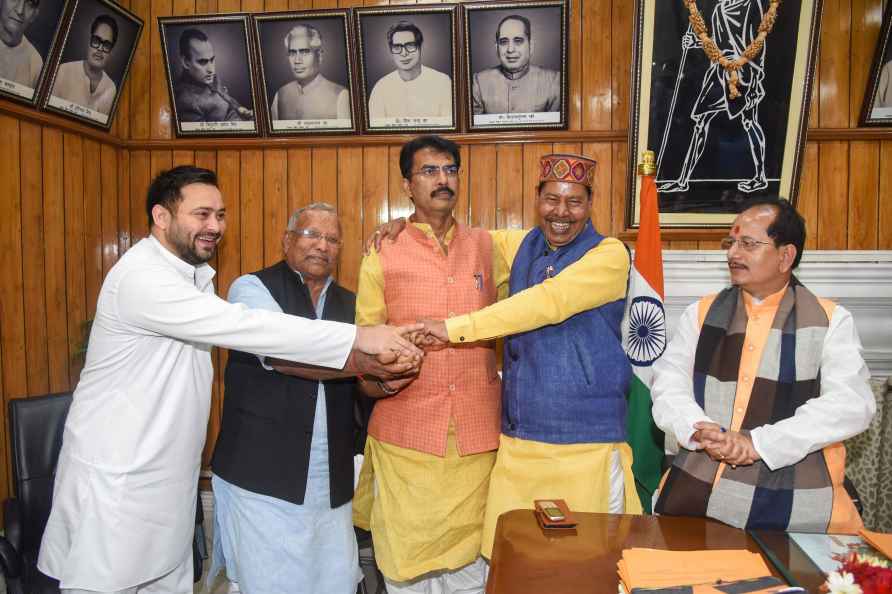 [Patna: Rashtriya Janata Dal MLA Bhai Virendra and BJP MLA Sanjay Saravgi go for compromise in the presence of Speaker Vijay Kumar SInha, RJD leader Tejashwi Yadav and Deputy CM Tarkishor Prasad following a verbal spat between them, during the Winter Session of the State Assembly, in Patna, Thursday, Dec. 2, 2021. ( /PTI] Patna, Dec 2 : Bihar minister Jivesh Kumar on Thursday said he has decided not to participate in the proceedings of the assembly until the state government suspends Patna DM Chandrasekhar Singh and SSP Upendra Sharma. Jivesh Kumar, Minister of Labour in the Nitish Kumar government, walked out from the Vidhan Sabha after sharing his ordeal with Speaker Vijay Sinha. He alleged that his car was stopped by security personnel at the gate of the Vidhan Sabha as the convoy of the DM and the SSP was crossing from that gate. "I request you sir (Speaker) to decide if DM and SSP have higher ranks or a cabinet minister? Due to these officers, security personnel deployed at the gate of Vidhan Sabha are insulting the elected representatives," Jivesh Kumar, a minister under the BJP quota in the Nitish Kumar government, said. "We need immediate suspension of these two officers. I would not participate in Vidhan Sabha proceedings until action is taken against them," Kumar said. "Sir (Speaker), you are the custodian of Bihar Vidhan Sabha. Hence, you must give assurance about action to be taken against them," he added. Jivesh Kumar also got the support of other BJP MLAs and opposition leaders inside the House. RJD MLAs said that the Bihar police are involved in brutal assault on opposition legislators during the monsoon session and misbehaviour with a cabinet minister. BJP MLAs and ministers had expressed concern over the dominance of the bureaucracy during a party meeting on Day 1 of the winter session. Many believed that it is better for the BJP to stay away from this government as officers do not listen to their grievances. Following the incident, Vijay Kumar Chaudhary, the parliamentary affairs minister, defended the SSP and DM. He blamed the traffic personnel deployed at the gate, who stopped the car of the minister. /IANS

After more than 30 years, standing on England's football terraces returns
[London: Spectators take their places in the stands ahead of the English Premier League soccer match between Chelsea and Liverpool at Stamford Bridge

By Vishnu Makhijani New Delhi, Jan 2 : General Ved Prakash Malik's endorsement of Shiv Kunal Verma's epic book, "1965: A Western Sunrise" is a show stopper in its own right. It's a classic case wher […]

Chennai, Jan 2 : Actor Vishal's much-awaited action entertainer that is to be directed by director Adhik Ravichandran has been titled 'Mark Antony'. Taking to social media, Vishal said, 'Here is […]

New Delhi, Jan 2 : Sirajul Haq, chief of the Jamaat-e-Islami (JI), has announced an anti-government movement, saying that the State Bank of Pakistan (SBP) is no longer in its control, rather it has be […]

Mumbai, Jan 2 : 'Devon Ke Dev Mahadev' and 'Mumbai Diaries 26/11' actor Mohit Raina has taken everyone by surprise by sharing pictures from his hush-hush wedding. Mohit took to Instagram on Satu […]