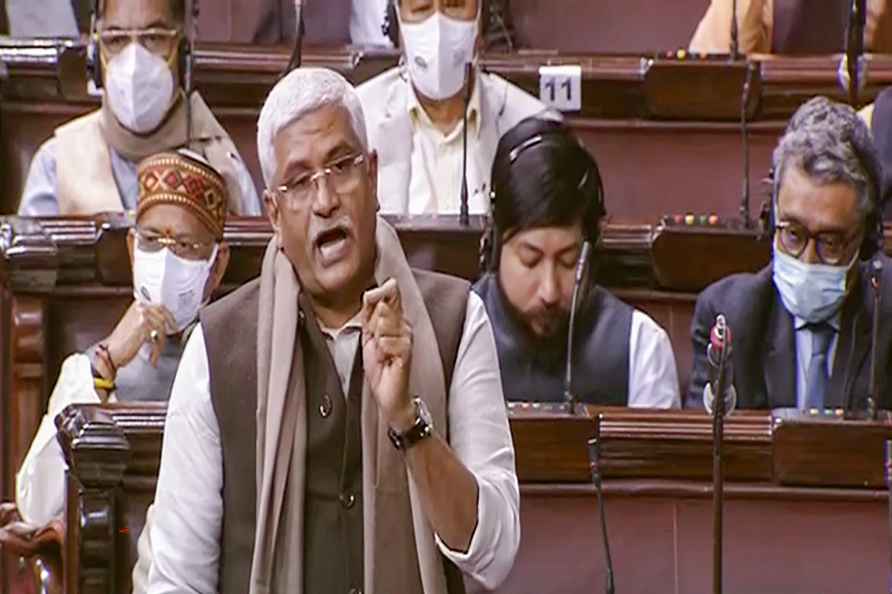 [**EDS: VIDEO GRAB** New Delhi: Union Minister of Jal Shakti Gajendra Singh Shekhawat speaks in the Rajya Sabha during ongoing Winter Session of Parliament, in New Delhi, Thursday, Dec. 2, 2021. (RSTV/ /PTI] Bengaluru, Dec 2 : Karnataka Chief Minister Basavaraj Bommai on Thursday left for New Delhi ahead of the winter Legislative session scheduled to be held from December 13. Chief Minister Bommai's scheduled programme earlier showed that he was taking up a two-day trip. However, while talking to reporters before leaving to the airport, he stated that he would return by Thursday evening. His repeated trips to New Delhi have also become a topic of discussion in the state political circles. Bommai is likely to meet top leaders and seek their guidance on tackling the opposition during the session on the Bitcoin scandal, corruption charges by contractors and shifting of ISRO programme from Bengaluru to Gujarat. The Congress camp is upbeat and looking ahead to the session to dent the image of the ruling party by raising these issues and gaining momentum for the upcoming elections of 2023 in the state. Ruling BJP camp is divided, and Chief Minister Bommai had earlier complained against a few top leaders to the party high command for providing documents to the Congress leaders against the government to put him in a fix. He is likely to ask the top leadership to tame the activities of the BJP leaders, sources said. He is scheduled to attend a private television channel programme and the rest of the itinerary is reserved. He is likely to meet Union Home Minister Amit Shah. He will also discuss booster dose to frontline workers with Union Health Minister Mansukh Mandaviya. Bommai is also planning to meet Jal Shakti Minister Gajendra Singh Shekawat to discuss the inter-state water disputes, including Krishna river water sharing and Mekedatu project. /IANS

PM to lay foundation for over 25 projects worth Rs 5,500 cr in Manipur, Tripura
[**EDS: TWITTER IMAGE POSTED BY @narendramodi ON MONDAY, JAN. 3, 2022.** Agartala: A view of the new Integrated Terminal building of Maharaja Bir Bikr

New Delhi, Jan 3 : Delhi Police have sought information from social media giant Twitter about the account that first tweeted about the 'Bulli Bai' app and asked it to remove the offensive content, sou […]

Vineet Raina opens up on his role in 'Choti Sarrdaarni'

New Delhi, Jan 3 : Actor Vineet Raina talks about his entry in the show 'Choti Sarrdaarni'. He is seen as Param, Seher's step brother in the serial. Talking about playing the role of Param, he s […]

San Francisco, Jan 3 : The second-generation AirPods Pro, likely to be launched later this year, may support lossless audio support and a charging case that makes a sound to help you find it. Th […]