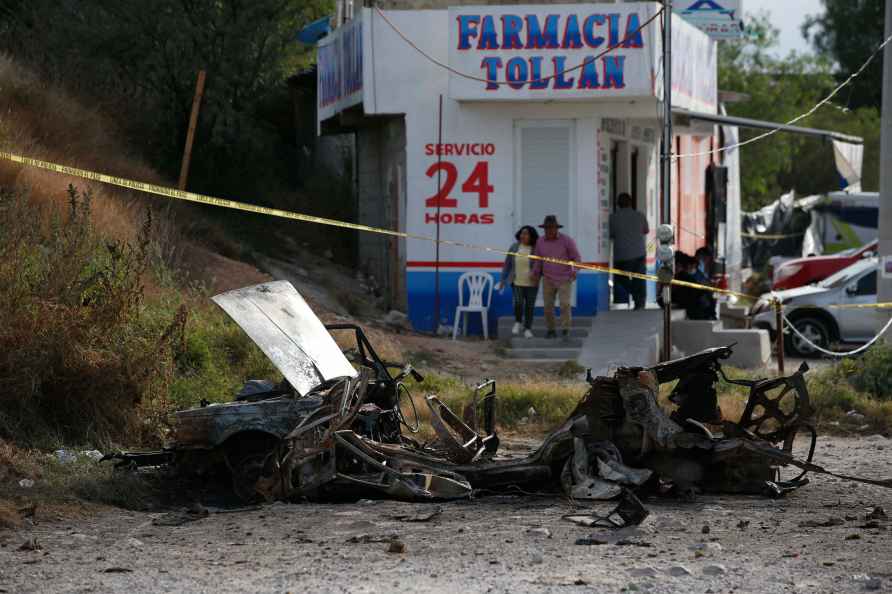 [UNDATED: Locals walk past a burned-out car outside the Tula General Hospital, after a gang rammed several vehicles into a prison and escaped with nine inmates, in Tula, Mexico, Wednesday, Dec. 1, 2021. Local media reported that the burned-out cars found in the city after the attack were car bombs. Authorities said they were investigating how the vehicles caught fire. /PTI] New Delhi, Dec 2 : The suspect in a Michigan school shooting will face charges of terrorism and first-degree murder following a rampage that left four students dead and seven injured. Prosecutors on Wednesday charged the Oxford High School student, who is 15 years old as an adult, the BBC reported. He has pleaded not guilty. Police are yet to identify a motive in the attack. The victims were named as Tate Myre, 16, Madisyn Baldwin, 17, Hana St Juliana, 14, and Justin Shilling, 17. Announcing the charges Oakland County prosecutor Karen McDonald said her office had "a mountain of digital evidence" to show the suspect had planned the attack "well before the incident". One such instance is a video of the suspect the night before the shooting, in which he discusses killing students. "This isn't even a close call," she said. "This was not an impulsive act." She added that it was "absolutely premeditated". McDonald said the teen will face one count of terrorism, four counts of first-degree murder, seven counts of assault with intent to murder, and 12 counts of possession of a firearm, with further charges likely as the investigation unfolds. The suspect will be transferred from a juvenile detention centre to the local county jail, where he will be held without bond. The teenager has refused to speak with investigators on the instructions of his family. At a later news conference, Oakland County Sheriff Michael Bouchard said charging the suspect as an adult was "the most appropriate" action. The sheriff stressed that the teenager had never been on the radar of law enforcement or the school. He also added there was no evidence the suspect had been bullied by his peers. "There is nothing that he could have faced that would warrant senseless, absolutely brutal violence on other kids," said Bouchard. He noted that the suspect's parents had been called to the school hours before the shooting "for behaviour in the classroom that was concerning". Investigators have found the suspect loaded his firearm -- purchased by his father on Friday -- in the bathroom and then walked through the hallway firing more than 30 shots from the weapon. Bouchard said the suspect appeared to fire indiscriminately during the attack at the school of around 1,700 students. Tate Myre reportedly tried to disarm the shooter, and more than 75,000 people have signed a petition calling for the school to rename its football stadium after Tate, reported the BBC. The 16-year-old, who played on the football team, died in a police officer's car on the way to hospital. Madisyn and Hana also died on Tuesday, while Justin was confirmed dead on Wednesday. Among those admitted to hospital, a 17-year-old female student remains in critical condition with a gunshot wound to the chest. /IANS

Over 12,000 NGOs including Jamia, Oxfam can no longer get foreign aid

New Delhi, Jan 1 : over 12,000 NGOs including Oxfam and Jamia Milia Islamia will no longer be able to receive any foreign donations as the Union Ministry of Home Affairs has not cleared the renewal of […]

Mumbai, Jan 1 : Filmmaker Karan Johar reflected upon the year gone by as he shared a string of pictures on his social media complemented by a thought-provoking note. Taking to his Instagram, the […]

Reasi: Devotees stand in queue outside Darshani deodi while on their way to Mata Vaishno Devi shrine, in Reasi district, Sunday morning, Jan. 2, 2022. At least 12 people were killed and 20 others inj […]