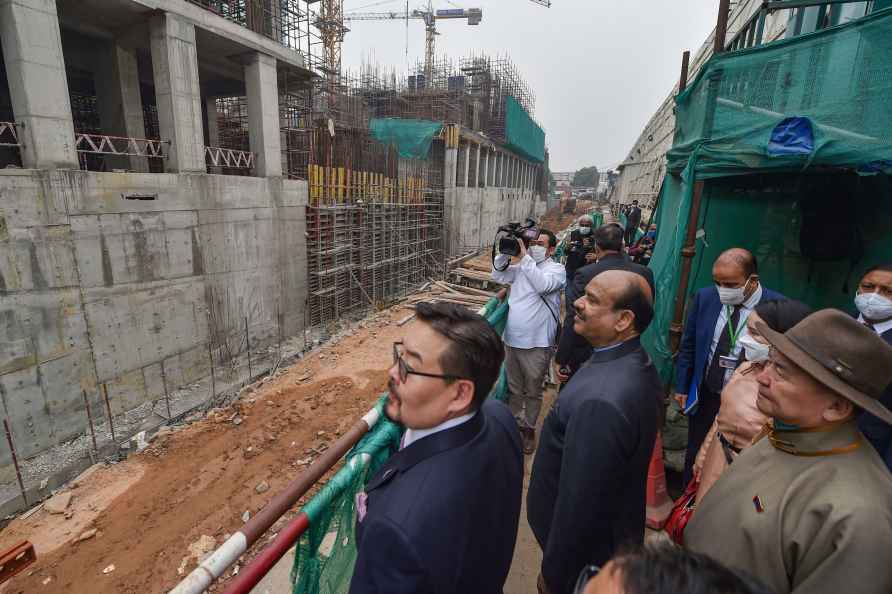 [New Delhi: Lok Sabha Speaker Om Birla with Zandanshatar Gombojav, Chairman of the State Great Hural (Parliament) of Mongolia, and Members of Mongolian Parliamentary Delegation, during their visit to the new Parliament site under construction, in New Delhi, Wednesday, Dec. 01, 2021. ( /PTI] New Delhi, Dec 1 : The proceedings of the Lok Sabha on Wednesday were adjourned till 12 p.m. following the ruckus by the opposition members, who have been protesting against the suspension of 12 Rajya Sabha members and demanding to discuss the Minimum Support Price (MSP). Soon after the House assembled at 11 a.m., Speaker Om Birla initiated the 'Question Hour', the members from the opposition Bench started sloganeering and chanting 'We want justice'. Birla, reminding the members, said that a Mongolian parliamentary delegation was in the visitors' gallery and he welcomed the delegation to India. Amid din, the Speaker continued the question hour, but some opposition members came into the well and started displaying play cards. Meanwhile, the Leader of Opposition Adhir Ranjan Chowdhury said that over 750 farmers have died in the last one year during the protests and the 'government is asking us to apologize'. Birla again tried to convince the agitating members and asked them to go back to their seats and let the House function. "You all are senior members, your conducts are not justified, the House always functions with dignity and decorum. You have brought play cards and are protesting. Your leader was given a chance to speak yesterday," Birla said. But the Speaker's advice fell on the deaf ears, following that Birla adjourned the proceedings of the House till 12 p.m. During the half an hour of the question hour, the members from the DMK and BJP asked questions on the electrification of the rail network in India, steps taken to increase the digital literacy among the rural population and other issues of public importance. The government was scheduled to hold a discussion on the new coronavirus variant Omicron in the Lok Sabha. /IANS

After farm laws repeal, what will happen to the proposed Committee on MSP?

By Nivedita Khandekar New Delhi, Jan 1 : More the things change, the more they remain the same, is an old adage applicable to anything and everything, including the government, irrespective of the p […]

Three-member panel headed by principal secretary (home) to submit its report on Vaishno Devi stampede within a week: J&K govt.

Three-member panel headed by principal secretary (home) to submit its report on Vaishno Devi stampede within a week: J&K govt. […]

Mumbai, Jan 1 : In a New Year shocker, the Maharashtra government has warned of the possibility of 8 million cases and 80,000 deaths as the third wave has apparently set in the state. "Number of […]