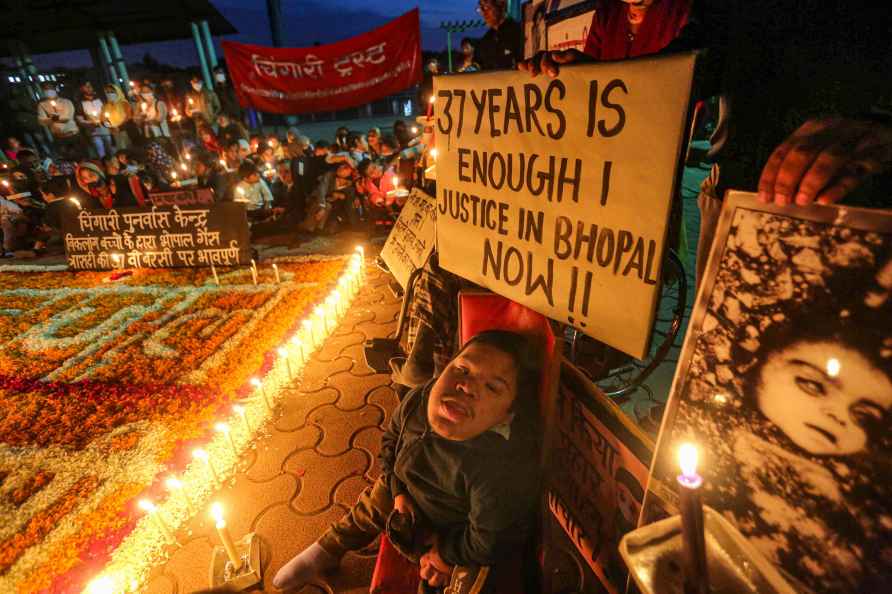 [Bhopal: Children born with congenital disabilities, believed to have been caused by the exposure of their parents to gas leakage in the 1984 Bhopal gas tragedy, along with supporters take part in a candlelight vigil to pay homage to those killed in the disaster, in Bhopal, Tuesday, Nov. 30, 2021. Dec 2, 2021 marks 37th anniversary of one of the world's worst industrial disaster. ( /PTI] By Shambhu Nath Chaudhary Ranchi, Nov 30 : The secret of the locked vault of one of the India's greatest scientists Jagdish Chandra Bose in his house in Jharkhand's Giridhi still remains to be unravelled even 84 years after he passed away on November 23, 1937. The content of the vault has been a matter of speculation among the locals as well as intellectuals and leading scientists. Several discussions were held at the district administration level to open the vault, even a plan was made to invite former President of India A.P.J. Abdul Kalam to Giridih for this purpose. But he could not come due to one or the other reason and the secret behind the safe is still unsolved. November 30 is the birth anniversary of Jagdish Chandra Bose, who was born in 1858 in Mymensingh (now in Bangladesh) in then Bengal Presidency. Giridih, which was also then under the Bengal Presidency and had several relatives of Bose living there, was an area surrounded by forests and since Bose's most important research had been on plants, he had a special attachment to the place. Not only did he frequent Giridih, it is also believed that he spent a lot of time here on scientific research. He spent last years of his life in Giridih only. Very few people knew about the house in which he lived, which is near Jhanda Maidan here. Later, when this came to the notice of the government, then Deputy Commissioner K.K. Pathak acquired this house and named it Jagdish Chandra Bose Smriti Vigyan Bhavan. It was inaugurated on February 28, 1997 by then (undivided) Bihar Governor A.R. Kidwai. However, even then, no step was taken to unravel the mystery behind the locked vault. Ritesh Sarak, a local journalist, who is writing a book on Bose, said that the house contains a replica of a microwave detector on one side, and that of a crescograph on the other - both instruments invented by Bose. The crescograph is the instrument that showed that plants also feel pain like human beings. Photographs related to Bose' childhood, youth, as well as his various other activities during research are kept in the house. Photos of other family members and their friends including his parents are also present here. The pictures show that after his death, a huge crowd had gathered to pay their last respect to the great scientist. Bose carried out several successful researches in physics, amd biology, especially botany, during his lifetime. While Italian scientist Guglielmo Marconi is considered the inventor of the radio, some several articles on Bose suggest that he invented it before Marconi, but did not get credit for it. After this, Bose got involved in the study of plants and trees. He told the world that trees and plants breathe like humans and can feel pain. His experiment surprised several top scientists of the world. As he invented the crescograph, many believe there may be some evidence related to this invention in his locked vault. However, no one knows when - and if at all - the vault will be opened? /IANS

After security breach, PM Modi cancels Ferozepur visit
[** EDS: IMAGE POSTED BY @blsanthosh** Ferozepur: Prime Minister Narendra Modi's convoy stuck on a flyover as the road was blocked by a group of prote

Madrid, Jan 5 : FC Barcelona and Real Madrid begin their Copa del Rey campaigns on Wednesday night with away games against lower division sides, which in Madrid's case will bring back unhappy memories […]

Srinagar, Jan 5 : One terrorist has been killed in an ongoing encounter with the security forces at the Chandgam area in South Kashmir's Pulwama district, officials said on Wednesday. "One terro […]