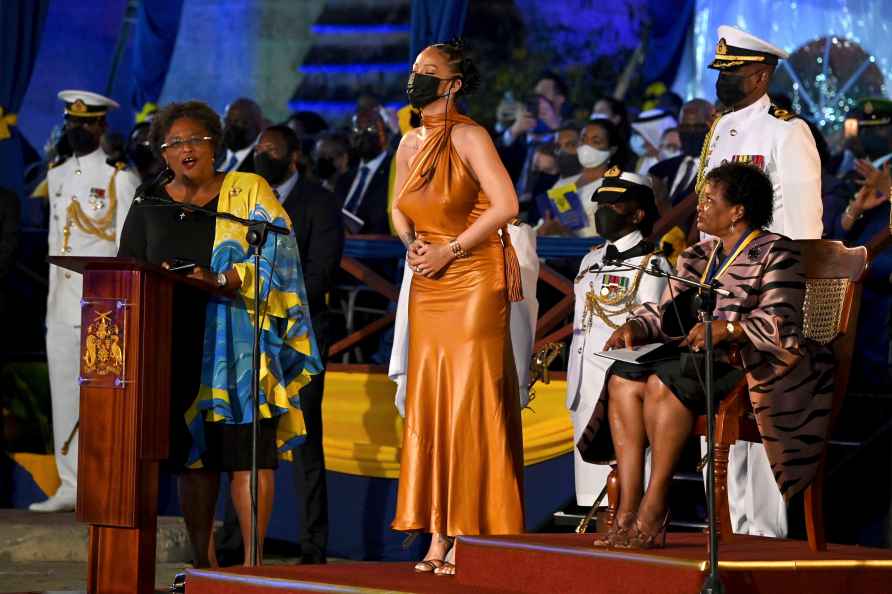 [Bridgetown: Barbados' Prime Minister Mia Mottley, left, and President of Barbados, Dame Sandra Mason, right, honour Rihanna as a National Hero, during the Presidential Inauguration Ceremony, at Heroes Square, in Bridgetown, Barbados, Tuesday, Nov. 30, 2021. Barbados has stopped pledging allegiance to Queen Elizabeth II as it shed another vestige of its colonial past and became a republic for the first time in history. Several leaders, dignitaries and artists, including Prince Charles, attended a ceremony that began late Monday and stretched into Tuesday in a popular square where the statue of a well-known British lord was removed last year amid a worldwide push to erase symbols of oppression. /PTI] Kathmandu, Nov 30 : Former Nepal Prime Minister K.P. Sharma Oli was elected as Chairman of the Nepal Communist Party-UML for the second time on Tuesday, defeating senior party leader, Bhim Bahadur Rawal, by a huge margin. The party is currently holding the 10th national Congress to elect the new party leadership where Oli had imposed his decision on the selection of a new leadership without voting. As past party Chairman, he read out the list of the party office bearers and the central committee on Sunday. But a section of the party leaders opposed Oli's single decision to nominate the party's office bearers and Central Committee members and demanded the elections though they knew that they were sure to lose. After strong reservations from party leaders to his actions, Oli finally agreed to go for elections. As many as 2,175 representatives from across the country voted to elect 301 members for the new Central Committee. As per the election results that are all set to be announced by Tuesday evening, Oli had secured 1,840 votes while his rival, Rawal has obtained just 223 votes, according to the CPN-UML leader, Rajan Bhattarai. The final announcement will be made after completing the counting of votes for different posts but Oli's camp is set to make a sweep. Oli's aides have won the rest of the office bearers' posts including to the Central Committee. Insiders say even though elections happened, it is certain that everyone proposed by Oli is going to win, which will establish Oli's grip on the party. Earlier, Oli who was elected as party Chairman in 2016, tried to pick all posts - one Senior Vice Chairman, six Vice Presidents, one Secretary General, three Deputy Secretaries General, seven Secretaries, and 301 Central Committee members through consensus or without voting. He had proposed consensus candidates for the Central Committee as well, but since nominations have been filed by aspirants, there will be voting only in groups where the number of candidates/aspirants is more than the positions on offer. Oli, who raised the nationalist plank in the 2017 elections against India in the wake of the blockade in the Nepal-India border, won the elections and merged his party with another communist party, Nepal Communist Party-Maoist Centre, and became the Chairman of Nepal Communist Party. As soon as Oli became the Prime Minister in 2018, the relations between Oli and the Maoist Centre Chairman, Pushpa Kamal Dahal aka Prachanda deteriorated. And as relations between Oli and Prachanda eroded further, several other party leaders also supported Prachanda and joined the anti-Oli camp. Later a case was filed in Nepal's Supreme Court against the merger between Oli's UML and Prachanda's Maoist Centre, and in in March 2021, it invalidated the merger. Both parties revived as older, separate entities. But Oli did not welcome the UML leaders who supported Prachanda's bid to unseat him, and these leaders in August formed the Communist Party of Nepal-Unified Socialist, whose Chairman was Oli's long-time aide, and former Prime Minister Madhav Kumar Nepal. /IANS

Hisense announces new product line up for 2022
[Iran: This photo released by the official website of the Iranian Defense Ministry on Thursday, Dec. 30, 2021, shows the launching of Simorgh, or "Pho

SA v IND, 1st Test: India breach Fortress Centurion with a 113-run win over South Africa
[Pretoria: India's bowler Mohammed Siraj, right, picks off the stump et the end of the fifth day of the Test Cricket match between South Africa and In

Patna, Dec 30 : A day after BJP legislator Lakhendra Kumar Raushan faced heat of residents of his home village in Vaishali over the gang rape and murder of a Dalit woman, Lok Janshakti Party-Ram Vilas […]

London: In this photo made available by Kensington Palace on Wednesday, Dec. 22, 2021, Britain's Kate, the Duchess of Cambridge holds a Christmas wreath as she helps to decorate a Christmas tree with […]