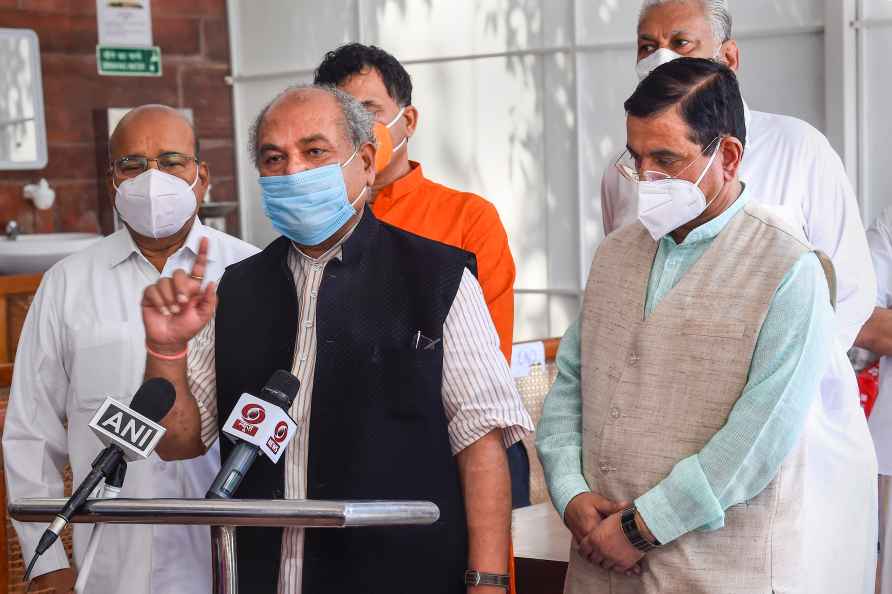 New Delhi, Nov 29 : Amid sloganeering by opposition members, the Farm Laws Repeal Bill 2021 was passed by the Lok Sabha by voice vote even as the opposition kept on demanding a discussion on the same. Immediately after the Union Agriculture Minister Narendra Singh Tomar presented the Bill, opposition members started raising slogans, some left their seats and walked down towards the well, and all demanded a discussion on the Bill. Speaker Om Birla said the discussion will happen if only the members behaved and stopped sloganeering and sat in their respective seats. The members did not relent. The Speaker put the Bill for voice vote and it was cleared within seconds even as the opposition continued sloganeering protesting that there was no discussion. The Lok Sabha was then adjourned till 2 p.m. Soon after, outside the Parliament, NCP leader Supriya Sule told mediapersons, "This is a black day for democracy. The government wants to do 'Mann Ki Baat' (own talk) but does not want to listen to the 'Jan Ki Baat' (people's talk)." Stating that the government was afraid of the discussion, Congress Leader in the Lok Sabha, Adhir Ranjan Chowdhury said, "We wanted a discussion on the three farm laws that were repealed and also a law on the MSP. The government passed the bill without any discussion." Rakesh Tikait, one of the prominent members of the farmers' agitation told media persons, "The government wants there should be no protests but we will not leave the site before MSP is discussed among other issues." Coming down heavily on the fact that the three "anti-Agriculture Laws were passed in Parliament without discussion and have been repealed without discussion," Congress general secretary Randeep Singh Surjewala tweeted: "A debate would make the PM and BJP answerable for a Conspiracy to sell the farming sector at the altar of Crony Friends, Sacrifice of 700 farmers and Not giving MSP (sic)." In counter to opposition leaders' allegations, Union Minister Pralhad Joshi said, "The Prime Minister has shown large heartedness and agreed to repeal the three laws. The farmers' organisations were demanding it; the opposition parties were demanding it. We agreed to their demand and brought in this Bill. The opposition did not cooperate and kept on sloganeering and created ruckus. We have passed it in the Lok Sabha and today itself, we want to pass it in the Rajya Sabha. We appeal to the opposition to cooperate in clearing the Bill in the Rajya Sabha." Incidentally, former Minister and Congress leader, Jairam Ramesh had tweeted right in the morning: "Modi Sarkar wants to push through the 3 farm laws repeal Bill today in Parliament WITHOUT any debate. The passage of the laws 16 months ago was most undemocratic. The manner of repeal is even more so. The Opposition demands a discussion before repeal." Union Minister Ashwini Choubey accused the opposition of deliberately disrupting Parliament. He said opposition is issueless. Talking to IANS, Choubey said: "When the government is repealing all three farm laws, there is no point of creating ruckus." He said Congress which is demanding discussion, has always run away from it. Whenever discussion was initiated, the grand old party boycotted it. The three bills are: Farmers' Produce Trade and Commerce (Promotion and Facilitation) Bill, 2020, Farmers (Empowerment and Protection) Agreement on Price Assurance and Farm Services Bill, 2020 and Essential Commodities (Amendment) Bill 2020. /IANS

Shahjahanpur (UP), Dec 30 : As many as ten persons were arrested and later released for locking up a herd of stray cattle inside a primary school in Uttar Pradesh after the animals damaged standing wh […]