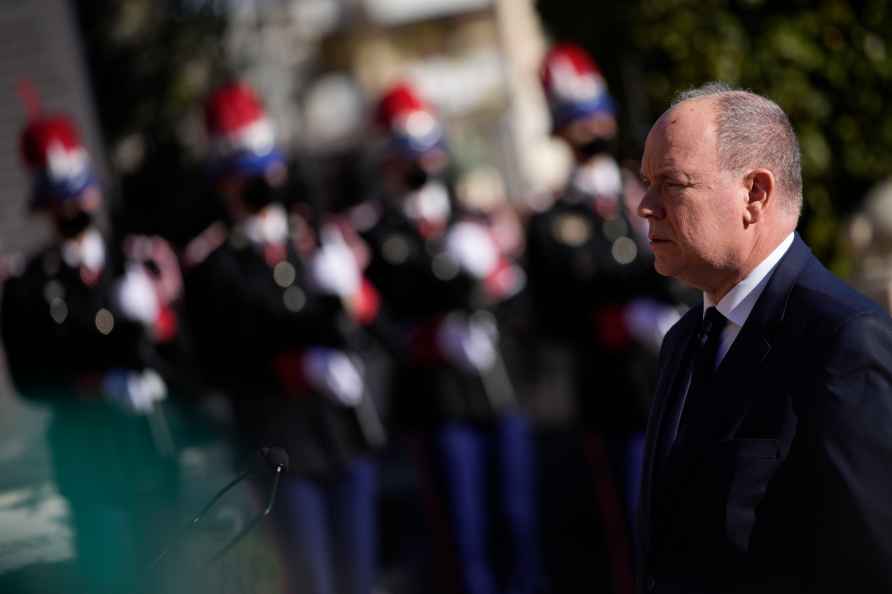 [Monaco: Prince Albert II of Monaco stands for the Monaco national anthem, during a ceremony honoring Joesphine Baker at the Monaco-Louis II Cemetery in Monaco, Monday, Nov. 29, 2021. France is inducting Missouri-born cabaret dancer Josephine Baker who was also a French World War II spy and civil rights activist into its Pantheon. She is the first Black woman honored in the final resting place of France.......s most revered luminaries. A coffin carrying soils from places where Baker made her mark will be deposited Tuesday inside the domed Pantheon monument overlooking the Left Bank of Paris. /PTI] By Sanjeev Sharma New Delhi, Nov 29 : There were key Taliban members among the students who were given scholarship opportunities to study in India, Khaama Press reported, quoting a Wall Street Journal report. Ahmad Wali Haqmal, who is now the spokesperson for Afghanistan's Ministry of Finance was a key Taliban member in the Kandahar University and was later sent to study Human rights in Aligarh Muslim Univesity of India, WSJ reported. Similar Taliban cells operated in other major Afghan cities. In Kandahar, Afghanistan's second-largest metropolis, university lecturer Ahmad Wali Haqmal said he repeatedly asked Taliban leaders for permission to join the armed struggle against the US-backed government after he completed his bachelor's degree in Shariah law, the Wall Street Journal reported. "I was ready to take the AK-47 and go because no Afghan can tolerate the invasion of their country," he recalled. "But then our elders told us no, don't come here, stay over there, work in the universities because these are also our people and the media and the world are deceiving them about us," the report said. "The Taliban sent Haqmal to India to earn a master's degree in human rights from Aligarh Muslim University, he said. When he returned to Kandahar, he was focused on recruitment and propaganda for the Taliban. After the fall of Kabul, he became the chief spokesman for the Taliban-run finance ministry," the Wall Street Journal reported. Undercover Taliban agents -- often clean-shaven, dressed in jeans and sporting sunglasses -- spent years infiltrating Afghan government ministries, universities, businesses and aid organisations, The Wall Street Journal reported. Then, as US forces were completing their withdrawal in August, these operatives stepped out of the shadows in Kabul and other big cities across Afghanistan, surprising their neighbours and colleagues. Pulling their weapons from hiding, they helped the Taliban rapidly seize control from the inside, the report said. The pivotal role played by these clandestine cells is becoming apparent only now, three months after the US pullout. At the time, Afghan cities fell one after another like dominoes with little resistance from the American-backed government's troops. Kabul collapsed in a matter of hours, with hardly a shot fired, the report said. "We had agents in every organisation and department," boasted Mawlawi Mohammad Salim Saad, a senior Taliban leader who directed suicide-bombing operations and assassinations inside the Afghan capital before its fall. "The units we had already present in Kabul took control of the strategic locations," Wall Street Journal reported. Saad's men belong to the so-called Badri force of the Haqqani network, a part of the Taliban that is designated as a terrorist organisation by the US because of its links to al Qaeda. Sitting before a bank of closed-circuit TV monitors in the Kabul airport security command center, which he now oversees, he said, "We had people even in the office that I am occupying today." The 20-year war in Afghanistan was often seen as a fight between bands of Taliban insurgents -- bearded men operating from mountain hide-outsÂ?and Afghan and US forces. The endgame, however, was won by a large underground network of urban operatives. (Sanjeev Sharma can be reached at Sanjeev.s@ians.in) /IANS

Financial crisis looms over Andhra Pradesh
[Paris: French Health Minister Olivier Veran arrives for a hearing with the deputies of the Laws Commission, at the National Assembly in Paris, France

Plea to CJI seeks pre-ponement of hearing on eco reservation in NEET-PG course
[Dibrugarh: Artists sing 'Dihanam' songs as they stage a peaceful protest in support of All Assam Students? Union's (AASU) protest against Assam Agric

Vaccination certificate a must for Magh Mela entry in UP

Prayagraj (Uttar Pradesh), Dec 29 : With the countdown to the annual Magh Mela on, the Yogi Adityanath government has issued an advisory to seers, saints and devotees arriving at the Mela township to […]

Tension erupts after 3 men found dead on bridge in UP