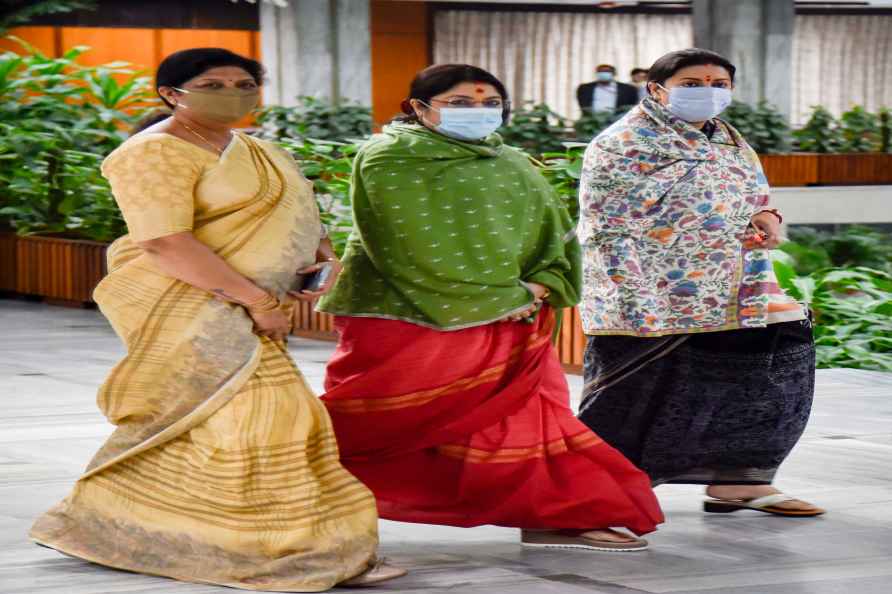 [New Delhi: Smriti Irani, Locket Chatterjee and Ranjanben Dhananjay Bhatt arrive to attend BJP Parliamentary Executive Committee meeting ahead of the Winter Session of the Parliament, in New Delhi, Sunday, Nov. 28, 2021. ( /PTI] New Delhi, Nov 28 : Fissures seem to have arisen in the opposition camp after sources said that the Trinamool Congress has decided not to attend a meeting called by Leader of Opposition in Rajya Sabha Mallikarjun Kharge on Monday, though it attended the government's meeting on Sunday. The Monday meeting was called to discuss joint strategy of the opposition to corner the government on key issues. The Congress and Trinamool do not share good relation since the latter is on poaching spree of the Congress leaders, and sources say that the Mamata Banerjee-led party wants to move away from the Congress shadow in opposition. Congress leaders say that they had invited all opposition parties but was up to them to attend or not. Though the Congress on Friday had managed to persuade 14 opposition parties to skip the Constitution Day celebrations, the Trinamool wants to maintain distance from Congress since Banerjee wants to expand her base outside West Bengal but her foray into national politics may hamper the bigger talk of Opposition unity. The fissures can be seen with the Congress targeting her indirectly but blaming poll strategist Prashant Kishor for poaching its party leaders in Goa, Assam, and Meghalaya. Banerjee, on her recent Delhi visit, did not meet Congress President Sonia Gandhi, maintaining that it is not necessary to meet her each time. However, ahead of the Winter session of Parliament, the Congress, for the sake of forging a strong alliance against the government, is talking to the Trinamool to try and take it on board too. However, suspicions persist as the Meghalaya split - where 12 of the 17 MLAs switched over to the Trinamool - has created a furore in the Congress, which was already facing an onslaught from the BJP in the northeast. /IANS

Eye on Polls: Five women whose political innings will be tested on tricky UP pitch
[Agra: Congress General Secretary Priyanka Gandhi speaks during her interaction with people from the Valmiki community, in Agra, Wednesday, Dec. 29, 2

New Delhi, Dec 29 : The Hero I-League has reported "some positive" COVID-19 cases among "certain teams" and the League Committee has called an emergency meeting later on Wednesday to decide on the fut […]

New Delhi, Dec 29 : Lt Gen Nadeem Anjum Director General (DG) of Pakistan's Inter-Services Intelligence (ISI), has asked all concerned authorities not to release his picture or video footage to the me […]

Geneva, Dec 29 : The overall risk associated with the Omicron variant remains 'very high' which could cause widespread disruption to health systems and other critical services, the World Health Organi […]

Thiruvananthapuram, Dec 29 : Three-time former CPI-M legislator S. Rajendran is likely to be expelled for a year from the party after the Idukki district committee on Wednesday submitted its recommend […]