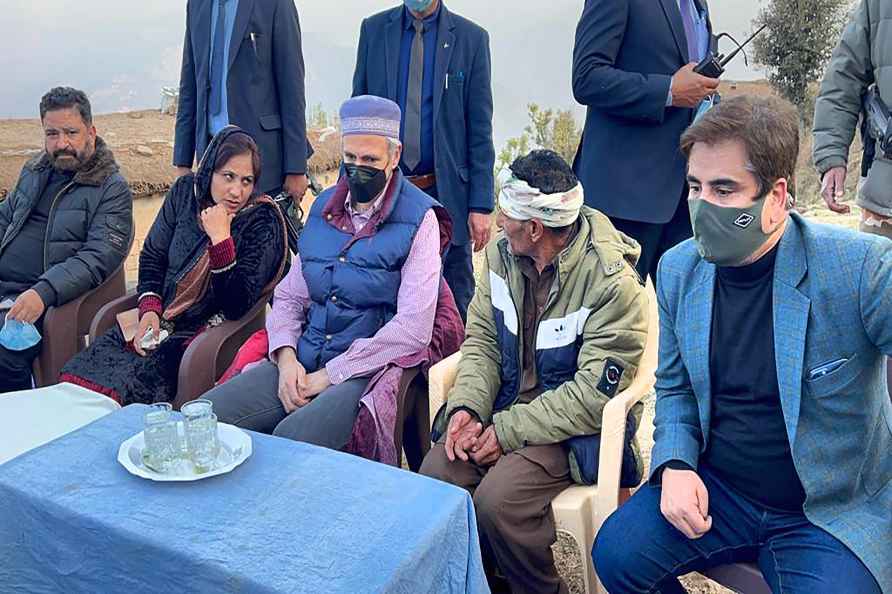 [Ramban: National Conference Vice President Omar Abdullah meets family of Amir Magray, who was killed during Hyderpora encounter, at Famrote village in Ramban district, Saturday, Nov, 27, 2021. ( /PTI] Srinagar, Nov 27 : Former Jammu and Kashmir Chief Minister and National Conference Vice President Omar Abdullah on Saturday visited Famrote village of Gool in Ramban district to express sympathies with the bereaved kin of Amir Magray. Demanding handing over of the body of the deceased to the bereaved family, he also asked the Government to expedite the inquiry into the Hyderpora killings. The Jammu and Kashmir government has ordered a magisterial inquiry in the Hyderpora encounter in which police said four persons including a Pakistani terrorist and his accomplice Amir Magray were killed. The families of Altaf Ahmad, Mudassir Gul and Amir Magray killed during the encounter insisted that their kin had no involvement in militancy and demanded that his bodies of the slain persons be returned to them. Altaf Ahmad and Mudassir Gul's bodies were later exhumed and handed to their relatives. /IANS

NGT disposed of 2,288 matters through video conferencing in 2021

New Delhi, Jan 1 : The National Green Tribunal (NGT) disposed of 2,288 matters and received 2,083 applications through video conferencing in 2021. The Tribunal followed virtual hearings at its a […]

Mumbai, Jan 1 : 'Gulaab Gang' actor Ankit Anil Sharma is quite excited to share the screen with veteran Sanjay Mishra in the award-winning movie 'Turtle'. 'Turtle' is inspired by a real story an […]

Xiaomi 12 Ultra likely to be unveiled in China in Feb

Beijing, Jan 1 : Smartphone brand Xiaomi, which has recently unveiled its Xiaomi 12 series, is now likely to unveil a new smartphone -- Xiaomi 12 Ultra -- in February. According to GizmoChina, a […]