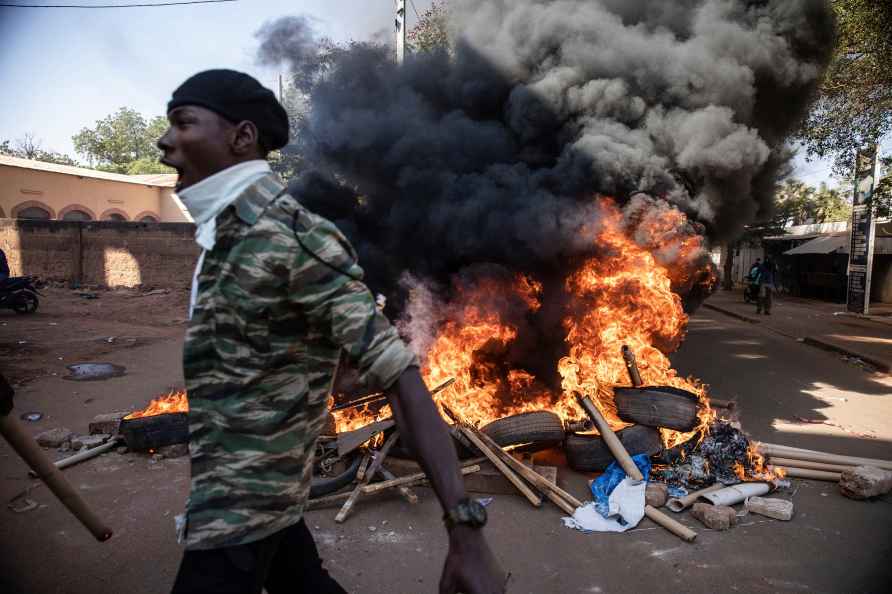 [Ouagadoudou: Protestors take to the streets of Burkina Faso's capital Ouagadougou Saturday Nov. 27, 2021, calling for President Roch Marc Christian Kabore to resign. The protest comes after the deadliest attack in years against the security forces in the Sahel's Soum province earlier this month, where more than 50 security forces were killed and after an attack in the Center North region where 19 people including nine members of the security forces were killed. /PTI] By Sanjeev Sharma New Delhi, Nov 27 : A particular pattern of operation seen in the 26/11 Mumbai attacks -- in which the attackers penetrated deep into the target and then killed as many as possible -- had been seen before in LeT attacks on Indian forces in Kashmir, Rand Corporation had pointed out in a report prepared in 2009 after the Mumbai attacks. The dispersal of the attackers into separate teams indicates an effort to reduce operational risk. Once the attacks began, the failure or elimination of any single team would not have put the other teams out of action. The only possible point of failure for the entire attack was while the terrorists were still at sea enroute Mumbai, the report said. While these tactics were a break from the now common suicide bombings associated with jihadist groups, armed assaults have ample precedent in the annals of terrorism, reaching all the way back to the 1972 Lod Airport attack near Tel Aviv, in which three members of the Japanese Red Army opened fire and hurled hand grenades at the arriving passengers. Barricade and hostage situations were common throughout the 1970s. What was new here was the combination of tactics, the report said. The attackers' purpose, as indicated by the testimony of the surviving terrorist, was to kill as many people as possible. "However, there is some uncertainty that slaughter alone was the sole purpose of the operation's planners. If we compare the 2008 Mumbai attacks to the 2006 Mumbai train attacks, in which seven bombs killed 209 people, or the 1993 Mumbai attacks in which 257 persons died in 13 bomb blasts across the city, it would seem that bombs would have been more effective if body count were the sole criterion," the report said. "Indiscriminate bombings, as in the London and Madrid bombings, have been criticised, even by some jihadists, as contrary to an Islamic code of warfare. So it is possible that by relying on shooters, the 2008 attacks would appear to be more selective, even though the vast majority of those killed in Mumbai were ordinary Indians gunned down at random. It also enabled the attackers to eventually engage the police and soldiers in what their supporters could portray as a heroic last stand," the report said. Security may have been another factor. Based on the pattern of previous terrorist attacks, Indian authorities were focused on truck bombs at hotels. Rail security focused on trying to keep bombs off trains, not armed assailants out of train stations. "An armed assault might also have been more attractive than suicide bombings to the attackers themselves. Once they opened fire, their fate was sealed, but the prolonged nature of the operation enabled them to engage in a sustained slaughter where they could see the results. Still martyrs in their own minds, they could also think of themselves as being more like warriors than mere button-pushing suicide bombers," the report said. The Rand Corporation report noted that all the facilities attacked were soft targets. At no point during the attacks did the terrorists attempt to overcome the armed guards. For the most part, the terrorists attacked unguarded targets, and, even in places where they could expect security forces, their reconnaissance informed them that those forces would be only lightly armed. The main targets included the central train station, the Cama and Albless Hospital, the Leopold Cafe, the Chabad centre, the Trident-Oberoi Hotel, and the Taj Mahal Palace Hotel - the latter target assigned to the only four-man team. Other places attacked along the way were targets of opportunity. Putting aside the drive-by shootings, the train station and the two hotels provided the opportunity for achieving a high body count. The Leopold Cafe (a famous site) and the hotels were dramatic venues for the attacks -- providing the "emotional value" sought by the terrorists. The report said the massacre at the Chabad centre had its own logic. According to transcripts of phone calls between the terrorists and their handlers during the attacks, the terrorists at the Chabad centre were instructed to kill their Jewish hostages in order to "spoil relations between India and Israel". The attackers reportedly used cellphones and a satellite phone, both their own and others taken from their victims. They also carried Blackberries. "A thoroughly pre-planned attack, which Mumbai certainly was, would have required no communications between the terrorist operators and their headquarters. According to a dossier released by the Indian authorities, however, the terrorists were in frequent contact with their handlers, presumably based in Pakistan, during the attacks. In the transcripts of these phone calls, intercepted by the Indian authorities, handlers in Pakistan urged the attackers on, exhorting them to kill, reminding them that the prestige of Islam was at stake, and giving them tactical advice that, in part, was gleaned from watching live coverage of the event on television," the report said. "Despite these exhortations to murder the hostages, some observers believe - and there are reports that the surviving terrorist thought - that the attackers felt that somehow they were going to get out alive. The terrorists called each other during the siege to discuss their routes of maneuver. They also talked to the news media via cellphones to make demands in return for the release of their hostages. This led Indian authorities to think that they were dealing with a hostage situation, which further confounded their tactical response," the report added. (Sanjeev Sharma can be reached at Sanjeev.s@ians.in) /IANS

DDMA to impose weekend curfew in Delhi
[New Delhi: People shop at a wholesale market in New Delhi, Tuesday, January 4, 2022. Weekend curfew to be imposed in the city following spike in COVI

No permission for BJP chief Nadda's rally in Hyd

Seoul, Jan 3 : South Korea has registered a total of 171,673 breakthrough Covid-19 infections so far, which refer to the vaccinated people who were infected with the virus, health authorities said on […]

Cape Town, Jan 3 : The interior of South Africa's National Assembly, the lower house of Parliament, was "extensively destroyed" by a fire, a local official said on Monday. As of 6.50 a.m. (local […]