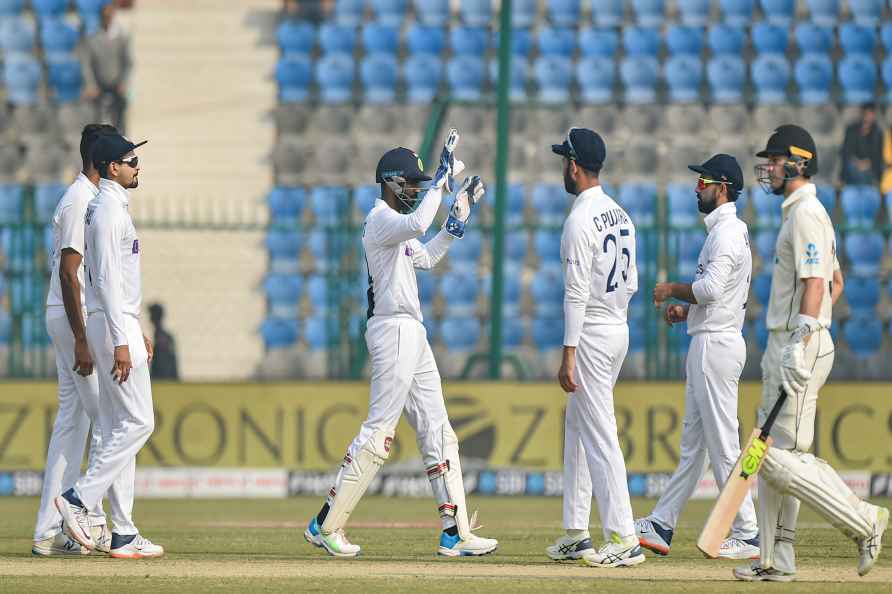 [Kanpur: Indian players celebrate the dismissal of New Zealand batsman Will Young during third day of the first Test cricket match between India and New Zealand, at Green Park stadium in Kanpur, Saturday, Nov. 27, 2021. ( /PTI] Kanpur, Nov 27 : India wicketkeeper Wriddhiman Saha had to be substituted on Saturday, the third day of the first Test against New Zealand at Green Park here, after he developed a stiffness in the neck. The Board of Control for Cricket in India (BCCI) said its medical team was monitoring Saha's progress and that KS Bharat would be keeping wickets in his absence. A statement issued by the BCCI said, "Wriddhiman Saha has stiffness in his neck. The BCCI medical team is treating him and monitoring his progress. KS Bharat will be keeping wickets in his absence." The statement did not mention when Saha would be able to return to keep wickets. Saha has made one run in India's first innings before he was caught by wicketkeeper Blundell off the bowling of Tim Southee. Earlier on Friday, Shreyas Iyer had struck a hundred on debut to prop up India but a five-wicket haul by Tim Southee followed by half-centuries by openers Will Young and Tom Latham helped New Zealand sit on top at the end of day two. After India were bowled out for 345, New Zealand were 129/0 in 57 overs at stumps, trailing the hosts by 216 runs. /IANS

Chennai, Jan 1 : Anudeep K.V., who delivered the superhit Telugu film 'Jathi Rathnalu', will direct Sivakarthikeyan's 20th film, that is tentatively titled '#SK20'. The film, which is produced b […]

Jerusalem, Jan 1 : Two rockets were launched from the Gaza Strip toward central Israel but fell short in the sea, the Israeli army said in a statement on Saturday morning. The rockets were sent […]