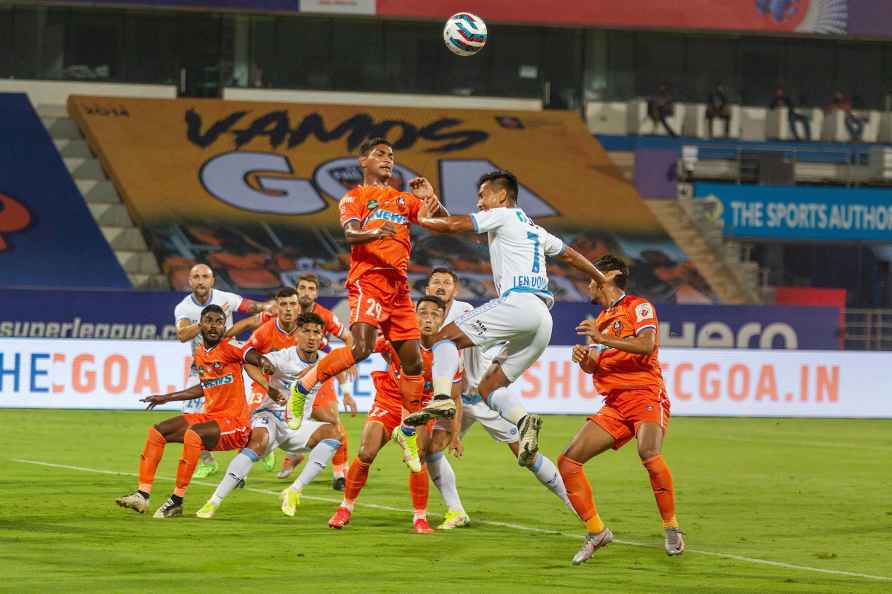 [Goa: Devendra Murgaonkar and Len Doungel of Jamshedpur FC in action during match 8 of season 8 of Indian Super League played between FC Goa and Jamshedpur FC, at the GMC Bambolim stadium in Goa, Friday, Nov. 26, 2021. (ISL/ /PTI] Fatorda, Nov 26 : Hyderabad FC will up against the defending champions Mumbai City FC in the 2021-22 Indian Super League (ISL) match at the Jawaharlal Nehru Stadium in Fatorda, Goa on Thursday. The game between Mumbai City and Hyderabad FC will kick off at 9:30 pm, in what will be the first of its kind in the ISL, moving on from the 5:30 pm starts, which will surely have an impact on the quality of the game. Hyderabad FC head coach Manolo Marquez believes that it will not be an easy game for his side. "We want to win, of course, we can win, but we know the quality of the opponents. Mumbai City know how to manage situations in games and are strong in set-pieces and open play as well," he said. "They want to keep the ball and so do we. So, I am sure it will be a close contest at Fatorda tomorrow," he added. "It is usually better to start the season with a win and many agree that we did not deserve to lose that game. This is football and we now play against a strong tea" next," said Manolo. "But we have chances to beat the strongest teams in the league and we will give our best in this game," he added. Mumbai City are fresh from a comfortable victory over FC Goa, as star striker Igor Angulo started the campaign with a brace. New signing Ygor Catatau was also on the scoresheet while Ahmed Jahouh had a pretty strong outing as well. Mumbai City will be without Vignesh Dakshinamurthy for this game while Manolo Marquez revealed that Halicharan Narzary will miss this clash with the knock he picked up on Tuesday. Hyderabad FC are yet to register a win in four outings against The Islanders but early in the season, there is not too much to separate the two sides, who will battle it out in a closely fought contest. "These statistics are not really important tomorrow. They have a strong squad and we know it will be a difficult game for us," said the Hyderabad FC head coach. /IANS

Cured of Covid? Wait for 1-3 months to buy life policy
Chennai, Jan 19 : Cured of Covid-19 and wanting to buy a life insurance policy? Then wait for a period ranging from one to three months, say life insu

Referendum on amended Belarusian constitution to be held in Feb

Minsk, Jan 21 : Belarusian President Alexander Lukashenko has signed a decree on calling a referendum to amend the country's Constitution, which will be held on February 27. According to Igor Ka […]

Damascus, Jan 21 : The Islamic State (IS) attacked a Kurdish-run prison in Syria's northeastern province of Hasakah in an attempt to free inmates of the terror group, a war monitor reported. The […]