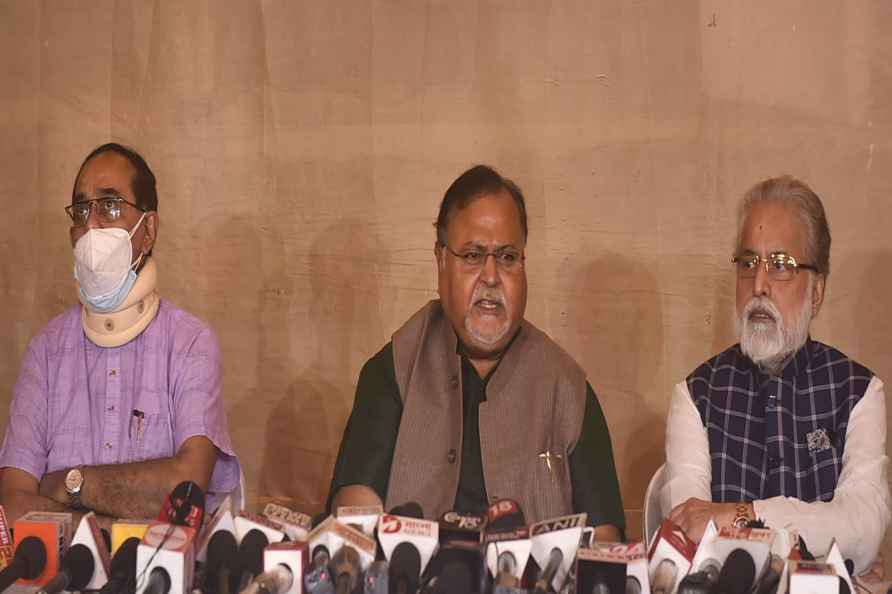 [Kolkata: Senior TMC leader and West Bengal Industry Minister Partha Chatterjee with party leaders Subrata Bakshi and Sudip Bandopadhyay, interacts with media before releasing the candidate list on the party website ahead of Kolkata Municipal Corporation (KMC) elections, at a venue near State Chief Minister Mamata Banerjee's Kalighat residence, in Kolkata, Friday, Nov. 26, 2021. ( /PTI] Kolkata, Nov 26 : With the Kolkata Municipal Corporation(KMC) election round the corner, it is almost certain that the Trinamool Congress -- following the 'One Man One Post' rule, might not give ticket to the outgoing Mayor and Deputy Mayor -- Firhad Hakim and Atin Ghosh, respectively, making way for the next generation candidates to take the responsibility of the party in the corporation. "It is time to bring the second generation of party leaders to the fore. It should start from the corporation and municipality elections. In that case, giving ticket to Firhad Hakim's daughter Priyadarshini instead of him will not be unexpected," a senior Trinamool Congress leader said. "In the same way, instead of a few senior leaders who have different responsibilities in the party, we are thinking of giving tickets to the younger generation so they can work energetically for the improvement of the city. But everything depends on the decision of our leader," the leader added. Not only Hakim or Ghosh, but by strictly implementing the policy, the party might disallow several others from getting tickets this time. According to party insiders, two former Mayor-in-Council Debashis Kumar and Debabrata Majumdar might not get tickets because they have already become MLA. Similarly, two former councillors - Mala Roy and Shantanu Sen might be left behind because the former has become Lok Sabha MP and the latter has been nominated for the Rajya Sabha. The top leadership of Trinamool Congress who are meeting today at Chief minister's residence in Kalighat might discuss the possible candidates and finalise the list. Apart from Chief Minister Mamata Banerjee and party national secretary Abhishek Banerjee, poll strategist Prashant Kishor will also be present in the meeting. There are strong indications within the party that the former BJP union minister who joined Trinamool Congress might become the mayoral candidate and the face of the party in the forthcoming polls. Though there has been no official confirmation about this but according to party insiders Babul Supriyo is 'most favourite' among the candidates for the post because he is preferred by Trinamool Congress All India General Secretary Abhishek Banerjee who is the main decision maker in the party at present. Mamata Banerjee is likely to finalise the list of candidates on Friday. It is expected that the party might announce the name of the candidates any time. The last day for nomination is December 1. /IANS