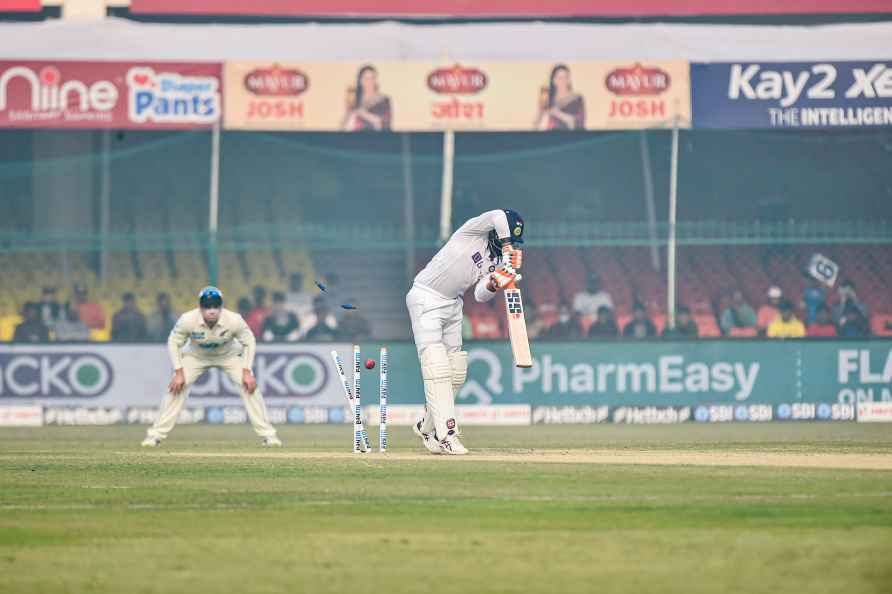 [Kanpur: India's Ravindra Jadeja is clean bowled during the second day of the first test cricket match between India and New Zealand, at the Green Park Stadium, in Kanpur, Friday, Nov. 26, 2021. ( /PTI] By Niharika Raina Kanpur, Nov 26 : India batter Shreyas Iyer scored his maiden Test century on debut during the second day of the first Test against New Zealand at Green Park Stadium here on Friday. Iyer reached the milestone with two runs through point off pacer Kyle Jamieson. Iyer, who received his Test cap from legendary batter Sunil Gavaskar, reached his Test century in 157 balls, adding 25 runs to his overnight score of 75 off 138 balls, including 12 fours and 2 sixes. Iyer was eventually out on 105, chipping a drive to cover off Tim Southee in the 97th over. He walked in when India was 106/3 and saw them being in trouble at 145/4. Since then, Iyer steered the Indian innings en route to becoming the 16th Indian batter (10th at home) to score a century on Test debut. He also became the second Indian batter after Gundappa Viswanath (against Australia in 1969) to score a Test hundred on debut in Kanpur. Iyer started off day two of the ongoing Test with a flick through deep mid-wicket and went on to hit four more boundaries on the way to his maiden Test century coming in the 92nd over. Before Iyer, his fellow Mumbaikar Prithvi Shaw was the last India batter to register a century on Test debut in 2018, scoring 134 against West Indies in Rajkot. Iyer has now completed a hat-trick of Mumbai batters to have scored a debut century for India in Test cricket, following Shaw and Rohit Sharma (2013 against West Indies). Though Iyer had a risky start in getting off the mark off left-arm spinner Ajaz Patel, he oozed confidence and class while absorbing the pressure and then taking the attack towards the New Zealand bowlers. Iyer has joined the elite club of Indian batters to score Test century on debut, which includes Lala Amarnath, Deepak Shodhan, AG Kripal Singh, Abbas Ali Baig, Hanumant Singh, Gundappa Vishwanath, Surender Amarnath, Mohammad Azharuddin, Pravin Amre, Sourav Ganguly, Virender Sehwag, Suresh Raina and Shikhar Dhawan apart from Sharma and Shaw. It has been a pretty eventful year for Iyer, who missed a chunk of international cricket, IPL and was ruled out of Royal London One-Day Cup appearance for Lancashire due to a dislocated shoulder while fielding during the first ODI against England at Pune on March 23. He made a return to competitive cricket during the second half of IPL 2021 in the UAE and made it to being a travelling reserve in India's squad for the men's T20 World Cup. After his second Test call-up, Iyer had posted a video on his Instagram account on Tuesday, in which he shared visuals of his treatment and then he showed pictures of a photoshoot in Test jersey. Surely, it will be a debut to remember for a long time for Iyer. /IANS

US Fed expected to pave way for rate hike in March

Washington, Jan 25 : The US Federal Reserve is expected to use this week's policy meeting to pave the way for raising interest rates in March for the first time since the onset of the Covid-19 pandemi […]

Rupee falls 18 paise to close at 74.78 (provisional) against US dollar.

Battle for UP: Transgender to contest Agra Cantt seat

Agra, Jan 25 : A 26-year-old transgender, Radhika Bai, is all set to contest the Uttar Pradesh Assembly polls as an Independent from the reserve Agra Cantt constituency. Her candidature was appr […]