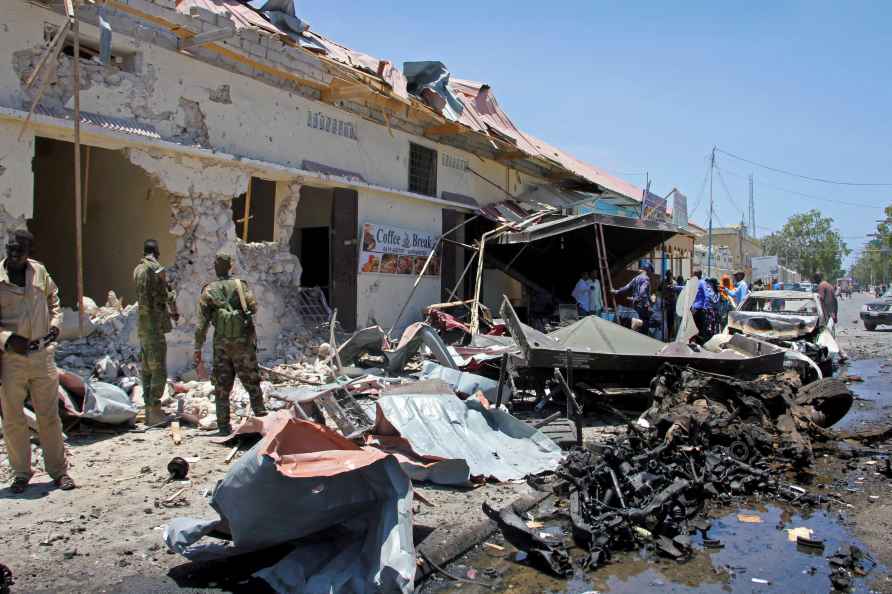 Mogadishu, Nov 25 : At least eight people were confirmed dead and 17 injured in a suicide car bombing here early Thursday, the police said. A police officer at the scene told Xinhua that the death toll could rise after a suicide bomber targeted a convoy escorting foreign security forces near a local school in the Hodan district in Mogadishu. "At least eight were killed and 17 others injured in the blast. The blast occurred in front of Muasir school and children are among the casualties," the police officer, who declined to be named, said on the phone. The police said the target was a convoy belonging to a security firm that guards the UN personnel who were reportedly travelling from Gordon training camp to Halane base camp. Al-Shabab militants have claimed responsibility for the latest attack in the restive city, Xinhua news agency reported. The Somali National Army backed by the African Union Mission in Somalia drove al-Shabab out of Mogadishu in 2011, but the terror group is still capable of conducting attacks, targeting government installations, hotels, restaurants and public places. /IANS

Terrorist killed in encounter at Kupwara in Kashmir
Srinagar, Jan 1 : One terrorist has been killed in an encounter between terrorists and security forces at Jumagund area of North Kashmir's Kupwara dis

Taliban destroying graves of dead rivals
New Delhi, Jan 1 : Since seizing power in August last year, Taliban militants in Afghanistan have been accused of vandalising or destroying the graves

Last surviving terrorist involved in Pulwama attack likely killed in gunfight: Police
Srinagar, Jan 1 : The Jammu and Kashmir Police said on Saturday that one of the terrorists killed in the Anantnag encounter on December 30 last year w

San Francisco, Jan 2 : Tesla founder and CEO Elon Musk took to Twitter to reveal how he chose Ashok Elluswamy from India to work as an autopilot team director at his electric vehicle company. El […]

London, Jan 2 : A research station of Belgium in Antarctica has been hit by an outbreak of Covid-19, even after workers were being fully vaccinated. Since December 14, at least 16 of the 25 work […]

Hyderabad: Popular carnival 'Numaish' is back despite Omicron scare

By Mohammed Shafeeq Hyderabad, Jan 2 : Hyderabads favourite trade fair is back after a gap of one year but the spike in Covid-19 cases and the threat of the new variant Omicron may dampen the spirit […]